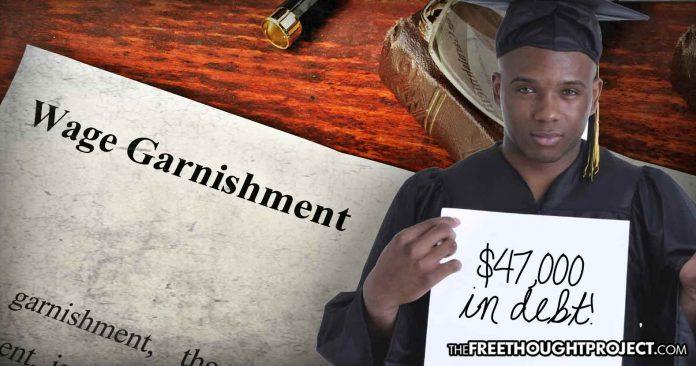 As government subsides continue to flow into colleges across the country, the price of tuition continues to skyrocket, with some rates shooting up nearly 400% since 2000. Over the same period, as the price of college went up, median income in the US went down. This created the perfect storm for what we are currently witnessing right now—a black hole of student loan debt.

As more kids are told they need college for jobs—instead of going to trade school—they take advantage of these subsidized programs, which aren’t enough. So, they have to take out more loans to pay for school.

Because of this trend, Americans now owe over $1.56 trillion in student loan debt, spread out among roughly 45 million borrowers. That’s about $521 billion more than the total U.S. credit card debt.

Debt is not necessarily a bad thing as borrowing money to further your chances of making more money in the future can be a good plan—sometimes.

However, because of the subsidies, more kids going to college means more kids graduate which in turn floods the workforce with similar college degrees which makes it harder to use that business or general studies degree to find work. Many of these young adults entering the work force have a difficult time finding a job and end up in low-paying positions.

These low-paying jobs make it extremely difficult to pay back the mountain of debt many of them have accrued while seeking higher education. This, in turn, leads to default on a massive scale and a lifetime of debt.

According to the government statistics, 11.5% of student loans are 90 days or more delinquent or are in default. That is nearly 200 billion dollars.

Defaulting on your student loans, however, does not let you out of them. Student loans are treated differently than say, your car or house loan. You cannot file Chapter 7 or Chapter 13 bankruptcy to get rid of them. Unless you can prove, in extremely rare instances, that your loans are providing undue hardships on your life, like being homeless, then you will go to the grave forever owing them.

While forever owing them was okay to some who simply choose not to pay, that could all be about to change. Thanks to a new proposal, currently making its way through the Senate, student loan borrowers could soon have their loan payments directly taken from their paychecks.

Student loan debt holders currently have a myriad of ways to attempt to back their debt—14, in fact. However, as CNBC points out, under Alexander’s proposal, there would be just two repayment routes: one in which borrowers’ monthly bills are capped at 10 percent of their discretionary income and another that spreads their payments out over a decade. Employers would be responsible for taking the funds from their employees’ paychecks and sending them to the government. (Of course, student loan borrowers currently can set up automatic payments with their lender. They also typically get a discount on their interest rate for doing so.)

“I think this proposal is likely to become law, after some tweaks,” said Mark Kantrowitz, a student loan expert.

“For borrowers with tight budgets that need to be navigated on a monthly basis, forced automatic payroll withholding may mean diverting money away from rent, heat or food in order to pay their student loans,” a report by the National Consumer Law Center states.

Supporters of the legislation, however, attempt to dispel the criticisms by claiming the payments will be “voluntary.” But the current system is voluntary right now. If these paycheck deductions will be voluntary, why even pass such a law?

The slippery slope of such a move could end up with debtors prisons or fines, or police action and should be avoided.

Of course, the best solution to student loan debt is not getting into it. The idea that all people have to go to college to be successful simply isn’t true. There are many trade schools—in all sectors, like medical, technological, and financial—which cost a fraction of what college does from which graduates can be earning six figures in only a few years. Trade school graduates leave school prepared for the industry they enter, where they can earn much higher wages than many four-year degree-holders.

Moreover, according to a report out of The Wall Street Journal, college students aren’t learning much. According to the WSJ, “At more than half of schools (studied), at least a third of seniors were unable to make a cohesive argument, assess the quality of evidence in a document or interpret data in a table.”

So much for higher “learning.”