Too many Christians shy away from the social gospel, Pope Francis said Monday, because they are afraid the Church will end up looking like the communist party.

God asks us lots of uncomfortable and inconvenient questions, the pope said in his homilyat morning Mass at the Santa Marta residence in the Vatican, just like he did in the garden of Eden, asking Cain, “Where is your brother?” knowing full well that Cain had killed his brother Abel.

We are all responsible for one another, Francis said, especially for the poor and needy, even though we often try to back out of this duty.

“We ease our conscience a little by giving alms, as long as it does not hurt too much,” he said, because we fear that “with these social things the Church ends up looking like the communist party and this bothers us. Fine, but it was the Lord who said, ‘Where is your brother?’ Not the party, the Lord.”

God’s question is embarrassing, the pope said, and Cain’s answer is an attempt to wiggle out of the embarrassment and “escape God’s gaze,” Francis said. “Am I my brother’s keeper?” he asks.

Jesus, too, often asks embarrassing questions in the gospel, he said. He asked Peter the uncomfortable question, “Do you love me?” not once but three times, and in the end, “Peter did not know what to answer.” Jesus asked the disciples, “What do people say that I am?” but then gets more personal, saying, “But you, who do you say that I am?”

“Surely this is an embarrassing question,” Francis said.

But God’s question to Cain — “Where is your brother?” — is really a question He asks each of us today, Francis said, and it is an uncomfortable question.

With “your brother,” he said, Jesus means “the hungry, the sick, the prisoner, the persecuted for justice’s sake.”

“Where is your brother?” – “I do not know” – “But your brother is hungry!” – “Yes, yes, he must be at lunch at the parish Caritas; yes, surely they will feed him,” the pope dramatized.

“Where is your other brother, the sick one?” – “Surely he is in the hospital!” – “But there is no room in the hospital! Do you have any medicines?” – “But this is his thing, I cannot get involved in the lives of others, he must have relatives who can give him medicine.”

“And we wash our hands,” Francis said.

“Where is your brother, the prisoner?” – “Ah, he is paying what he deserves. He really messed up, he has to pay for it. We are tired of so many criminals on the street; let him pay.”

“I would like each one of us take this word of the Lord as if it were addressed to us personally,” the pope said. 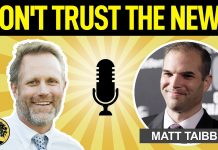