PayPal CEO Dan Schulman admitted to the Wall Street Journal that they work with the far-left Southern Poverty Law Center (SPLC) to decide who to blacklist from their platform.

His conversation with the Wall Street Journal came just one day after PayPal banned this reporter from using their platform.

Citing “diversity and inclusion” as the most important values for the company, he lays out their relationship with the SPLC in making blacklisting decisions.

“Businesses need to be a force for good in those values and issues that they believe in. It shouldn’t come from backlash or people taking heat on it, because then it’s in response, as opposed to the definition of who you are and then how you react to the context that you find yourself in,” the CEO of PayPal explained, before stating that 2017’s deadly Unite the Right rally was the catalyst for their blacklisting of conservatives. (This is despite the fact that many of those blacklisted from PayPal, including Gavin McInnes, Laura Loomer, and this reporter have been opposed the rally since day one.)

Schulman, a far-left donor to Hillary Clinton, also discussed the difficulty in finding “the line between free speech and hate,” stating that “nobody teaches it to you in college. Nobody’s defined it in the law.”

So it appears that he chose to go to the SPLC, who were forced to pay an anti-radical Islam activist, who is a Muslim, millions for defaming him as an anti-Muslim extremist.

“There are those both on the right and left that help us. Southern Poverty Law Center has brought things. We don’t always agree. We have our debates with them. We are very respectful with everyone coming in. We will do the examination carefully.”

“We’ll talk when we don’t agree with a finding: We understand why you think that way, but it still goes into the realm of free speech for us.”

Not only that, but blacklisting from financial institutions has taken an even more extreme turn, with Chase Bank shutting down bank accounts belonging to numerous conservatives, including Proud Boys’ Chairman Enrique Tarrio, Rebel Media contributor Martina Markota, and pro-Trump veteran Joe Biggs. 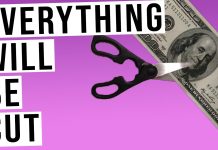 In his ‘most important speech ever’, Trump vows to protect US election system from ‘coordinated assault & siege’