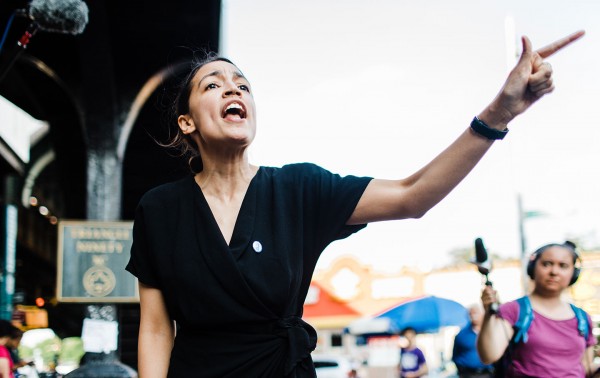 If you have wondered how a woman who lied about where she grew up, lied about the college she attended, lied about her credentials, was too stupid to understand why she wasn’t paid prior to her swearing in, professed she did not know where to find an apartment in Washington DC, didn’t know what branch of government she was elected to, ever got elected to Congress, this article will go a long way to explaining that answer. Ocasio Cortez is the epitome of a Marxist-Leninist and she is not even aware of what she is because she is following the George Soros script of how to take down a country from within. What is amazing is why anyone would listen to this utter nonsense. This fact alone explains how dumbed down America has become. The Green New Deal contains nothing that is traditionally American. Here is the story of the planned demise of the American economy and constitution via the radical left wing of the Democratic Party. However, at the end of the day, this mouthpiece for the UN Agenda 2030 and George Soros, is attracting attention simply repeating what she is told to say.

Why Does a First-Term Member of Congress Warrant Incessant Publicity from the MSM?

The answer to that question is very simple. Ocasio-Cortez is espousing the message that the globalists want the American to be inundated with. Ocasio Cortez is barely smart enough to parrot the words of globalism and Agenda 2030, like a MSM newscaster reading off of a teleprompter. This article will go a long way in demonstrating that the Green New Deal and extreme leftist policies are not about people like Ocasio Cortez, who’s barely smart enough to pour urine out of her globalist infested boots, this article is about the message that people like Ocasio Cortez have been chosen to spread the message of eugenics and population control of the globalists. This is why she is getting wall-to-wall mainstream news coverage.

The  Globalists Are the Ultimate Fear Mongers

Has anyone noticed that when Ocasio-Cortez announced that the Earth had 12 years left to save all lives on the planet, and that her 12 years ended in 2030? That corresponds to the announcement made by the UN, the creator of the Agenda 2030, that they will be ruling authority on the planet by 2030. Yes, I know that Ocasio Cortez is dumber than box of rocks. However, and the MSM newscasters demonstrate everyday in each and every broadcast, that anyone can read off of a teleprompter. And in Ocasio Cortez’s case, her teleprompter is being controlled by the Eugenics and depopulation wing of the New World Order that resides within the walls of the United Nations. Unfortunately, about half of the country will take her warning seriously and as the 2030 year approaches,these sheep will be willing to do anything that globalists tell them they must do to survive, including turning the planet over to the globalists to do what they see fit to do.

Forgive her lord for Ocasio Cortez knows not what she says. That is precisely what makes her such a good choices to promote the globalists depopulation agenda.
Here is the latest pearl of wisdom from Ocasio-Cortez:

“Our planet is going to hit disaster if we don’t turn this ship around and so it’s basically like, there’s a scientific consensus that the lives of children are going to be very difficult, and it does lead, I think, young people to have a legitimate question, you know, ‘Is it okay to still have children?”

Ocasio-Cortez even went as far to say that all young people should give up the idea of having children because of the scientific consensus (born from the scientism of Bill Gates and Adolph Hitler. Mark my words America, forced vaccinations and mandatory sterilizations are the next thing that will come out of Ocasio Cortez’s puppet controlled, ignorant mouth.

Ocasio-Cortez has placed ultra-liberal, Senator Dianne Feinstein (D-CA), in her most liberal crosshairs over her failure to support the New Green Deal. This occurred over an incident that happened in Feinstein’s office, recently, when a far-left fringe group tried to pressure Feinstein into supporting the Green New Deal. What’s it say when even Feinstein is not on board with the insanity an depopulation strategies of the New Green Deal?
In one sense is heartening to see that even someone like Feinstein, is not on board with this extreme leftist agenda. However, there are a lot of people who think that his is perfectly fine.

“The present vast overpopulation, now far beyond the world carrying capacity, cannot be answered by future reductions in the birth rate due to contraception, sterilization and abortion, but must be met in the present by the reduction of numbers presently existing. This must be done by whatever means necessary.”

“One America burdens the earth much more than twenty Bangladeshes. This is a terrible thing to say in order to stabilize world population, we must eliminate 350,000 people per day. It is a horrible thing to say, but it’s just as bad not to say it.”