Unless the Fed is going to start buying millions of homes outright, prices are going to fall to what buyers can afford.

There are two generalities that can be applied to all asset bubbles:

1. Bubbles inflate for longer and reach higher levels than most pre-bubble analysts expected

2. All bubbles burst, despite mantra-like claims that “this time it’s different”

The bubble burst tends to follow a symmetrical reversal of very similar time durations and magnitudes as the initial rise. If the bubble took four years to inflate and rose by X, the retrace tends to take about the same length of time and tends to retrace much or all of X.

If we look at the chart of the Case-Shiller Housing Index below, this symmetry is visible in Housing Bubble #1 which skyrocketed from 2003-2007 and burst from 2008-2012.

Housing Bubble #1 wasn’t allowed to fully retrace the bubble, as the Federal Reserve lowered interest rates to near-zero in 2009 and bought $1+ trillion in sketchy mortgage-backed securities (MBS), essentially turning America’s mortgage market into a branch of the central bank and federal agency guarantors of mortgages (Fannie and Freddie, VA, FHA).

These unprecedented measures stopped the bubble decline by instantly making millions of people who previously could not qualify for a privately originated mortgage qualified buyers. This vast expansion of the pool of buyers (expanded by a flood of buyers from China and other hot-money locales) drove sales and prices higher for six years (2012-2018).

As noted on the chart below, this suggests the bubble burst will likely run from 2019-2025, give or take a few quarters.

The question is: what’s the likely magnitude of the decline? Scenario 1 (blue line) is a symmetrical repeat of Housing Bubble #2: a retrace of the majority of the bubble’s rise but not 100%, which reverses off this somewhat higher base to start Housing Bubble #3.

More realistic analysts would probably agree that if the current slowdown (never say recession, it might cost you your job) gathers momentum, some decline in housing prices is possible. They would likely agree with Scenario 1 that any such decline would be modest and would simply set the stage for an even grander housing bubble #3.

But there is a good case for Scenario 2, in which price plummets below the 2012 lows and keeps on going, ultimately retracing the entire housing bubble gains from 2003.

Why is Scenario 2 not just possible but likely? There are no more “saves” in the Fed’s locker. Dropping interest rates to zero and buying another trillion in MBS won’t have the same positive effects they had in 2009-2018. Those policies have run their course. 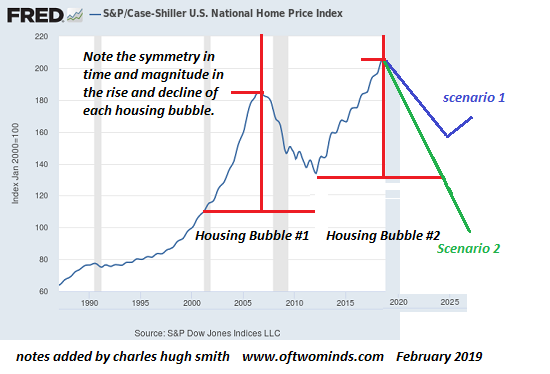 Among independent analysts, Chris Hamilton is a must-read for his integration of demographics and economics. Please read (via Zero Hedge) Demographics, Debt, & Debasement: A Picture Of American Insolvency if you want to understand why near-zero interest rates and buying mortgage-backed securities isn’t going to spark Housing Bubble #3.

Millennials are burdened with $1 trillion in student loans and most don’t earn enough to afford a home at today’s nosebleed prices. When the Fed drops the Fed Funds Rate to zero, it doesn’t follow that mortgage rates drop to zero. They drop a bit, but not enough to transform an unaffordable house into an affordable one.

Buying up $1 trillion in sketchy mortgages worked in 2009 because it bailed out everyone who was at risk of absorbing huge losses as a percentage of those mortgages defaulted. The problem now isn’t one of liquidity or iffy mortgages: it’s the generation that would like to buy homes finds they don’t earn enough, and their incomes are not secure enough, to gamble everything on an overpriced house that chains them to a local economy they might want to leave if opportunities arise elsewhere.