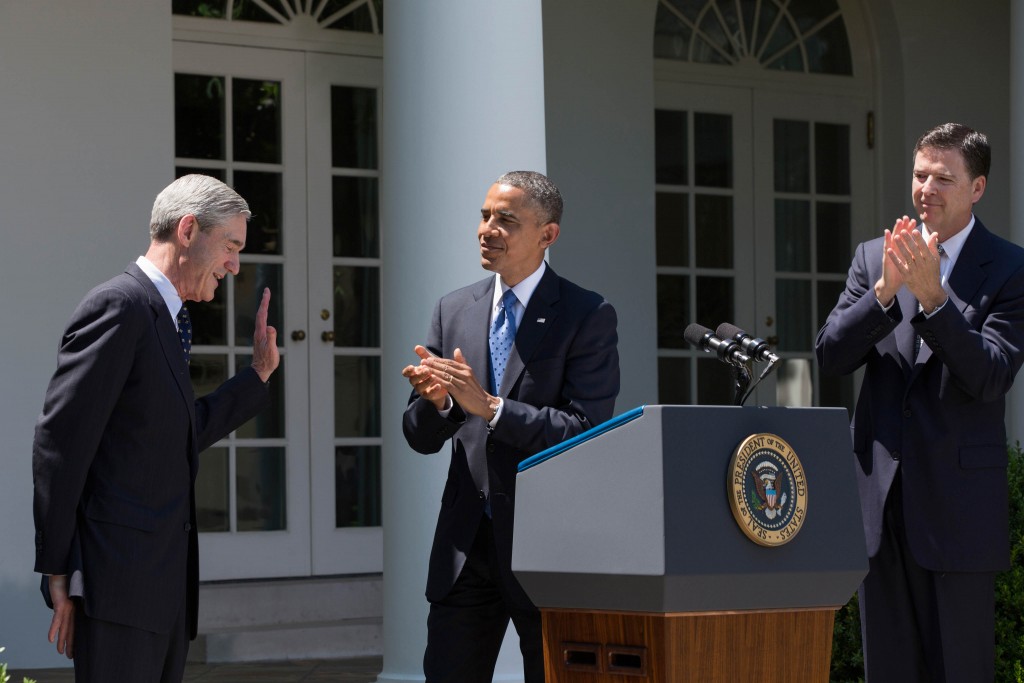 For the first time, my family is having discussions about possibly leaving the country. The topic centers around the radical proposals from the women of tyranny in the Democratic Party, namely, Elizabeth Warren (the government will own your business when I am President), Ocasio Cortez (there will be no businesses left when the (Gang-Green New Deal is implemented) and Kamala Haris (70% tax rates). However, there is a another more compelling reason for someone like the Hodges family to consider leaving the country. The reason is called self-preservation.

In this article, I am going to flashback to a few of the deeds committed by Robert Mueller. For a reference point, I am going to cite the Gateway Pundit and how Mueller, committed a felony by tipping off CNN as to the impending arrest of Roger Stone. Then I am going to represent the Uranium One scenario that should have landed Clinton, Obama, Comey and Mueller in prison for treason when they conspired to sell uranium to the Russians in order to enhance their capability to produce nuclear weapons. Finally, Mueller will be shown, in hindsight to have aided and abetted the criminal activities of Mafia Kingpin, Whitey Bulger and then had him murdered in a federal penitentiary when the Bulger case was hitting to close to home.

A REVIEW OF THE OF THE WELL-DOCUMENTED AND PREVIOUSLY RELEASED INFORMATION BEGS THE QUESTION:

DOES ANY REASONABLE AND KNOWLEDGEABLE PERSON BELIEVE THAT THEY PEOPLE, THE MINIONS OF THE DEEP STATE WILL HESITATE TO ROUND OF MILLIONS OF CONSERVATIVE AMERICANS, PARTICULARLY CHRISTIANS AND SEND THEM FOR FINAL DISPOSITION TO A FEMA CAMP?

Why not put Charles Manson in charge of investigating criminal actions by various cults in this country? Let’s bring Hitler back to life and have him investigate the topic of FEMA Camps, or have  Bill Clinton give a speech on fidelity in marriage, or Richard Nixon on honesty in government? When true history is done judging the events that have shaped the direction of the country, it will show that Robert Mueller is one of the darkest figures to ever serve in government.

From the Gateway Pundit:

For weeks, we have been hearing CNN claim again and again that their presence at Stone’s home ahead of the FBI’s pre-dawn raid was a combination of “luck” and good reporting. They have since built on that fairy-tale, describing their propagandist filming of Stone’s arrest the result of watching “unusual grand jury activity” in the days leading up to January 25th.

However, we at The Gateway Pundit reported exclusively how the metadata on a draft copy of the indictment obtained by a CNN reporter and sent to Roger’s attorney after his arrest showed a save date of two days prior to the January 25th unsealing of the court documents following the Stone’s arrest. This proved that CNN illegally obtained a copy of the grand jury indictment, and now Mr. Stone’s attorneys are demanding the Mueller’s office explain themselves.

According to the filing, Stone is laying out exactly how CNN came into possession of the illegally leaked document, which lead to their “stake out” in front of Stone’s South Florida home an hour before the FBI arrived on scene. Last week, home surveillance video of the raid was released by Infowars, and showed FBI agents coordinating with CNN to position their film crew to televise Mr. Stone’s arrest.

Stone Motion To Show Cause … by on Scribd

This was meant to taint the jury pool and frame the longtime Trump advisor as some sort of violent criminal mastermind that required a heavily armed 29-member FBI strike force raid on his home, despite Stone being charged with non-violent process crimes on immaterial matters. Roger’s hearing impaired wife Nydia was even dragged from her bed barefooted onto the front lawn in the Gestapo-style raid and arrest.

What role did Robert Mueller play in the illegal and conflict of interest and very cozy relationship between the FBI and the Boston Mafia figures that resulted in multiple murders, blackmail, RICO violations, witness tampering, and many more crimes involving FBI complicity under the direction or Robert Mueller?

Special Counsel Robert Mueller, appointed to remove Trump from office was presented by the mainstream media (MSM) as this pristine man of impeccable integrity when nothing could have been further from the truth. Both Mueller and former and disgraced FBI Director James Comey had their images crafted by the MSM in the same manner.   However, it has now been demonstrated that Comey leaked classified information that he thought would be damaging to Trump. He committed perjury to Congress. Comey should be in prison not making book deals. And one can be certain that a book deal awaits Mueller as well should he be able to remove Trump. Both men are lying, extreme left-wing freaks who should be in prison.

Of the two men, Robert Mueller’s is much more criminal than Comey’s.

Comey should not necessarily be charged with murder, Mueller should. Investigative journalist Sarah Carter’s blog, Questions Still Surround Robert Mueller’s Boston Past, published on March 20th, raises serious legal concerns regarding Mueller’s past. This is in reference to what is often referred to as The Whitey Bulger FBI Mob Case.

The New American detailed recounted the 1998 Whitey Bulger case entitled as  FBI Covering for Criminals, which was about the murderous boss of Boston’s notorious Winter Hill Gang, Whitney Bulger as his gang of Irish Mafia carried out a reign of murderous terror under the protection of the FBI who was under the direction of then US Attorney to Boston Robert Mueller and the cover up continued after Mueller’s appointment as FBI Director.

Time after time, Massachusetts state and local police had their elaborate, years-long investigations of Bulger foiled by FBI interference and at the center of it all was Robert Mueller.

FBI Special Agent John Connolly and John Morris, who was in charge of the FBI’s Boston Organized Crime Squad, were Bulger’s protectors and would tip him off to investigations and wiretaps by other police agencies. The corruption was so well known FBI that Martin Scorcese made a 2006 film about the case called The Departed. The movie contained a star studded cast of Jack Nicholson, Leonardo DiCaprio, and Matt Damon.

America, ask yourself a question, who was President in 1994? Who was his wife? This figures prominently in the latter part of this article.

What was Mueller’s role in all of this?

Eventually, FBI handler, John Connolly tipped off Bulger that he was about to be arrested. He escaped justice for 16 years. When he was finally caught, in 2011, he was convicted of 32 counts of RICO, including 19 murders. This is who Robert Mueller’s FBI was protecting.

While Bulger was on the run, his FBI partners in crime, Con and Morris, were arrested and indicted. In 2008 Connolly was convicted for his role in the murders of FBI informant John B. Callahan and Oklahoma businessman Roger Wheeler. Connolly’s boss, John Morris, who reported directly to Mueller, was allowed to escape jail by testifying against his former colleague in crime.. Clearly, as part of this sweat heart plea deal, Morris’ testimony never touched Mueller.

According to Boston Globe columnist Kevin Cullen who wrote an article entitled, A lingering question for the FBI Director. In his title, Cullen was referring to was then-Director Robert Mueller, who had previously been one of the DOJ attorneys assigned to investigate the criminal operation of Bulger and the FBI’s handling of the matter.  Cullen was outraged at Mueller’s conduct in covering up for Bulger, and so much so that Cullen opposed Mueller’s reappointment as FBI Director. Part of Mueller’s cover up was related to the Albano case in which the DOJ and the FBI framed four men for a 1965 gangland murder.  Mueller engaged in cover up after cover up because the Bulger Irish Mafia was making certain FBI officials, including Mueller, who would enhance his reputation by giving up Bulger’s mafia opposition for prosecution and FBI frame-ups were part of the practice of the day. Eventually, 36 years later, the four men would be exonerated. Two of the men died in captivity. It is hard to believe that Mueller was not prosecuted for his role in these matters.

Famed Attorney, Alan Dershowitz, confirms this account in an interview he gave to Newsmax in which he ripped the integrity of Mueller as Special Prosecutor.

He’s the guy who kept four innocent people in prison for many years in order to protect the cover of Whitey Bulger as an FBI informer. Those of us in Boston don’t have such a high regard for Mueller because we remember this story. The government had to pay out tens of millions of dollars because Whitey Bulger, a notorious mass murderer, became a government informer against the mafia . . .

And that’s regarded in Boston of one of the great scandals of modern judicial history. And Mueller was right at the center of it. So, he is not without criticism by people who know him in Boston.

Mueller went from the US Attorney on the Bulger case to the FBI Director where he continued the Boston Mafia cover up.

Perhaps if Robert Mueller, Special Counsel, wants to investigate Russian collusion, he should start with himself.