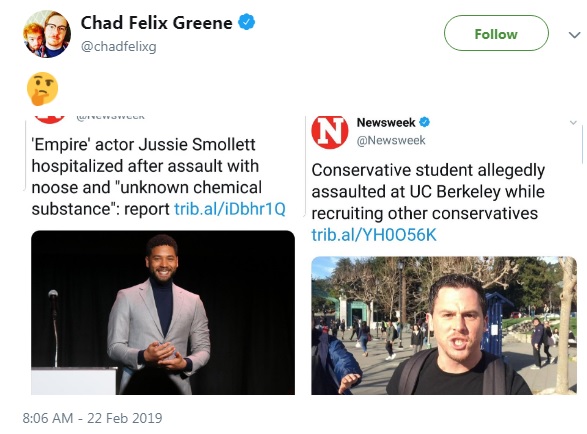 For over three weeks we heard about “modern day lynching,” from our Democrat politicians, while Hollywood celebrities were busy decrying a “racist and homophobic,” attack from two white men against a black, gay actor, Jussie Smollett, who claimed the men then screamed “This is MAGA country.” The media focused on the “attack” with nearly wall-to-wall coverage while pushing the narrative that all MAGA hat wearers, and/or conservative Donald Trump supporters were violent and racist, homophobic thugs.

Then the Chicago police arrested the actor for faking a hate crime and felony misconduct for filing a false police report, as the FBI now investigates the hate hoax letter that the police claim Smollett mailed to himself.

Contrast the never-ending amount of coverage for Smollett, with many media outlets not even bothering to use the word “alleged” when reporting the attack, to the almost non-existent coverage, or the buried coverage, to the conservative that was punched in the face at the University of Berkeley, which was caught on camera.

We’ll use Newsweek as an example since Federalist contributor Chad Felix Greene provides a wonderful side-by-side screen shot of the contrasting headlines:

I mean the fake hate hoax by Jussie Smollett was reported as if it actually happened, (Oh, and he wasn’t hospitalized either!), no “alleged” attack qualifier, despite no video of the attack and the many  red flags even on day one about his story, which ended up being completely fabricated, yet the attack on the conservative student, which was caught on camera, the punch clearly shown as was the attacker cursing at him and calling him names, because he was sitting behind a Turning point USA table  table with a sign that read, “hate crime hoaxes hurt real victims,” a reference to the Jussie Smollett case in Chicago, is called “alleged.”

Here is the video, via Campus Reform:

How much coverage have Americans seen about a recent event where a Hispanic woman that verbally assaulted a man at a Mexican restaurant for wearing a MAGA hat? The man then filmed her, police were called, then as police were escorting the woman out of the restaurant, she then physically hit him over the head again, at which point she was then handcuffed and arrested and charged with assault and battery.

Not much huh? In fact a search for reports being up mostly local news, the Patch (Which has the video), Boston.cbs.local, Necn, Milford Daily news, Telgram.com, and absolutely nothing on page one of search results from those that carried the Smollett hate hoax for nearly three weeks straight, like Washington Post, CNN, New York Times, ABC News, NBC News, etc…..

How much coverage from the mainstream liberal media complex did Americans see about a man charged earlier this week for pulling a gun on a Kentucky couple after he flipped them off because they were wearing MAGA hats, and pulling the weapon after the man confronted him?

Another search shows first page search results from New York Post, The Hill, Buzzfeed, and a few local outlets, but again, nothing from the liberal mainstream media crowd on that first page.

Those were just attacks against white Americans that went uncovered or under-covered in the past week alone, while some in the media are still trying to justify the Smollett coverage and his criminal actions. 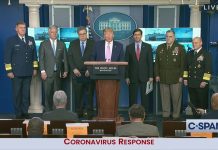