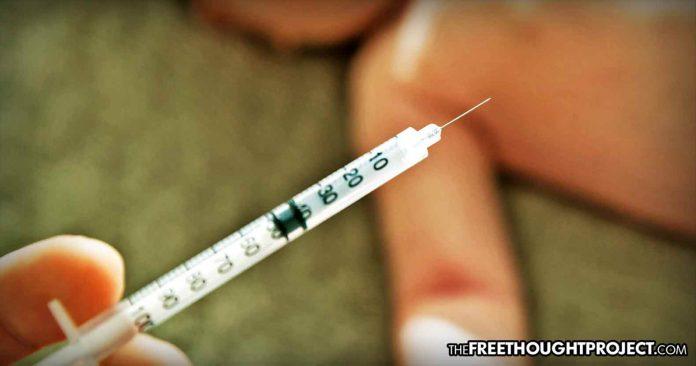 “Anti-vaxxer” and measles outbreak hysteria is sweeping the country and medical tyrants are using it to take away your rights.

Unless you’ve been under a rock for the last month, you’ve likely seen the utter hysteria in the media over the measles outbreaks in the United States. If one were to unquestioningly buy into said hysteria you’d think a deadly epidemic is sweeping the nation and children are dropping dead en masse. But that’s simply not true and the reality is there is no epidemic and no one has died.

Last month, after 36 cases of measles were confirmed in Washington state, the governor declared a state of emergency. This declaration set off a chain reaction of panic and media hype like we’ve never seen. Headlines like “For God’s Sake! Vaccinate Your Children!” and “Measles is on the rise. But telling anti-vaxxers they’re stupid won’t fix it” have run constantly since last month as the media and the government wage a war on those who advocate for vaccine safety and informed consent.

Before going any further, we should inform our readers that here at TFTP we have everyone from attorneys to biologists, to political scientists who write for us. But none of us are doctors, so we do not make recommendations about what you and your family should do in regards to vaccination. On both sides of the vaccine debate exists wild claims and half truths which can muddy the waters when making these decisions about you or your child’s health. It is important to note, however, that everyone deserves the right to make informed decisions on their own personal health and the health of their children.

That being said, if we look past the mass hysteria over the 2019 measles outbreak, we can’t really see a reason for so much fear. So far in 2019, according to the CDC, there have been 127 confirmed cases of measles in the United States.

No one has died from the measles this year. In fact, there has been only a single recorded death from measles in the last decade, which occurred in 2015. It is true that the death rates from measles are about 1 in 1,000, but it takes several years to mount 1,000 cases of measles in this country.

More people die from bee stings in the United States every year than have died from measles in the last two decades.

Despite these facts, government agents and media outlets have spun this year’s measles situation into a nightmarish crisis akin to an apocalyptic dystopian novel.

“Measles is a highly contagious infectious disease that can be fatal in small children,” Washington Gov. Jay Inslee said in his proclamation of a state of emergency last month, adding that these cases create “an extreme public health risk that may quickly spread to other counties.”

While we should expect this reaction from the media as fear is a great way to garner clicks and support their pharmaceutical industry sponsors, the government is reacting in a more insidious manner. Currently, across the country, there are over 100 bills filed in 30 different states proposing to expand, restrict or eliminate vaccine informed consent rights.

Those who promote vaccine safety are being treated as outcasts and lawmakers are literally calling for them to be silenced. Sen. Richard Pan, D-Sacramento, who has sponsored mandatory vaccine laws throughout his career came out this week to threaten the speech of those who question forced vaccination.

In a letter to the Attorney General of the United States, Pan wrote that the “deliberate spread of vaccine information discouraging vaccination” requires the surgeon general to “stop this attack on our nation’s health by addressing the spread of vaccine misinformation.”

These people are not only moving to mandate vaccines, but they are going further by silencing those who speak out against such measures—a chilling notion indeed.

Even if you think that all vaccines are safe and feel that the ever-increasing recommended number of vaccines is totally normal, the idea that the government should forcibly inject citizens should be cause for grave concern.

If government can mandate that children receive vaccines, then why shouldn’t the government mandate that adults receive certain types of vaccines? And if it is the law that individuals must be vaccinated, then why shouldn’t police officers be empowered to physically force resisters to receive a vaccine? If the fear of infections from the unvaccinated justifies mandatory vaccine laws, then why shouldn’t police offices fine or arrest people who don’t wash their hands or cover their noses or mouths when they cough or sneeze in public? Why not force people to eat right and take vitamins in order to lower their risk of contracting an infectious disease? These proposals may seem outlandish, but they are no different in principle from the proposal that government force children to be vaccinated.

Those who advocate for vaccine safety are not the problem. It is entirely normal to question drug manufacturers who have a known history of deceit and corruption. The mental gymnastics some people do to unquestioningly accept the word of vaccine manufacturers like Merck and GlaxosSmithKline who have a massively deadly history is astonishing.

“GlaxoSmithKline admitted to lying about the dangers of Paxil, leading to an epidemic of child suicides,” takes breath. “but if you question the safety of their vaccines, you’re an anti-science fuckwit that needs to fuck off and die!”

Merck has been caught deleting evidence of Gardasil harm and they have been the subject of thousands of lawsuits for their shingles vaccine doing the opposite of what it’s supposed to do.

GlaxoSmithKline has been caught lying about the safety of Paxil, which led to an epidemic of childhood suicides.

GSK used contrived data, known as Study 329, which was conducted and funded by the drug company and published in 2001, to convince the doctors to write scripts. The study made the claim that Paxil is “well tolerated and effective” for kids. Their bolstered claims worked, and in 2002 alone, doctors wrote two million Paxil prescriptions for children and adolescents.

However, a study published in the British Medical Journal this year suggests that not only was Paxil ineffective but it was causing grave side-effects such as self-harm and suicide.