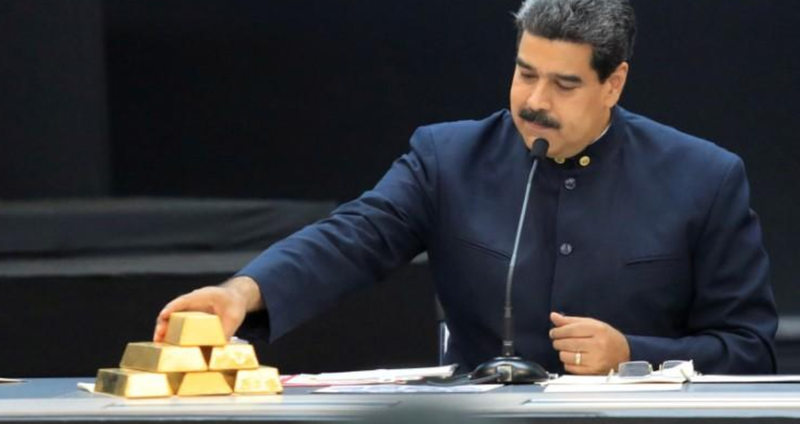 Earlier this week, Vice President Mike Pence declared during a trip to Colombia that “every last dollar” generated by sales of Venezuelan oil, plus all of the country’s assets held abroad, should be turned over to opposition leader Juan Guaido and his shadow government in Caracas, after government-aligned militias killed several protesters, and wounded dozens, during a weekend of violence as they sought to repel US-backed caravans carrying humanitarian aid.

So, with the US tightening the noose of economic sanctions to try and topple Maduro’s regime, which has desperately clung to power despite burgeoning international opposition (though, crucially, Beijing on Tuesday declared that it would oppose a military intervention to depose Maduro), the crumbling socialist Republican’s authoritarian leader has once again looted the Venezuelan central bank to secure badly needed financing for his regime, opposition lawmakers said.

Reuters reported that the regime looted some 8 tons of gold – worth some $330 million at current prices – late last week and sold it to an unknown foreign buyer (suspicion immediately fell on Turkey) in defiance of US sanctions ordered by President Trump in November that prohibit the buying of Venezuelan gold.

The opposition lawmakers who told Reuters about the looting criticized the move as illegal, and warned that Maduro likely intends to illegally sell the gold abroad.

At least 8 tons of gold were removed from the Venezuelan central bank’s vaults last week, an opposition legislator and three government sources told Reuters, in the latest sign of President Nicolas Maduro’s desperation to raise hard currency amid tightening sanctions.
The gold was removed in government vehicles between Wednesday and Friday last week when there were no regular security guards present at the bank, Legislator Angel Alvarado and the three government sources said.

“They plan to sell it abroad illegally,” Alvarado said in an interview. The central bank did not respond to requests for comment. Alvarado and the government sources, who spoke on condition of anonymity, did not say where the central bank was sending the gold. They said the operation took place while central bank head Calixto Ortega was abroad on a trip. In 2018, 23 tons of mined gold were transported from Venezuela to Istanbul by plane, according to sources and Turkish government data.

Since the beginning of Venezuela’s economic crisis (which roughly coincided with Maduro’s election in 2013), the country’s reserves have dwindled. It is also struggling to recover some 31 tons of gold held at the Bank of England, which the UK government has refused to return. 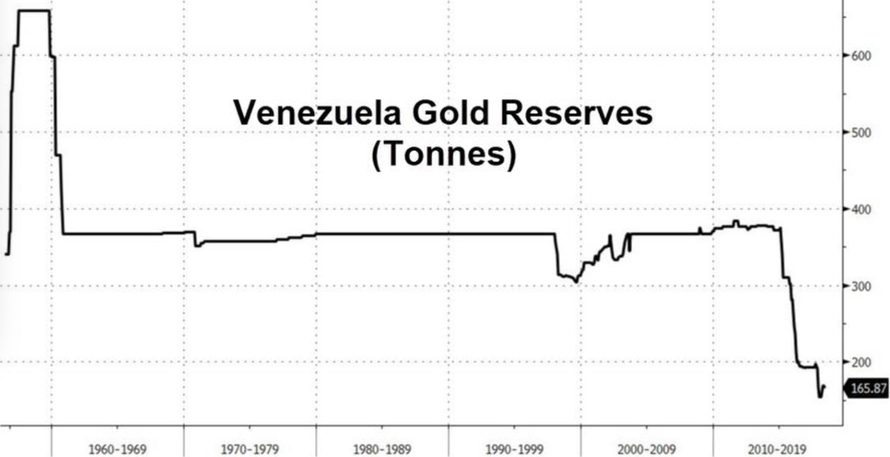 The above chart doesn’t include the most recent sales, which have brought the estimated total in the central bank’s vault down to 132 tons.

This latest sale comes after Maduro scrapped plans to sell 20 tons to Abu Dhabi based investment firm Noor capital in January when the firm balked after being threatened by US Senator Marco Rubio. Some 20 tons of gold were also removed from the central bank’s vaults last year. The US has warned bankers and gold traders to stay away from Venezuelan gold.

The central bank bought part of this gold from primitive gold-mining camps in the south of Venezuela and exported it to Turkey and other countries to finance the purchase of basic food supplies, given widespread shortages, according to more than 30 people with knowledge of the trade.

Some 20 tons of monetary gold were also removed from the central bank’s vaults in 2018, according to the bank’s data, leaving 140 tonnes remaining, the lowest level in 75 years. Abu Dhabi investment firm Noor Capital said on Feb. 1 that it bought 3 tons of gold on Jan. 21 from the Venezuelan central bank and would not buy more until Venezuela’s situation stabilized.

Noor Capital said its purchase was in accordance with “international standards and laws in place” as of that date. Maduro’s government has been seeking to repatriate some 31 tons of gold in the Bank of England’s vaults on fears it could be caught up in international sanctions on the country.