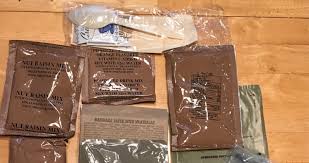 Dear Editor:
I am always interested in the viability of stored supplies, and am amazed at how quickly expiration dates are reached when one becomes a prepper. I’m the fellow that sent in the report of long-frozen yeast some months ago, and recently conducted a taste-test of an MRE purchased in August, 2008. I thought our brother and sister readers may be interested in my findings.
The MRE was packaged by the MRE Star company, out of Hollywood, Florida. It was purchased in a case lot from a Brigade Quartermaster “brick & mortar” store in August, 2008. Though I have no way of knowing the actual manufacture date of the MREs (this simple data point seems to be shrouded in mystery on most all MREs), this store was fairly well respected at the time, and I don’t think they would have sold old merchandise. Though I have no doubt that these MREs were made for the civilian market, they did contain [military contract water-activated chemical]  heaters.

These MREs had been stored at controlled room temperature (in this case 65-75 degree F), in the original case, for the entire duration of storage.
After activating the heater and waiting 15 minutes, the entree contents were warm, but not hot. The heater was hot to the touch, so perhaps if I had let it “cook” longer it would have been warmer. The “Marinara Sauce with Meatballs” entree appeared tomato-red, with good texture and smell. Upon tasting I found that it was quite good! Served over rice or noodles, it would have made a tasty meal. After enjoying about 2/3 of the meatballs, I finally succumbed to my wife’s begging to stop. Since I am writing this 48 hours after ingesting the meatballs, I will assume that they weren’t toxic! I give the entree an unexpected A+.
Unfortunately, the side dishes failed miserably. The nut & raisin mix, dried fruit, and sugar cookies were so rancid that I almost lost my meatballs just sniffing them! I needed no encouragement from my wife to dispose of these products untasted. The orange drink power was a solid block which gave off a strong chemical scent. The coffee packet was fused to the contents, but still smelled like coffee. Neither of these products was tasted.
Based on the results of this taste-test, I opened all of the MREs in the case, disposed of the side dishes, and retained the entrees, heaters, and spoons to go into my “perhaps-better-than-nothing” section. I plan to try one of the vegetarian entrees soon (6 of 12 of the MREs contained vegetarian options).
I summary, I was surprised that the entree, which I had planned to discard, was really the only edible part of the kit! I would love to hear from my fellow readers of their recommendations and experiences in MRE purchase, storage, and testing – as well as any testing that they have conducted on any stored products. Specifics regarding type of product, age, and storage conditions would be very helpful. I can think of few worse nightmares than to finally need our preps, only to discover that they had deteriorated beyond use. Better to find out now than later!!
Best wishes to all, and thanks to you and Jim for all that you do! I would encourage my fellow SurvivalBlog  readers to remember their 10 Cent Challenge donation. It is, indeed, a very small price to pay!  – S.H. in TX