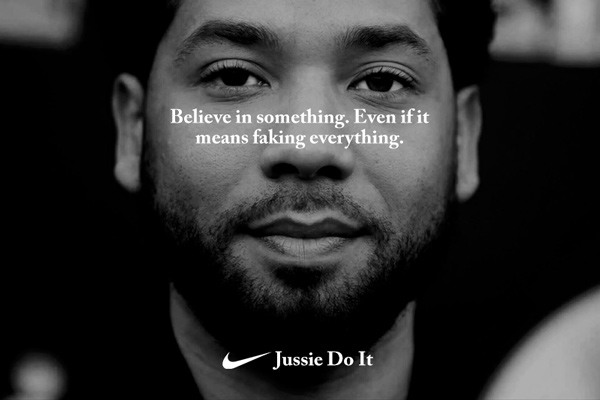 Racism is an abomination and hating someone so badly that you seek to harm them solely on the basis of their skin color cannot ever become tolerable or acceptable.

That is especially true in diverse America. We are told often how our diversity is one of our strengths.

But that said, it should be equally intolerable and unacceptable for anyone to fake a race-related ‘hate crime’ no matter who they are and regardless of their skin color.

“Empire” actor Jussie Smollett may have let his hatred for POTUS Donald Trump get the better of his judgment last month when he — according to charges leveled against him by Chicago police — faked a hate crime.

According to the allegations, Smollett conspired with two Nigerian brothers to make it appear as though the actor was beaten up by Trump-supporting white guys who, during the attack, hurled racial and homophobic epithets at him, poured a bleach-like substance on him, and put a noose around his neck.

None of that is true, apparently.

When Smollett made his complaint, the disgustingly dishonest and irresponsible “mainstream” media (MSM), which is in the tank for the far-Left Democrat Party, built a bandwagon and then leapt on it, declaring how “horrific” a crime it was and lecturing us about the ‘dangers’ of Trump’s ‘politics of hate,’ etc. etc., yada, yada, ad nauseam. Hollywood’s ill-informed Left joined right in.

Now that the incident has been exposed as a hoax — as many of us long suspected — some of the same disgustingly dishonest MSM outlets (CNN and especially that race-baiting hack Don Lemon, we’re looking at you) have continued to blame the president and thus perpetuate the hoax that Smollett created. (Related: Want Jussie Smollett to actually PAY for the investigation into his hate hoax felony? There’s a form for that.)

As reported by Townhall’s Katie Pavlich, Lemon had a near-meltdown after learning that Smollett was in police custody, having surrendered to cops on a charge of felonious disorderly conduct for making a false police report.

“Since the beginning of the Smollett case, Lemon has been one of the actor’s biggest defenders and shamed those who doubted his story,” Pavlich noted.

Well, let’s hope Hannity and Carlson “eat Smollett’s lunch.” Because if they do, they’ll be among the shrinking pool of responsible journalists left like us who have the guts to call out scams and scandal when they see it, regardless of who is responsible.

CNN, in the words conservative commentator, like MSNBC and the networks, are pathetic enablers of people like Smollett who are allowed to weaponize their race and sexual orientation against their political opponents.