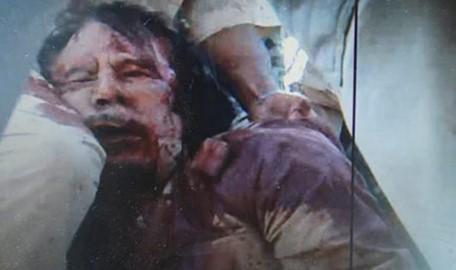 Libya is in a state of anarchic turmoil, with various groups fighting each other for control of the country, and as the Wall Street Journal reported last September, “Islamic State is staging a resurgence in chaotic Libya, claiming more than a dozen attacks in the North African country this year and threatening to disrupt the flow of oil from one of the world’s most significant suppliers.” To such mainstream media outlets as the Wall Street Journalthe fact that oil supplies are being disrupted is much more important than the savage IS attacks that result in slaughter of so many innocent people who are only foreigners, anyway.

The UN Security Council said it deplored the Islamic State’s “heinous and cowardly terrorist attack… in Tripoli on 25 December 2018” and expressed “deepest sympathy and condolences to the families of the victims, as well as to the Libyan people and Government of National Accord, and wished a speedy and full recovery to those who were injured.”

It is laudable that the Security Council should express such sentiments, but if Libya was not “fractured by a six-year civil war”, there would be no need for sympathy from anyone.

The cause of the catastrophe in Libya in Libya was the seven month US-NATO blitzkrieg from March to October 2011 in which thousands of bombs and rockets rained down on that unfortunate land which was governed by President Muammar Ghaddafi whom the West was determined to overthrow by assisting a rebel movement. In Ghaddafi’s Libya, as detailed by the World Health Organisation the government provided “comprehensive health care including promotive, preventive, curative and rehabilitative services to all citizens free of charge through primary health care units, health centres and district hospitals.” Life expectancy was 75 years (as against 66 in India; 71 in Egypt; 59 in South Africa), and the CIA World Factbook noted that there was a literacy rate of 94.2% which was higher than in Malaysia, Mexico and Saudi Arabia.

Ghaddafi was far from being a saint. He dealt with his enemies in the most brutal fashion and was guilty of numerous offences against humanity. But so were (and are) many others like that around the world whose countries are not subject to US sanctions or seven months of strikes by US-NATO planes and missiles.

The US-NATO blitz was successful, and Gaddafi was overthrown and captured by rebel forces, whereupon, as reported, “the increasingly desperate and terrified 69-year-old Gaddafi was thrown on to the front of a white car bonnet, his blood-soaked head locked between the knees of a militiaman… He slipped off the bonnet, his ravaged body unable to cope with the constant battering.” Then, as can be seen in a particularly horrible video, he was beaten mercilessly, sodomised with a bayonet, and murdered.

When she was informed of this, the news caused the United States Secretary of State, Hilary Clinton, to giggle and announce with a laugh that “We came. We saw. He died.”

Trump is the worst president in US history, but at least we have been spared the global ascendancy of a person who cackles with mirth when being told that someone had been murdered.

In any event, Libya was reduced to chaos amid the Clinton cackles, just as is happening in Venezuela at the moment. Its leader, Maduro, is not unlike Gaddafi in many ways, being ruthless and arrogant, and there is no doubt the country has suffered under his regime — but it has suffered a great deal more because of vicious sanctions imposed by Washington, just as happened in Libya.

The United Nations Human Rights Council is not regarded favourably by Washington’s sanctioneers, simply because it points out the negative side of sanctions, in that it is always ordinary people who suffer — and especially the poor, the deprived, the sick, the lame, all those whom Trump says he loves. At a Prayer Breakfast in the White House on 7 February he declared that “America is a nation that believes in redemption” and that religious faith “transforms lives, heals communities and lifts up the forgotten,” which, as with almost everything he says, was a load of hypocritical garbage.

These US sanctions have caused untold suffering. As Al Jazeera reported on 8 February, “a hospital… has said 14 children have died this week following an outbreak of amoebiasis, a form of dysentery transmitted by contaminated food or water. Dozens of other children infected by the disease cannot receive adequate treatment due to a lack of medical supplies.” And on it goes, just as it did in Libya and pre-invasion Iraq which had suffered similarly evil sanctions for so many years.

The UN Secretary-General, Antonio Guterres, has urged everyone involved in the Venezuela crisis to “lower tensions” and begin speaking to each other, but there was no possibility that anyone would listen to him, least of all those intent on the overthrow of Maduro. The UN Special Rapporteur on the negative impact of unilateral coercive measures as affecting human rights, Idriss Jazairy (an admirable and highly intelligent person), stated on 31 January that “coercion” by the US (without naming it) is a “violation of all norms of international law.” He said flatly that “Sanctions which can lead to starvation and medical shortages are not the answer to the crisis in Venezuela… precipitating an economic and humanitarian crisis . . . is not a foundation for the peaceful settlement of disputes.”

But Washington doesn’t want a peaceful settlement of disputes, least of all, at the moment, in Venezuela. It wants to ensure that there is suffering, in order that Maduro can be overthrown by those whom it has deprived of the basic necessities of life. Further, it wants its own man to be at the Top.

A “day of reckoning” is coming – Lin Wood reveals, “the evidence I have is stunning!”

QANTAS AIRLINES: NO JAB NO FLIGHT