Alain Finkielkraut was called “a dirty Zionist shit (a Zionist two times again and “shit” perhaps three times more), a “fascist,” a “racist (two times), and “hateful.” He was asked to leave the demonstration in direct times: “get out of here” (twice), “piss off,” “go back home to Israel!” I can see in all this insults, or defamatory comments, I would even grant a light violence, but I find no trace of a discriminatory motivation. This shows well that the words “anti-Semite” and “anti-Semitic” are used in an absolutely arbitrary manner.

It is true that “Zionist” is often used as a euphemism for “Jew.” But it is also true that many anti-Zionists are happy to befriend genuinely anti-Zionist Jews such as Gilad Atzmon (himself an associate of Soral’s). Finkielkraut was likely attacked for his values rather than his ethnicity.

This subtlety did not prevent the incident from triggering a veritable pro-Semitic moral panic across the entire politico-media class. The media lamented the “anti-Semitic” attack on Finkielkraut and he was comforted by politicians from across the political spectrum, from the far-left to the far-right, including the bulk of prominent nationalist and identitarian figures.

Much of the foreign press (the London Times, The Jerusalem Post, the Jewish Telegraph Agency . . .) misrepresented things further, claiming that Finkielkraut had been called a “dirty Jew.” This is a genuine example of fake news.

Then a Jewish cemetery in the Alsatian village of Quatzenheim was desecrated, with over 90 tombstones being sprayed with with swastikas and anti-Semitic slogans. One tombstone was sprayed with the words: “Elsassisches Schwarzen Wolfe,” meaning “Alsatian Black Wolves,” an Alsatian nationalist group which has been inactive since 1981 . . . Of course, a hate hoax cannot be excluded: one thinks of the recent Jussie Smollett debacle or the Israeli-American who instigated 2000 supposed anti-Semitic bomb and shooter threats over the years.

For those whom anecdotal evidence was not sufficient, the regime also trotted out the usual “statistics” about, seemingly released every year of every decade, showing a massive increase in “anti-Semitic” acts. I will only say that such statistics are dubious in general, repetitive, and obviously ethnically and politically convenient. Grand old man Jean-Marie Le Pen commented:

There is no anti-Semitism in France which would justify a mobilization of public opinion. . . . Incidentally, we’re given a figure of a 74% increase in [anti-Semitic] attacks. Compared to what? I ask that we have the list of all these attacks committed against the Jews, in such a way that we can actually tell the difference between a graffiti, a murder, a telephone call, or a schoolyard scuffle. It is true that radical Islamism is extrapolating in a sense the Israeli-Arab conflict into France. It is much more a matter of anti-Zionism than anti-Semitism. 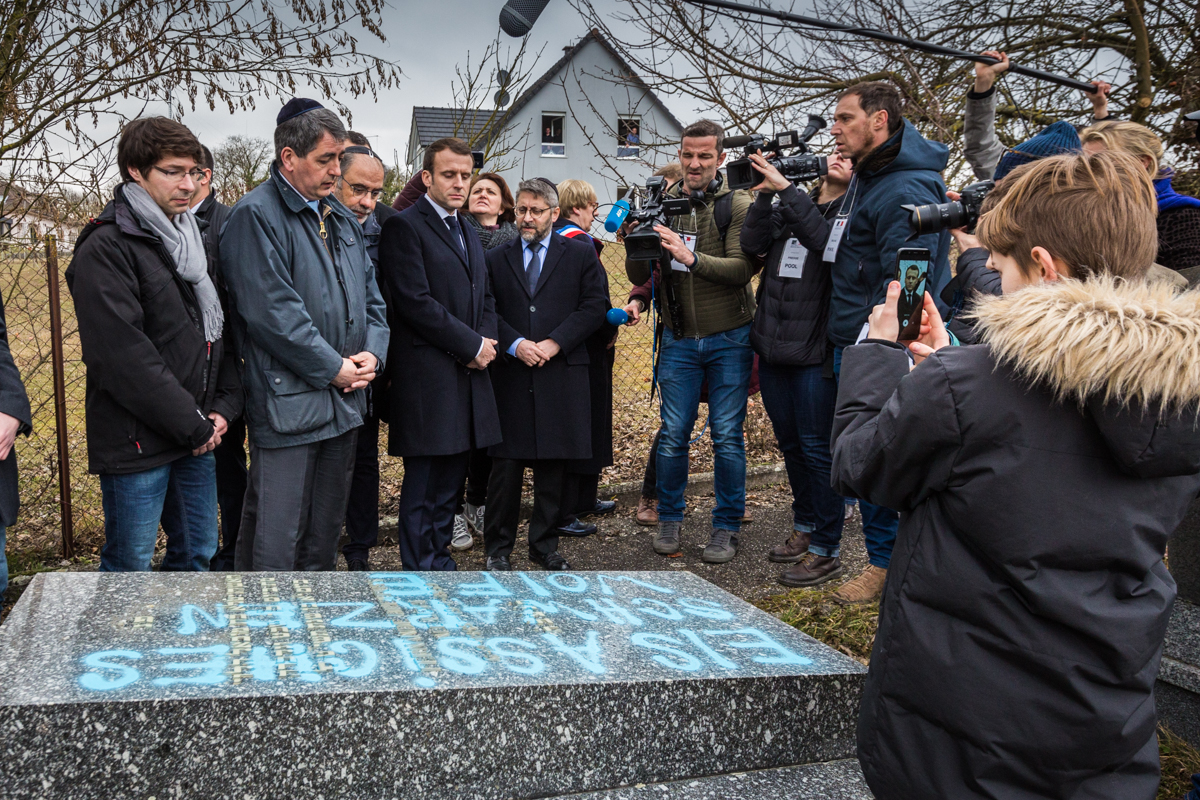 Regardless of whether the Quatzenheim incident is authentic, and it could well be, this event immediately prompted a solemn visit by the President of the Republic himself, Emmanuel Macron. This was followed by a national call to demonstrate against anti-Semitism, initiated by the Socialist Party but with virtually the entire political class following suite.

The response of both of the indigenous French people and the Africans/Muslims was lackluster however. According to the official media, some 20,000 people demonstrated in Paris and negligible amounts in the rest of the country. Actually, as the 20,000 figure was provided by the Socialist Party itself, we can be sure that this is an overstatement.

Serge Klarsfeld, one of the leading lights of the highly-profitable local holocaust industry, could not conceal his disappointment, telling the top journalist Jean-Pierre Elkabbach (a fellow Jew[1]) on television:

This is in stark contrast with the similar 1990 Carpentras Affair, during which a Jewish cemetery was also desecrated. The pro-Semitic demonstrators following this incident numbered over 200,000 in Paris alone. The event was skillfully exploited by the Socialist President François Mitterrand and by the politico-media class in general by abusively linking this event to Jean-Marie Le Pen’s rapidly-rising Front National (FN). This contributed to making the FN unhandshakeworthy and to preventing any alliance between Le Pen’s nationalists and the mainstream conservatives, which would have spelled doom for the Left. It was later shown that the FN had nothing to do with the incident, which had apparently been instigated by a handful of neonazis with no links to the party.

People should generally speculate less about the authenticity of an event (e.g. 9/11, the Reichstag Fire), which is often difficult to prove one way or the other, than on whether the event has been used as a pretext by the ruling elite to do something questionable or disproportionate (often something which it had been hankering to do for a long time), which is typically quite easy to demonstrate.