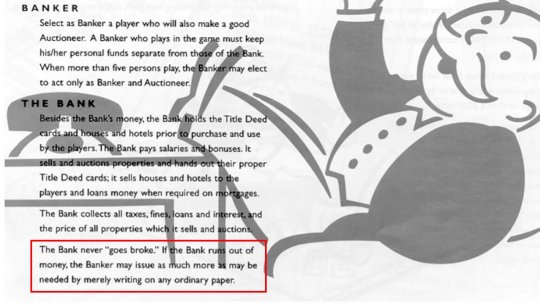 I remember playing Monopoly by the hour with my friends throughout the early 1970s. We loved that game! I recall one rule in the game that we actually had to invoke because our games would get so long:

Just write on a piece of paper! What a great idea! Maybe I just think about this a lot because I have a millennial daughter that really likes the idea of free money. But something does not smell right. Isn’t it interesting that it was JP Morgan’s image used for the banker and monopoly? Decades ago, kids were being taught about Modern Monetary Theory–also known as MMT, and currently the rage among socialists and academics (pardon the redundancy).

I work in a university full of young people. I would estimate that 90% of them will vote Democrat in the next election, and will also be highly motivated to get out and vote. Meanwhile my more conservative generation is retiring and even passing into the night. As the pendulum swings left, this younger generation, a generation that does not understand economics, will be seduced into demanding free money.

In short, Modern Monetary Theory MMT is the mechanism that explains why and how a nation can extend the national debt infinitely. It is a “theory.” And we are acting upon it already. If it is wrong, disaster will follow. If it is right, we can all relax, go back to our pre-prepper lives, and cheer on Socialism in the hope that it will solve society’s problems.

Common sense and a plethora of pundits tell us that you just cannot keep printing money in real life. Yet our youth, and many politicians, don’t see it that way. They don’t read ZH or blogs like this. They are sophisticated, but also immersed in their own world, concerns about careers and activist agendas to make the world a fairer place. They listen to their own teachers, and what academics are teaching about economics these days enables the youth to put their trust in Socialism. A recent presentation by Dr Stephanie Kelton provides a fine example.

IN fact, since she was Bernie Sanders economic adviser the 2016 election, she may be the leading voice on this matter. The heart of her argument is just over 20 minutes long. After watching it the other day, I sat there scratching my head. Could she be right? I was confused. Her thesis is that you CAN just keep printing more money.
Trying to dispel my confusion, I watched it again, and again. Slowly, the truth began to emerge—like watching a magic trick over and over, one begins to notice the skilled sleight of hand of the magician, and the hidden mechanisms that make the trick possible. My university training in rhetorical criticism (bullshit detection) began to kick in.

In what follows we will look more closely at Kelton’s central argument, and show how obfuscation, failure to mention relevant facts, blended with solid facts, and just a dash of sophistry can produce a strong argument promoting socialism that will be ravenously devoured by weaker minds.
I hate it when people lie to my kids!

Kelton begins by pointing out the big question posed by critics whenever we consider new government programs: “How are we going to pay for it?” She believes we can move past this question and get onto to discussing solutions for the future. But a good persuader must refute the arguments against their proposal prior to presenting a new plan.

She has edited a video montage of politicians saying the debt will harm our children & future, followed with images of cartoons & headlines from 1937 to date, bemoaning the debt. We’ve all seen it. No need to panic, she suggest. We just need a paradigm shift to see debt in a different light. We all need “therapy” to get us past this hang-up about spending too much.

She asserts that we are mistaken to understand the USG as a household that cannot continue to spend more than it makes (taxes). Kelton claims that the Federal budget does not work the way a personal budget works—a Federal deficit isn’t the same as when I run up my credit card.This claim is warranted, in her view by distinguishing between currency users and currency issuers—a nice play on words. These sort of linguistic devices always seem to have a ring of truth to them.When I borrow, I am a currency user who borrows from a bank—who is the currency issuer. But the US Government is both the issuer and the user, thus, according to Kelton, “can never go broke, can never have bills coming due that it can’t afford to pay, can’t become insolvent, can’t end up like people you know … forced into bankruptcy.”

Next, she demonstrates the concept by pulling 10 one dollar bills from inside the lectern and saying, “suppose I’m the federal government and I’m going to spend ten of these into the economy. She gives 10 dollars to a volunteer, then immediately takes 4 back as “tax.” She defines the federal deficit as “the government spends more into the economy than it taxes back out.” Thus, in her example, the government has a $6 deficit.
Following this, she claims that the money remaining in the economy is a “surplus” for the economy, which I’ll concede is true—that money pays salaries, hires contractors who build infrastructure, funds Medicare and other socialist programs, but is also handed out to people who won’t work so they can buy fentanyl manufactured in China, mixed with Mexican heroin and smuggled into the country to enrich MS-13 and other such parasitic organizations.

When that money is spent on the wrongs things, taking it out of our economy, even the socialists admit that the economy can get in trouble.

Thus the government borrowed the amount of the deficit. To illustrate the borrowing Kelton “sells” 6 treasury bonds to the volunteer to get back the $6. She then mentions paying interest on the T-bonds—interest that goes the fine gentleman from the audience. Here is where things get more interesting: Kelton defines the 22 trillion on the national debt clock as the “national savings—dollars in the form of treasuries in somebody’s savings account.” I wonder whose?

To wrap it all up, she brought Greenspan out, putting his pic on the screen as he responded to Sen. Paul Ryan in a Congressional hearing, asking how we will pay for all of it: Greenspan “There’s nothing to prevent the federal government from creating as much money as it wants and paying it to somebody.”
So we are back to the key issue: In the case of the US Federal Budget, is the issuer (printer) of the money the same person as the user of the money, as Kelton claims?

As we are aware, the Federal Reserve Bank is not part of the Federal government, but a private a corporation owned by large commercial banks with its USG influence only in the form of the appointment of three of the nine FED governors, who are not beholden to the USG in their policy decisions. Greenspan should have said, “There nothing preventing the FED from creating as much money as it wants, and loaning it to the US government so they can spend it.” All of Kelton’s other claims, supported by charts & graphs, mistake correlation for causation. Her clever wordplay–calling a deficit for one a surplus for another simply distracts us away from the nature of this FED & USG relationship. In fact, she never mentions the Federal Reserve bank, always suggesting that the government prints the money.

Sometimes it is difficult to follow someone’s convoluted argument and point to the key fact where it breaks down. But this time it is clear. The FED and the USG are not the same entity—the “Issuer,” as Kelton assumes and Greenspan states. That is why Kelton never mentions the FED. She employs the misleading quote from Greenspan to make this point. 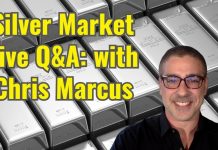