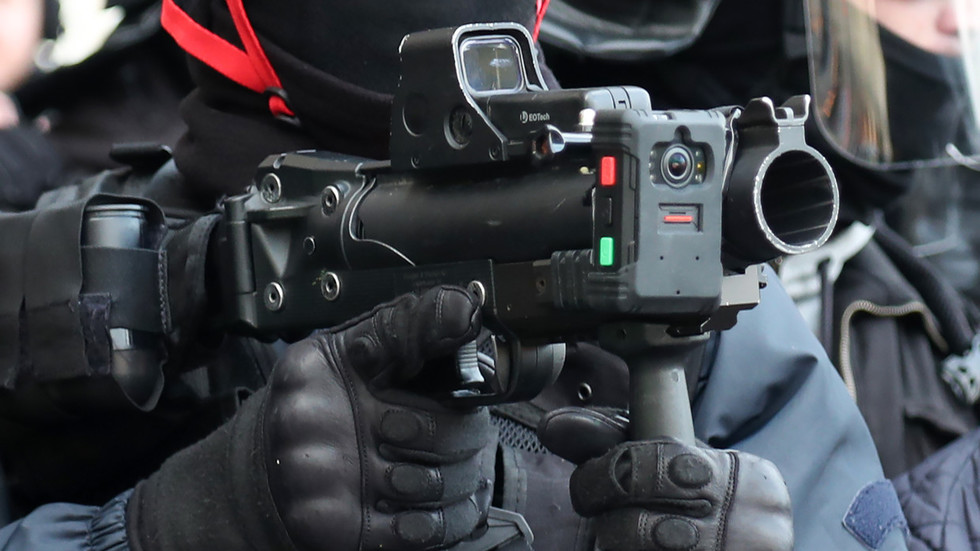 Human rights activists have renewed efforts to ban ‘less-lethal’ guns that riot police use against protesters in France. Known as ‘Flash-Balls,’ they grew to symbolize the weapon of choice in the fight against the yellow vests.

“The lack of sufficient guarantees in the French law undermines the constitutional right of life and the respect for physical safety,” the Human Rights League wrote in an appeal to the Council of State this week. The nonprofit seeks to ban the use of controversial ‘defense ball launchers’ (LBDs), commonly known as ‘Flash-Balls,’ by police against protesters.

The Council, which acts as the nation’s highest administrative court, had earlier dismissed the call to ban the device, saying that LBDs are “necessary” and “particularly appropriate” for tackling violence during rallies. The human rights campaigners, appealing this decision, argue that ‘Flash-Balls’ are dangerous as they often cause serious injuries.

Such weapons are prohibited in riot control in most Western European countries, but French law enforcemers had been equipped with them for decades.

Marketed as ‘less-lethal’ or ‘non-lethal,’ the original Flash-Ball launchers were developed by the French firearms company Verney-Carron. The police got the first batch of 500 LBDs in 1995. They fired ping-pong-sized balls and were intended to counter urban violence. Flash-Ball “delivers punches like Mike Tyson,” its creator, ballistic expert Pierre Richert, said at the time. He noted that the projectiles “hurt but do less damage than a police pistol.”

The current Swiss-made model, LBD 40, was adopted by the French police back in 2009. It shoots 40mm (1.6-inch) rubber or foam slugs at a speed of up to 100 meters per second. It can also launch tear gas and stun grenades.

The ‘less-lethal’ weaponry has been used extensively to quell civil disturbances since the 2000s, most notably during the devastating 2005 Paris suburbs riots. Early on, human rights campaigners and the media had been raising red flags against ‘Flash-Balls’ as evidence mounted that they cause serious injuries. Over the years, several people have been killed after getting hit by projectiles.

In 2010, Mustapha Ziani died of cardiac arrest after an officer shot him in the chest with a Flash-Ball during an altercation at his home in Marseille. Following an outcry, the officer got a six-month suspended sentence for manslaughter.

A 2006 study said that, despite being designed to avoid skin penetration, ‘Flash-Ball’ guns “may still create major trauma with associated severe injuries to internal organs.” The researchers observed two patients hit by the slugs: both required medical treatment, while one was hospitalized for contusions to his heart and lungs.

Similarly, staffers at the Nantes University Hospital who studied Flash-Ball-induced trauma concluded that “the relative low risk of this weapon may be questioned in real life,” as its impact “may produce distant and severe injury.”

Another French study from 2015 examined the case of a healthy 34-year-old man who was shot by a Flash-Ball during a riot. He sustained “serious” skull and brain injuries, which required two months of treatment and rehabilitation. Flash-Ball is “potentially lethal” and dangerous, particularly if shot in the head, the researchers wrote.

The police have used LBDs more than 9,200 times since the Yellow Vest protests began in November. Initially a grassroots movement against planned fuel-tax hikes, the rallies grew to include calls for the resignation of President Emmanuel Macron. They often descended into fierce street battles with police, with multiple injuries on both sides. Recent rallies saw protesters denouncing ‘Flash-Balls,’ which have become the symbol of police brutality.

At least 20 people lost their eyes as a result of LBD fire and grenade shrapnel, according to anti-police brutality group Desarmons-Les! The group documented more than 120 cases of people they say were injured by police using ‘less-lethal’ weapons, mostly LBD 40s and GLI-F4 instant tear-gas grenades. The latter, despite its label, packs 25g of TNT and can inflict truly horrific injuries, especially if picked up by a protester before detonating. Many victims sustained facial injuries, like broken noses and cheekbone fractures, after being reportedly hit by projectiles.

One of the ‘faces’ of police brutality during the Yellow Vest protests is 20-year-old Fiorina L. The young woman lost the sight in her left eye from a gas-grenade explosion on Avenue des Champs-Elysees in December.