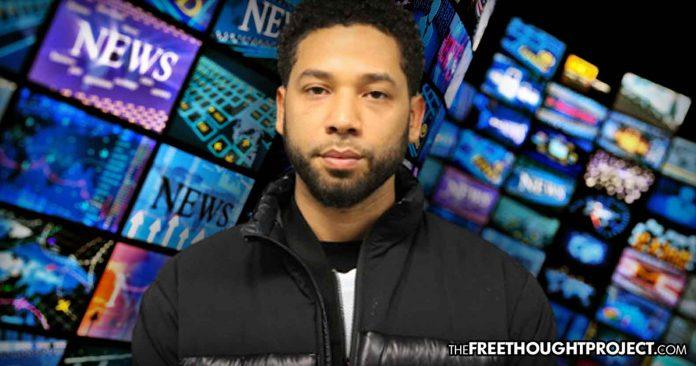 Last month, Jussie Smollett, who plays Jamal Lyon on the Fox show Empire, said two people approached him at about 2 a.m. on a Tuesday as he was walking to get something to eat and got his attention by yelling racial and homophobic slurs—specifically “this is MAGA country.” He claimed these people then hit him, poured an unknown chemical substance on him and wrapped a rope around his neck before they fled.

The nation was outraged, and rightfully so, that such a terrible crime inspired by hatred would take place on the streets of America. Presidential hopeful for 2020, Kamala Harris weighed in and compared the attack to a modern day lynching.

.@JussieSmollett is one of the kindest, most gentle human beings I know. I’m praying for his quick recovery.

This was an attempted modern day lynching. No one should have to fear for their life because of their sexuality or color of their skin. We must confront this hate.

Coincidentally, after the attack, an anti-lynching bill moved through the Senate, which, after failing multiple times before, passed unanimously this time.

But Smollett’s story was apparently all lies. On Thursday, according to reports, Chicago police laid out their case against Smollett Thursday morning, accusing the TV star of orchestrating an elaborate hoax via two “bogus” hate crimes — one employing an alleged attack, and one involving a threatening letter — all in order to secure a pay raise.

The arrest even prompted a response by the president himself.

.@JussieSmollett – what about MAGA and the tens of millions of people you insulted with your racist and dangerous comments!? #MAGA

If this was indeed a hoax, the damage Smollett did to the past and future victims of actual crimes is potentially irreparable. Now, every time a person claims they were raped or attacked, they’ll be lumped in with Smollett by half the country and real crimes may go unpunished as a result. We have already seen the comments on those posting videos of police brutality online being called “Smollets.” Shameful indeed.

Now that this story has come out as a hoax, it is receiving round the clock coverage from mainstream media. The divisive nature of this incident has the left inflamed and the right just as mad which is the mainstream media’s wet dream.

Police are claiming that Jussie Smollett staged his own attack as part of a “publicity stunt” to promote his career. …So the fact that the media has spent days reporting on and speculating about every detail of the alleged attack serves as a reminder that the plan worked.

Indeed, it has. While the media continues to focus on what is essentially a non-story meant to provoke hatred between groups of people, some very important issues have been unfolding which have received little to no coverage in the mainstream press.