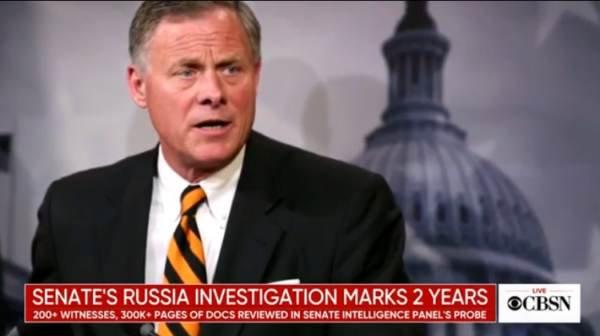 After two years of investigating, Senate Intel Chairman Richard Burr (R-NC) told CBS on Thursday that “based on evidence” his committee has seen there is nothing to suggest Trump’s campaign colluded with the Russians during the 2016 election.

It’s about time, you dunce.

“We’ll be judged at the end of this on the product that we produce,” Burr said. “We’ll also be judged on the process that we chose … None of us ever anticipated that this would be two years.”

Senator Burr said, “If we write a report based upon the facts that we have, then we don’t have anything that would suggest there was collusion by the Trump campaign and Russia.”

“If I can finish tomorrow, I would finish tomorrow,” Burr said, adding, “We know we’re getting to the bottom of the barrel because there’re not new questions that we’re searching for answers to.”

The Senate Select Committee has been coordinating with Robert Mueller’s team and their previous interview with Michael Cohen led to his indictment and prison time.

The Senate Intel Panel has interviewed over 200 witnesses and poured over hundreds of thousands of documents as part of their investigation into whether Trump’s camp colluded with Russia — the investigation started over two years ago in January of 2017.

The House Intel Panel also began a parallel ‘Trump-Russia’ probe at the same time but concluded in April of 2018 that they found zero evidence of collusion.

Mark Warner, the Democrat working along side of Senator Burr as Vice Chairman of the Senate Intel Panel has made numerous media appearances over the last two years complaining about Russian Twitter trolls and vaguely suggesting there are new developments in his committee’s Russia probe as evidence Trump may have conspired with Russia.

Although Senate Intel Chairman Burr doesn’t speak to the media too often, he publicly stated over the summer his committee still had found no evidence of Russian collusion and reiterated that statement once again in the Fall.

Trump has had it with endless investigations into his campaign, inauguration, finances and personal life and unleashed on his Twitter account Thursday, calling it “presidential harassment.”

PRESIDENTIAL HARASSMENT! It should never be allowed to happen again!