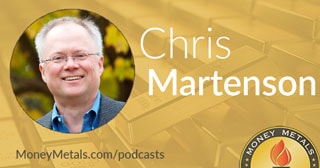 Coming up Chris Martenson of PeakProsperity.com and famous author of The Crash Crouse and his latest book Prosper! joins me to dissect what’s behind the Yellow Vest movement in France and why the mainstream media and those in power simply don’t want you to know what’s really going on there. Chris also tells us which precious metal he most favors right now. Don’t miss another wonderful interview with the great Chris Martenson, coming up after this week’s market update.

In a recent speech, Federal Reserve chairman Jerome Powell told some real whoppers. We’ll address his misrepresentations head on, in just a bit.

But first, let’s review this week’s market action. Despite drama in Washington over averting a government shutdown and prompting President Donald Trump to declare a national emergency on the border, nothing too dramatic is happening in the gold market.

Prices are trading in a tight range, coming in essentially unchanged from last Friday’s close. Gold currently trades at $1,316 per ounce.

Turning to the white metals, silver is posting a 1.3% decline on the week to trade at $15.66 an ounce. Platinum is off 1.0% to check in at $797. And finally, palladium pushed up to a new record high close on Thursday and is continuing higher this morning… posting a weekly gain so far of 1.8% to trade at $1,436 per ounce as of this Friday morning recording.

Mining industry analysts know that palladium is in a chronic supply deficit that could last for years. The world’s biggest supplier of palladium is South Africa. That country is also a major producer of platinum and gold.

The South African mining industry has suffered a dramatic contraction over the past year. Statistics South Africa reported on Thursday that gold produced by South African mines has declined for 15 straight months. In December, gold output plummeted a whopping 31% from 2017.

But mining companies aren’t investing in new projects in South Africa in part due to increasing hostility from the government. The ruling African National Congress has vowed to expropriate white-owned farms without compensation, a move that puts all property rights there in potential jeopardy. Militant Marxist insurgents are vowing to seize businesses and vacation homes.

Deteriorating infrastructure, rolling power blackouts, and labor disputes are also contributing to the shuttering of mines.

Unless the South African government changes course from its socialist path and restores investor confidence, the mining industry there will likely continue its decline.

Elsewhere in the world, the mining industry is struggling to find and develop economical new reserves. Global gold production could actually go into decline on a worldwide basis this year.

In other words, we may have seen peak gold – a peak in the total number of ounces pulled out of the ground by miners over the course of a year. At least for the foreseeable future, it appears the mining industry lacks the capacity to ramp up production in order to meet rising global demand.

One of the leading proponents of the peak gold thesis is Ian Telfer, chairman of Goldcorp – now part of Newmont Mining. Telfer called for peak gold in 2018 and expects global gold output to go down from here. If he’s right, it will be hugely bullish development for prices.

Well now, as promised, we’re going to expose some of the lies and deceptions of Jerome Powell. Here is the Fed chairman in his own words, speaking last week in front of a group of educators.

Jerome Powell: If I could say one overarching thing that is really my job, and all of our jobs here, it is to try to earn and deserve the trust of the American people for our institution, that we’re here working on their behalf in a non-political way to support the economy and use our tools to achieve maximum employment and stable prices. That’s really the essence of this job and that involves transparency, it involves doing our job as best we can, explaining ourselves clearly. It’s a world where surveys show that all over the world, people are losing faith in large institutions, so we’re paddling against the current in trying to sustain public faith in the Fed.

No doubt, Powell is genuinely concerned about maintaining “public faith in the Fed.” But he doesn’t want the public to know the truth about the Fed.

First of all, the Fed doesn’t work on behalf of the public per se. It works for the member banks that formally own it and that depend directly on it.

Next, contrary to Powell’s claims, the Fed is quite political. It derives its legitimacy from an original act of Congress. Federal Reserve Board policymakers are appointed through a political process, then subjected to political pressure over their interest rate decisions. Powell can claim he isn’t influenced by political pressure, but he certainly aims to exert the Fed’s influence in our political system.

The Fed actively lobbies Congress to protect its special privileges and thwart legislation it opposes such as the Federal Reserve Transparency Act. It’s quite something to listen to Powell claim the Fed practices “transparency” when in reality it seeks to safeguard its secrecy.

Powell talked about using his “tools to achieve maximum employment and stable prices” – as if American workers have the Fed’s magic powers to thank for their jobs rather than job creators.

Regarding “stable prices,” Powell has a strange definition of “stable.” The U.S. dollar has lost close to 98% of its purchasing power since the Federal Reserve was established in 1913. Moreover, it is official Fed policy to promote annual currency depreciation and prevent the dollar from maintaining a constant, stable value.

Finally, when Powell said part of the Fed’s job was “explaining ourselves clearly” – well, that was clearly untrue. Former Fed chairman Alan Greenspan has admitted that “Fedspeak” entails deliberate obfuscation.

“Fedspeak” is meant to give the public the impression that Fed officials have special knowledge and wisdom. In reality, they are just following the same economic indicators as everyone else and don’t even have the ability to anticipate major turns in the economy. 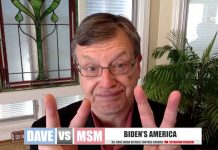