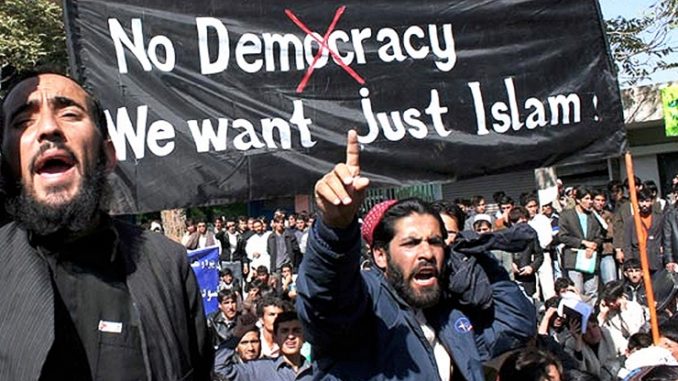 During past periods of mass immigration to the United States, native-born Americans often warned of dire consequences to our culture, traditions, and founding. They worried that too many immigrants would ‘water down’ American mores, values, and customs.

For the first 100 or so years of our existence, Congress did not place many restrictions on immigration. In those years, scores of migrants from Germany, Ireland, and even China streamed to America, VOA News reported.

Eventually, Congress placed restrictions on immigration and from about 1920 or so until the mid-1960s, America absorbed the wave of migrants who had mostly come from the “Old World” and they assimilated.

In recent years, however, migrants have increasingly come from other parts of the world where Islam is practiced. And, warns one Egyptian woman, they are bringing with them a culture, a religion, and values that so conflict with Western mores and traditions observed in the United States that she fears a major upheaval is coming.

Writing under the pseudonym “Magda Borham,” she penned a letter recently to the U.S. and the West in general with a dire warning about an Islamic invasion under the guise of “immigration.”

“Nobody else in the world knows Islam and the mentality of Muslims more than those who have suffered by having Islam as part of their life,” Borham — who says she’s lived in Egypt for more than three decades — wrote.

“If you listen to the [Christian] Copts of Egypt, the Christians of Syria, Iraq, Sudan, Pakistan, and all the other Muslim countries, you will hear descriptions of the horrors of Islam,” Borham continued. “See and feel the tears of the minorities in every Islamic society. These tears will tell you the true stories of Islam. Hear the blood of the ex-Muslims pounding. It’s their blood that is shouting out every single second, asking the rest of the world to ‘Wake up!’” (Related: Facebook sides with radical Islam, bans gay magazine.)

Borham goes on to to say that most Americans don’t understand that Islam isn’t a religion so much as it’s an authoritarian political construct that does not comport with the individual liberties and freedoms recognized and protected by the U.S. Constitution. Indeed, she says, Islam is America’s biggest danger.

The Left as ‘useful idiots’ to radical Islam

She notes that as Egypt has transformed into an Islamic country, religious minorities like her have increasingly suffered.