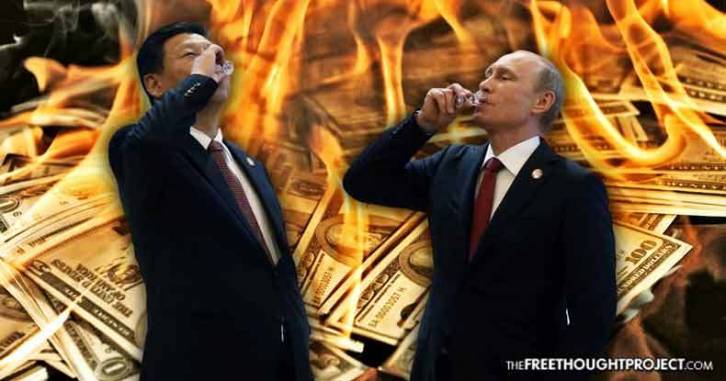 The fragility of state finances

In my last Goldmoney article I explained why the monetary policies of inflationist economists and policy makers would end up destroying fiat currencies. The destruction will come from ordinary people, who are forced by law to use the state’s money for settling their day-to-day transactions. Ordinary people, each one a trinity of production, consumption and saving, will eventually wake up to the fraud of monetary inflation and discard their government’s medium of exchange as intrinsically worthless.

They always have, eventually. This has been proved by experience and should be uncontroversial. For the issuer of a currency, the risk of this happening heightens when credit markets become destabilised and confidence in the full faith and credit, which is the only backing a fiat currency has, begins to be questioned either by its users or foreigners or both. And when it does, a currency starts to rapidly lose purchasing power and the whole interest rate structure moves higher.

The state’s finances are then ruined, because by that time the state will have accumulated a lethal combination of existing unrepayable debt and escalating welfare liabilities. Today, most governments, including the US, are already ensnared in this debt trap, only the public has yet to realise the consequences and the planners are not about to tell them. The difficulty for nearly all governments is the deterioration in their finances will eventually wipe out their currencies unless a solution is found.

There is a solution that if taken allows the state to survive. It could be modelled on Steve Hanke’s (of John Hopkins University) preferred solution of a currency board, that when strictly observed removes the state’s ability to create money out of thin air. He recommends this solution to currency debasement and the evils that come with it for Venezuela and the like, linking a distressed emerging market currency to the dollar. But here we are considering stabilising the dollar itself and all the other currencies linked to it. The currency board in this case can only be linked to gold, which has always been the peoples’ money, free of issuer risk. In former times this was the basis of a gold exchange standard.

Professor Hanke’s currency board is a rule-based system designed to achieve the same thing. Once the system is in place, every currency unit subsequently put into public circulation by the monetary authority must be physically backed by a defined weight of gold bullion. This was the method of the gold exchange standard adopted by the Bank of England under the terms of the Bank Charter Act of 1844. A modern currency board, consisting of digitised currency, effectively works the same way.

A currency board system is not the best mechanism whereby currency is made exchangeable for gold. Its weakness is it relies on the state fulfilling its obligations, so it would be better to use gold directly, either in physical or digitised form. America reneged on its gold exchange standard in 1933/34, when it first banned gold ownership and then devalued the dollar. That was simply theft by the state from its citizens. Therefore, other safeguards for a gold exchange standard must be in place.

A return to a credible gold exchange standard will then put a cap on interest rates and therefore government borrowing costs. Instead of nominal rates of 10% going on 20% and beyond, a gold exchange standard will probably cap long-term government borrowing rates in a two to five per cent range. It also allows businesses with viable investment plans to progress as well. Not only is it an obvious solution, but it is similar to that adopted in the UK following the Napoleonic wars.

Britain had government debt levels in 1815 greater than that of all advanced nations today relative to the size of her economy, with the single exception of Japan. She introduced the gold sovereign coin in 1816, comprised of 0.2354 ounces of gold, as circulating money with a face value of one pound. Over the following nine decades, not only did she pay down her government debt from over 200% of GDP to about 30%, but her economy became the most advanced and wealthy in the world. This was achieved with sound money, whose purchasing power rose significantly over those nine decades, while the quality of life for everyone improved. A sovereign was still one pound, only it bought much more.

Ordinary people were encouraged to work, spend and save. They aspired to make their families better off. The vast majority succeeded, and for those few unfortunates who fell by the wayside, charitable institutions were set up by successful philanthropists to provide both housing and employment. It was never the function of the state to support them. It would be too much to claim that it was a perfect world, or indeed that everyone behaved as gentlefolk with the best of Victorian values, but the difference between the successful laissez-faire economy in Britain with its relatively minor faults compared with the bureaucratic socialism that succeeded it is stark.

The key is in the creation and preservation of personal wealth, contrasting with socialist redistribution and wealth destruction, which has steadily undermined formerly successful economies. The future is coalescing towards an inflationary collapse for all Western governments, the manner of which is described in more detail in the following section. For prescient politicians, it creates the opportunity to reverse out of socialism, because the silent majority, which just wants commercial stability in preference to state handouts, if properly led will support a move away from destructive socialism. It is not a simple task, because all advice that a politician receives today is predicated on the creed of inflationism and socialist imperatives.

Why and how an inflationary collapse occurs

Monetarists are fully aware that if a government increases the quantity of money in circulation, its purchasing power declines. Their theory is based on the days when gold was money and describes the effect of imports and exports of monetary gold on the general price level.

Pure monetarists appear to assume the same is basically true of fiat currencies, unbacked by gold. But there is a fundamental difference. When gold is used as money for settling cross-border trade, an arbitrage takes place, correcting price differentials. When prices are generally low in one country, that country would achieve sales of commodities and goods in other countries where prices were higher. Gold then flows to the lower price centre, raising its prices towards those of other countries. With unbacked national currencies, this does not happen.

Instead, national currencies earned through cross-border trade are usually sold in the foreign exchanges, and the determinant of trade flows is no longer an arbitrage based on a common form of money. The pure link between money and trade has gone, and whether foreigners retain or sell currency earned by exports depends mostly on their confidence in it. That is a matter for speculation, not trade.

Domestic users of state-issued currency are divorced from these issues, because foreign currencies do not circulate domestically as a medium of exchange. Instead of being a form of money accepted beyond national boundaries, as gold was formerly, there is no value anchor for domestic use. For this reason, a national currency’s purchasing power becomes a matter of trust, and it is that trust that risks being undermined in a credit crisis. The less trustworthy a government, the more rapidly a currency is in risk of decline.