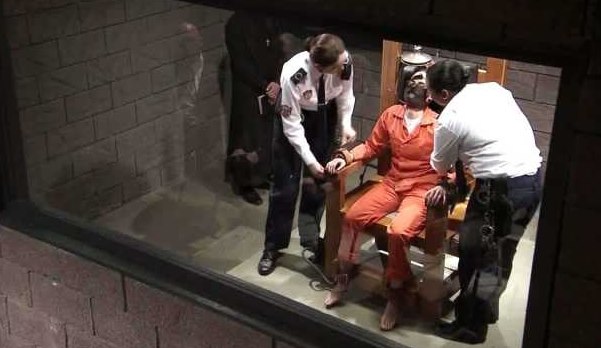 When criminals hit death row, they’re waiting for the day of their execution, when they will be exterminated for their crimes, and often a small crowd watches from an observatory. If you’re a newborn baby in New York, and your mommy decides you just might be a burden to her one day, it’s now legal for the doctor to exterminate you, and if that’s not sick and demented enough, there is no ruling on what style execution can be utilized in front of the small crowd that helped deliver the new breathing, thinking, feeling human being with a soul, into this world.

So what will it be? Will the doctor slit the throat of the newborn with a fresh scalpel blade, or sever the spinal cord with a machete? Maybe put the infant in a rear-naked-choke hold, like they use in mixed martial arts (MMA), until no more oxygen or blood can reach the brain. How about using a lethal injection, maybe 500 parts per million of mercury – that should do the trick, huh? (That’s the same as 10 flu shots at once, by the way).

Or, some liberal engineers could build a tiny electric chair, strap the baby down at the wrists, waist, and ankles, attach some electrodes to his/her head, and juice up the newborn with a couple thousand volts that stop the heart and induce permanent unconsciousness. Maybe the new KKK (leading Democrats) will want to hang the newborn human babies, like they did non-subservient blacks not too long ago.

It would all be, as Hitler once said, “for the greater good,” right? Think of how much that baby would cost the economy over the years, until it gets a job in some factory, boxing crackers or putting handles on car doors. Plus, it’s tough for moms to work after they have a baby, so the Democrats, after all, are just trying to rebuild the economy by implementing day-of-birth executions.

Maybe the lead Democrat politicians a.k.a. “Death Cult” can host a pay-per-view event and celebrate, like they did when they signed the bill, then use the funds for PAC ads

Since there will already be a small crowd standing around the “loving mother” when she has her baby and it’s executed like a sick pig, and since nobody is paying to witness that baby-death-row execution, except for the parents, maybe it would be beneficial to the hurting economy to broadcast it all live for the violent population to cheer on, via pay-per-view.

Heck, MMA fights sell for about $65 now, so imagine if 2,000,000 Americans bought in to the new “Population Control Event” and sat around at the bars eating chicken wings, drinking beer, and cheering along. What’s next, executing all senior citizens and kids with autism because they’re a “burden” on the economy?

Since the evil, racist organization Planned Parenthood has already executed 8,000,000 babies, the money to be made off baby-death-row executions is unfathomable. Move over Big Pharma! Surely, Bill Gates, Jeff Bezos, the Clintons, OAC, Kamala Harris, Cory Booker, Elizabeth Warren, and the rest of the insane socialist-globalist-communists are “all in” for it.

It’s easy math. Just multiply another 8 million by $65 by 2,000,000 viewers and the gross revenue might just pay for the trains-across-the-oceans that are literally part of the “Green New Deal.”

There is not one single Democrat right now who is speaking out against the outright murder of newborn babies. Not one. No politicians, no citizens, no media pundits, not even the late show comedians. This is no joke to them. You either believe babies have thoughts, feelings, and a soul, or you don’t.

The DEATH CULT loves killing babies, and will also celebrate the murder of any Trump supporter, especially if broadcast for public viewing pleasure

Since the Roman coliseums, violence and outright murder have been a major source of entertainment. Today, poachers hunt and kill innocent animals all over the world, even ones that are nearly extinct, with total apathy and indifference. Death-Cult-Democrats feel the same way about babies and Republicans. If they could start hunting right now, legally, they would. Anyone in a MAGA hat would be the first to be executed, including teens and children.

The mass media has at least 100 million Americans believing that President Trump is a white supremacist, Nazi-style dictator who hates blacks, immigrants, and women, when it’s just the opposite. Socialism is nothing more than Communism in sheep’s clothing.