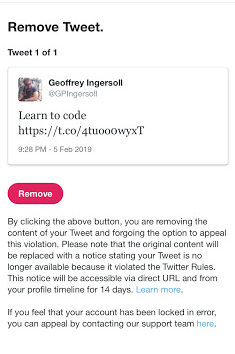 The Daily Caller Editor in Chief Geoffrey Ingersoll was locked out of his Twitter account Tuesday night after tweeting “learn to code” at The Daily Show.

The Daily Show’s Twitter account made a video game-related joke about President Donald Trump’s State of the Union Address, ribbing that the president unlocked the “asymmetrical background” achievement by getting Vice President Mike Pence to stand but House Speaker Nancy Pelosi to remain seated.

The Caller editor received notification from Twitter shortly thereafter indicating that he would have to delete the tweet or remain locked out of his account. Ingersoll’s tweet allegedly “violated the Twitter rules,” according to a review, but Twitter did not say which specific rule or rules had been violated. (RELATED: Two Conservatives Suspended From Twitter — One For Tweeting About Brussels Sprouts)

According to an official page detailing Twitter’s enforcement options, Twitter will force users to delete tweets when they encounter an “otherwise healthy account that made a mistake and violated our Rules.”

When we determine that a Tweet violated the Twitter Rules, we require the violator to remove it before they can Tweet again. We send an email notification to the violator identifying the Tweet(s) in violation and which policies have been violated. They will then need to go through the process of removing the violating Tweet or appealing our review if they believe we made an error.

Rather than delete the tweet, Ingersoll opted to issue an appeal shortly after midnight.

Approximately two hours after an inquiry from the Caller on Wednesday morning, Twitter sent an email to Ingersoll apologizing and indicating that they had made an “error” by removing access to his account.

The “learn to code” meme gained popularity after BuzzFeed and the Huffington Post announced they would be laying off a significant number of reporters and other media staffers. The three-word phrase became a way to remind left-leaning journalists how many of them had responded to coal miners losing their jobs several years prior.