After an investigation conducted by the Covington Diocese turned up no evidence that 16-year-old high school student Nicholas Sandmann confronted Native American activist Nathan Phillips during a March for Life rally at the Lincoln Memorial last month, seemingly confirming that the mainstream press was incorrect to pillory the white, MAGA-hat wearing teen for a confrontation that never actually happened, lawyers for Sandmann filed the first of what are expected to be many defamation lawsuits demanding compensatory and punitive damages for leading an Internet mob that villified Sandmann and his peers.

According to Reuters, lawyers Lin Wood and Todd McMurtry are seeking $250 million in damages from the Washington Post on behalf of Sandmann, a sum equal to the amount that billionaire Jeff Bezos paid to buy the paper in 2013.

The suit claims that the paper – which helped publicize a now infamous photo that helped trigger an Internet mob that swiftly outed the teen and demanded he be punished – led the hate campaign against Sandmann – and failed to practice proper journalistic due diligence – “because he was the white, Catholic student wearing a red ‘Make America Great Again’ souvenir cap on a school field trip to the January 18 March for Life in Washington, D.C. when he was unexpectedly and suddenly confronted by Nathan Phillips (‘Phillips’), a known Native American activist, who beat a drum and sang loudly within inches of his face (‘the January 18 incident’).” 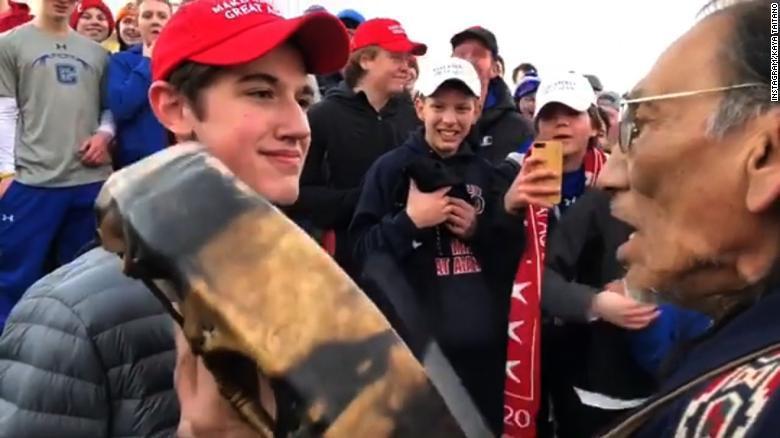 Not only did the diocese’s investigation corroborate the students’ version of events, but it also found no evidence to support Phillips’ claims that Sandmann and his fellow students had been chanting “build the wall” at the time of the confrontation. What really happened – as is now widely known – is that the students, who were marching with the pro-life rally, were verbally accosted by the Black Hebrew Israelites, who hurled homophobic slurs at the students and accosted them.

“In targeting and bullying Nicholas by falsely accusing him of instigating the January 18 incident, the Post conveyed that Nicholas engaged in acts of racism by “swarming” Phillips, “blocking” his exit away from the students, and otherwise engaging in racist misconduct,” the suit read. “The Post ignored basic journalist standards because it wanted to advance its well-known and easily documented, biased agenda against President Donald J. Trump (“the President”) by impugning individuals perceived to be supporters of the President.”

The Washington Post’s Vice President for Communications Kristine Coratti Kelly told Reuters “We are reviewing a copy of the lawsuit and we plan to mount a vigorous defense.”

“In a span of three (3) days in January of this year commencing on January 19, the Washington Post engaged in a modern-day form of McCarthyism to claim leadership of a mainstream & social media mob of bullies which attacked, vilified & threatened Nick Sandmann, an innocent minor,” attorney Lin Wood said.

He continued: “The Post published to third parties without privilege no less than six false and defamatory articles of and concerning Nicholas, including two in its print newspaper and four online.”

According to the Daily Wire, Sandmann’s lawyers sent “letters for potential lawsuits to over 50 entities ranging from Democratic politicians to celebrities to media figures.”