When people talk about the 51st state, they’re usually pondering somewhere like Puerto Rico or Guam becoming full states. After all, that’s always been where we were most likely to see a 51st state come from, right?

You see, there’s a growing push to create a 51st state by carving Washington state into two separate entities, and it’s motivated in part by gun control legislation such as I-1639.

Striding back and forth across the marbled Rotunda with the flag of the proposed state of Liberty behind him, Rep. Matt Shea drew a connection between supporting gun rights and splitting Washington at the crest of the Cascade Mountains.

Despite all the talk he’s heard about “One Washington” around the Capitol, Eastern Washington and liberal downtown Seattle are very different, the Spokane Valley Republican said. Residents of the latter might support more government regulations, higher taxes and gun control; residents of the former don’t, he said.

About 50 people gathered in chairs and on the steps around him cheered and clapped.

“We’re not going to live in a state that takes away our firearms,” he said, to more cheers. “The only solution left is a 51st state.”

To those in Western Washington who point out that Eastern Washington gets more back in taxes than it pays into the state coffers, Shea said future 51st staters should just reply, “We don’t want to be a burden any longer. Let us go.”

As in recent years, Shea has introduced a resolution in the House to ask Congress to split Washington and create the new state of Liberty out of the eastern part. It’s a concept that Shea said is growing in popularity in eastern counties, and he’s getting flooded with emails.

While Washington isn’t like some states where it’s dominated by a single city, such as New York, it is dominated by a western portion that shares much of its politics with the rest of the West Coast.

It’s not difficult for people in the eastern part of the state to believe they’re being bullied by urban elites who are convinced they know better than their neobarbarian neighbors to the east.

It’s also not hard to see why those people would want to divorce themselves from those elites.

I’ll be honest, I haven’t looked too hard into the likelihood of something like this happening, much less spoken with my friends in Washington. Since most of them tend to live in the western portion of the state–yes, they’re in occupied territory–it’s unlikely to impact them except to potentially make them more of an anomaly in their state.

That said, it’s an interesting proposal and could create some interesting political ramifications, especially when it comes to guns. Urban centers are often convinced they have the right of it when it comes to gun control, while the more rural parts of the state recognize that guns are valuable tools for hunting and self-defense. Creating new states from those rural centers offers unique possibilities for countering the anti-gun insanity we see from those urban centers.

But that doesn’t mean it will happen.

I’ll be very surprised to see anything like this pass, especially in a Congress who won’t do anything to empower pro-gun activists due to a vehemently anti-gun House of Representatives. 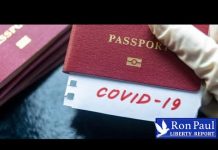 Covid 19 Vaccines: Paving The Way For The Surveillance State