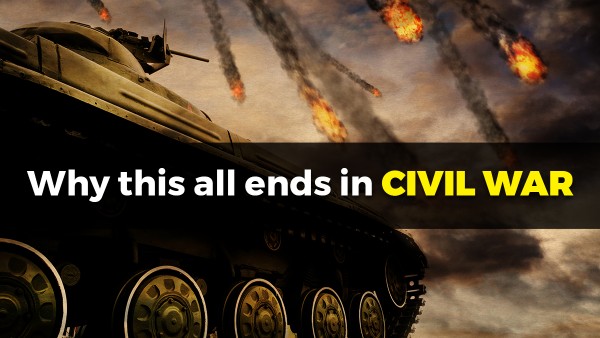 America is not fully grasping the threat posed to the Republic, despite the fact that all of the evidence is on the table. Many understand that we are rushing towards a civil war. However, what people do not realize is that we are headed towards a civil war that Deep State is willing to pay any price to carry out. Th e coming civil war is not the result of inevitable conflict. It is the result of a planned coup against the government of the United States, the culture, the education system and this conflict comes with distinct designs on conservatives and Christians. The United States is receiving a facelift which is transforming this country from respecting the rule of law and appreciating American culture, to one that stands on the edge of a third-world-banana-republic style coup against legitimate elected authority.

The Progression of a Coup Against America

Let’s start with a basic premise: The United States must be taken down because it flies in the face of the New World Order with notions such as freedom. This article, in part, will provide some insight as to how this is going to happen.

Let’s establish another premise for this article: The Democrats cannot win in 2020. They are too radical even for many members of their own part. Hillary is holding back her decision to run, just as Biden because they know the party has gone too far to the left and they are withholding their decision to run in order to gauge how much the American will reject the extremist policies of the left. One of these two will emerge as the more moderate choice for their party.

Recently, I have written a series of what seems to be, on the surface unconnected articles telling America how much trouble we are in.

Pelosi is trying to block all border security because she is making money off it as are here mafia connections. I wrote an article detailing how Pelosi comes from mafia, represents mafia and is still very much mafia. Pelosi serves the Black Nobility (ie Rothschild). And what goes on at the borer?

A Documented Review of the Evidence

I produced a podcast in which I detailed how so-called Red Flag laws were targeting Americans online behaviors to justify gun confiscation in no-knock raids. As I have point out on a number of occasions, this is the first step towards genocide as a people are rendered defenseless.

What goes on the border? Why isn’t Pelosi and Schumer moving to block what’s happening at the border? Answer?

Paul Preston, the President of the New California Movement, and myself have had several in-depth conversations about border security. After looking at this issue from every possible angle, it makes no sense that any member of Congress, including Nancy Pelosi, Kamala Harris, Elizabeth Warren, Bernie Sanders Chuck Schumer, et al, would ever oppose border security. lo hypocrites live in walled off homes and are worth from millions to billions. They employ armed security to protect themselves and their capitalist financial interests. They live behind gated communities, but they oppose the wall. You cannot speak with them without an appointment after thoroughly screening you. Yet, these people will not provide you with the same courtesy. They even have government officials to open their mail and check it for safety prior to ever seeing it. Yet, they will not provide you, the American citizen with even one small aspect of border security. They want totally disintegrated borders. Why? Because people like Pelosi ultimately serve the Black Nobility as her mafia background comes into play. She does not want to stop border incursions, because she is making a lot of money on border-related activities. Paul Preston calls this The San Francisco Treats.

The desire for the Deep State to promote a Deep State initiated civil war gains even move credcence in both here and here as I detailed the Jussie Smollett related plan to set off a series of race riots, based upon a false flag centered around a false flag event.

Following the clear message in the fallout of what happened with Smollett’s false flag attack upon himself, I had an epiphany as I realized that the nine elements leading to genocide have already been achieved in the American Deep State. Thanks to the Deep State and their Democratic minions, primarily the Obama administration, all 9 elements which are historically associated with a genocide are in place.

When one has moments to spare, it might prove prudent to review these articles which clearly documents that  a civil war has been declared against traditional, conservative America by the left who are underwritten by the New World Order.

Cognitive dissonance is an ugly thing and it can keep people from seeing what is really in front of them. Bystander apathy, a sociological concept can paralyze people and keep them from acting because someone else will fix the problem. However, as if the previous documentation does not validate the claim that a war, an eventual deadly war, has been declared against you, then you may wish to consider one more piece of recent evidence.

The gloves are off, subterfuge no longer rules the day. Former Obama official, Joshua Geltzer is calling for a civil war if Trump refuses to step down. Geltzer even provides the overall mechanics needed to connect the dots.

Geltzer gets very specific about the elements needed to implement against Trump in order to host a successful civil war. Geltzer identifies four groups must conspire to bring down Donald Trump:

We could stop with first group, the military, because this automatically qualifies as a civil war. Trump should arrest Geltzer for treason and surrection, but he won’t and for the life of me, I am perplexed by Trump’s failure to prosecute even one Deep State figure.