If there are readers out there who have any remaining doubts about whether there is a shadow government in the United States that has long usurped and exercised power not authorized by the Constitution, this article will hopefully put those doubts to rest. Furthermore, while this shadow government has arranged for itself the highest levels of self-protection and secrecy possible, the truth of its existence and motives has trickled out slowly over the past couple decades. In recent times, a huge increase in the number and volume of leaks suggests that the dam may be ready to burst.

Given the fact that the ‘Hillary Clinton email scandal’ has not gone away and it appears that investigations into it will resume, a look at how prior investigations into the scandal were obfuscated will provide us with a window into the mechanism by which this shadow government operates. Prior to the 2016 election, it was discovered that Hillary Clinton had used a private, non-secured server to store emails that contained sensitive, classified information. By July 2016, at a Public Hearing of the Oversight and Government Reform Committee into the matter (video below), it had already been determined that Hillary Clinton had ‘allowed somebody without a security clearance in a non-protected format to see’ the emails.

The Exposure Of Unconstitutional Authority

The Constitution of the United States of America grants the highest powers in the nation to the President and to Congress, as the elected representatives of the people. There are checks and balances in place to make sure that power is not being abused, one of which was brought forth in the 2010 Intelligence Authorization Act, which established the ‘Office of the Inspector General of the Intelligence Community’:

In accordance with Title 50 U.S.C.A. Section 3033, the Inspector General of the Intelligence Community (ICIG) conducts independent and objective audits, investigations, inspections, and reviews to promote economy, efficiency, effectiveness, and integration across the Intelligence Community. The ICIG does so with integrity, professionalism, and independence. We conduct our mission free of external influence and provide objective assessments, findings, and conclusions, regardless of political or personal consequence.

In the discussion below, House Representative Jason Chaffetz asks Charles McCullough, the Inspector General of the Intelligence Community, to provide his committee with Hillary Clinton’s classified emails in order for this committee of Congress, the highest authority in the nation, to properly do their job of oversight.

Chaffetz: “Can you provided this committee, in a secure format, the classified emails?”

McCullough: “I can to a certain extent. I cannot provide a certain segment of them because the agency… uhhh… that owns the information for those emails has limited the distribution on those, so… They’re uh… characterizing them as ORCON.”

Chaffetz: “Explain what ORCON is.”

McCullough: “Originator Control.” “…uh, so I can’t… I can’t give them to even Congress without getting the agency’s permission to provide them…”

McCullough: “I can’t say that here in an open hearing, sir.”

Chaffetz: “So you can’t even tell me which agency won’t allow us as members of Congress to see something that Hillary Clinton allowed somebody without a security clearance in a non-protected format to see, that’s correct?”

In this exchange, it is made clear by McCullough that Congress does not have authority over a certain government intelligence agency that the Inspector General dares not even name. This government agency claims ‘ownership’ of this classified information based on the concept of ‘Originator Control,’ which basically means that the agency has the power to limit and prevent  such information to be seen by the very bodies–the Inspector General and Congress–that are supposedly empowered to provide oversight of all their activities.

Please note that this is not a matter of ‘National Security,’ as it is a simple enough matter to make members of Congress aware of the need to keep information secret and have them ‘read in’ as it were. This was actually done with members of the ICIG staff, just so they could see the portion of those emails that the unnamed intelligence agency was actually willing to release.

However, the ‘elephant in the room’ at the hearing, made obvious by Rep. Jaffetz’ reaction to the answers he was hearing, is that this intelligence agency and the broader conspiracy of powers behind it have usurped Constitutional authority from Congress and have established the power to conceal information of their choosing from any oversight. In this particular case, it should be obvious that the only reason that this information is not being released to Congress is to protect Hillary Clinton from prosecution, since she is a well-entrenched member of this power and was set to do their bidding had she been elected President.

In the video below taken over a year later, we see what happens to someone like McCullough, who was simply trying to do his job of alerting Congress to the danger and violations involved in Hillary Clinton putting classified information on an unsecured server. Due to his resistance to the rhetoric of the Obama government, who tried to minimize the danger posed by Clinton’s actions, he was marginalized and even threatened:

Voiceover: As Election Day approached, McCullough says the threats went further, singling him out and another senior government email investigator.

Interviewer: You were given a warning?

McCullough: I was told that we would be the first two to be fired, with her administration, that that was definitely going to happen.

Interviewer: Is that how it’s supposed to be?

McCullough: No, I was in this context a whistleblower, I was explaining to Congress, I was doing exactly what they had expected me to do, and all of a sudden I was the enemy.

Voiceover: More than 2100 classified emails passed through Clinton’s personal server, and to this day, no one is accountable.

Interviewer: If you had done this, what would have happened to you?

The second half of the video below has Tucker Carlson talking with former Clinton Campaign Advisor Richard Goodstein about the matter, and I believe it is illustrative of the type of public relations tactics that have been used by the Clinton campaign as an attempt to avert criminal charges: minimize claims, challenge even the most basic and obvious truths, flat out avoid answering questions, and change the subject to demonize Donald Trump.

The layers of secret power within the shadow government, as McCullough suggests, have so far been able to prevent the prosecution of Hillary Clinton and her associates for this patently obvious criminal behavior. In fact, government committees who have the legal authority to investigate the matter appear to have neither the real power nor the ‘clearance’ to see the evidence they need to do their jobs. 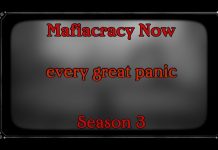