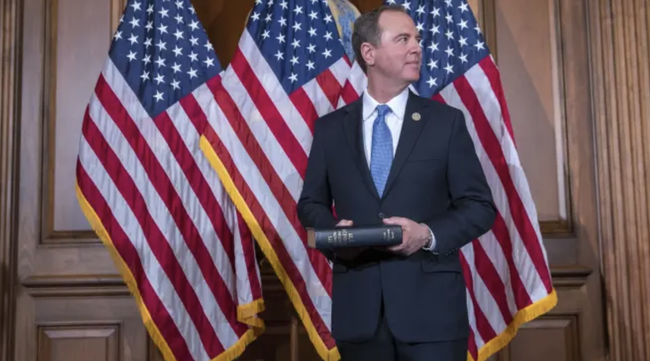 The Mueller report hasn’t even been completed yet, and already Congressional Democrats are already preparing to go to war with the DOJ to make sure its contents receive a public hearing (ignoring the virtual certainty that Mueller’s team will likely preempt them by leaking the text to the New York Times and Washington Post).

To wit, during an appearance on ABC’s “This Week” with George Stephanopoulos on Sunday, Intelligence Committee Chairman Adam Schiff – who was recently accused by WSJ columnist Kimberly Strassel of being the Dems’ “resident collusion conspiracy theorist” – vowed to take his fight for the release of the Mueller report to court if necessary after AG William Barr said he doesn’t intend to publish the contents of the report, and would instead offer a summary of its findings to Congress. Barr, who noted during his confirmation that the special counsel statutes state the findings of the report should be “confidential”, said he would release only as much information as is required by statute. He also noted that it was “DOJ policy” to withold potentially disparaging information about those who have not been accused of a crime.

In response, Schiff and six other House committee chairs wrote to Barr on Friday to argue that the DoJ had provided to the House in recent years “substantial amounts of investigative material, including classified and law enforcement sensitive information” and that this had set a new precedent for such disclosures.

During his interview with Stephanopoulos, Schiff doubled down on this, insisting that Barr has a “responsibility” to release the full report (note: he does not) and that Dems would demand not just Mueller’s final report in full, but also the “underlying evidence” from his investigation.

If these intimidation tactics don’t work, Schiff said he would subpoena the report, or even haul Mueller in for a public Congressional hearing if necessary to allow him the publicly detail the contents of the report (note: during the nearly two years since the probe began, Mueller has made almost no public appearances).

When Mueller’s investigation is complete, the report must be made public.

If Attorney General Barr tries to hide it, we’ll subpoena the report, insist on the underlying evidence, have Mueller testify, and take it to court, if needed.

But even once the protocol has been set aside, Schiff said that there’s an “intense public need to know” that trumps any precedent, pardon the pun. And if Mueller doesn’t cooperate with the Dems push to publicize the report, Schiff warned that it would forever “tarnish” his legacy.

Read a transcript from the Schiff interview below:

STEPHANOPOULOS: Well, that gets to a question about the Mueller investigation. If it turns out, as the president has said so many times, that he did not collude with the Russians to interfere in the election, but, in fact, he was pursuing this Trump Tower at the same time, if that’s not criminal, does Mueller have a responsibility to report it or no?

SCHIFF: He does have a responsibility to report it; and, in fact, if you take the position, and I think it’s a flawed one, but if you take the position that the president cannot be indicted, and the only remedy for improper, illegal or other conduct is impeachment, then you cannot withhold that information from congress, or essentially the president has immunity. So that cannot be allowed to be the case. Bob — or Bill Barr has committed in his testimony to making as much of the report public as he can. And the regulations allow him to make it all. We’re going to insist on it becoming public. And more than that, George, we’re going to insist on the underlying evidence because there is certain evidence is only in the hands of the Department of Justice that we can’t get any other way. There were searches conducted, for example, of Roger Stone and Paul Manafort. There’s no other way to get the information that was seized except through the department and we can’t tell the country fully what happened without it.