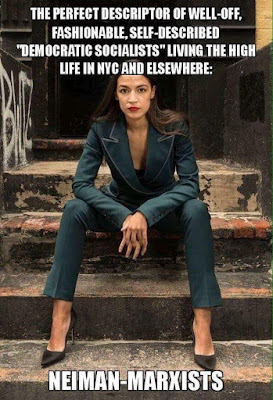 Alexandria Ocasio-Cortez is quickly validating her new moniker as a Neiman Marxist by the fact she just moved into a luxurious new condo barely a month after complaining she couldn’t afford rent in the DC area. But that has always been the ways of the Limousine Liberal as they love to decry wealth inequality among the

proletariat while they themselves live high off the hog.

So without deciding to take that dark road to investigate how someone like AOC could quickly go from waitress/bartender to prosperous politician in a matter of months, we will instead relish with glee a new poll out on Feb. 13 which shows that Americans don’t want the Socialism that she and many of the new Democrats are trying to push, and instead rally a cheer to the fact that Capitalism is once again rising in the hearts of the masses.

The meteoric rise of Alexandria Ocasio-Cortez and other young progressive politicians has led many to believe that the American public must be warming up to socialism. But what if that isn’t true at all? Certainly there is a certain segment of the population that absolutely embraces the message that AOC, Bernie Sanders, Elizabeth Warren and other socialists are preaching, but could it be possible that the American people as a whole are actually moving in the opposite direction? According to a shocking Fox News poll that just came out, the percentage of Americans that want the government to leave them alone is going up, and the percentage of Americans that want the government to lend them a hand is going down…