The New Emissions & Fuel-Economy Cheating Scandal is just a Dimple.

It’s tempting to think that Ford’s Carmageddon is a new “dieselgate” after Ford announced last night that “a handful of employees raised a concern” about its testing procedures for fuel economy and emissions certifications. Sure, Ford might get nailed. It’s furiously trying to make the getting-nailed less painful by announcing a slew of actions and self-reporting this debacle – well, the “potential concerns” – to the EPA and the California Air Resources Board rather than covering it up.

Ford might have to pay fines and face lawsuits. It – along with other automakers – has already been caught red-handed overstating fuel economy. No problem. It got through those debacles. Volkswagen got through dieselgate. Other automakers are going through, or have already settled, their own dieselgates. Corporate malfeasance can be costly. But it blows over.

This scandal is just a dimple compared to Ford’s global problem. Its vehicles sales have been on decline in Europe since 2008; they’ve essentially collapsed in China over the past two years; and they fell in the US for the past three years.

In addition to disclosing the testing debacle yesterday evening, Ford also filed its annual report (10-K). It contains audited numbers, including global annual vehicle sales — the number of vehicles that Ford sold to its dealers (that they then sell and “deliver” to their customers).

Across all automakers, the number of vehicles sold in China dipped 4% in 2018, as a solid beginning was wiped out by a sharp decline in the second half. 2017 had been a record year for the auto industry. For Ford, both years were Carmageddon. Its 2018 sales were not that much higher than its sales in 2012: 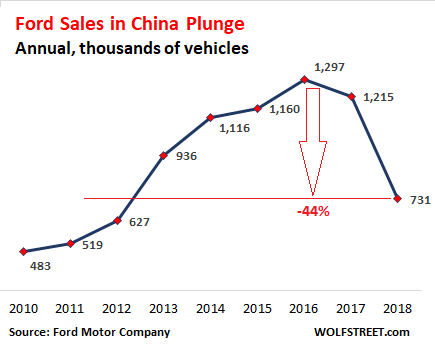 Ford’s US sales dropped for the third year in a row. 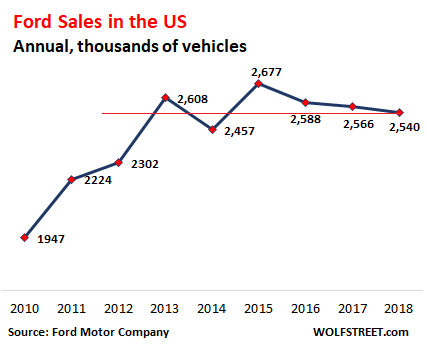 CEO Jim Hackett, whom Ford promoted in May 2017 from his Silicon Valley gig at Ford Smart Mobility, is running around the media-and-analysts circuit, pitching his layoffs-and-cost-cuts turnaround plan “Fitness Redesign,” after his predecessor flagellated his arms wildly, pitching his own layoffs-and-cost-cuts turnaround plan before getting sacked. These plans come with many billions of dollars in write-offs.

The idea of Smart Mobility, Hackett’s former gig, is to compete with Uber and Google and whatnot. The unit houses, among other things, self-driving ventures and a jewel called Chariot Transit, an app-based shuttle service Ford acquired in late 2016. At the time, it ran a few vans around San Francisco to shuttle folks between residential areas to tech-job locations. It then expanded to other cities and countries. It competed directly with city buses. A month ago, the high-tech venture was shut down. This kind of stuff sidetracks an automaker.

When the Eurozone went through the Financial Crisis and its subsequent Euro Debt Crisis, Ford’s sales plunged 37% between 2008 and 2013. Then they recovered. In 2018, sales rose to 1.44 million vehicles.  Quite a feat for a company whose global sales are swooning. But those 2018 sales were still down 16% from 2008: 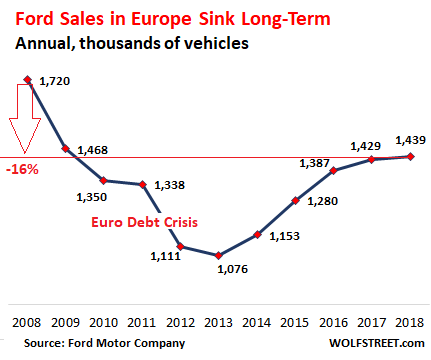 Ford sells vehicles around the world, in North America, South America, Europe, Russia, Turkey, across Asia and the Pacific region, in the Middle East, and Africa. These “Total Company” sales peaked in 2016 and have since dropped 10% to 5.98 million vehicles. This puts sales just above where they’d been in 2012 and 2011: