When Hillary Clinton decided to walk out on a stage and label Republican voters that supported the then-candidate Donald Trump as “Deplorables,”  two things happened simultaneously.

The First – Trump supporters embraced the label, started adding it to their online user names, ordering clothing that said ‘Deplorable,’ or ‘I’m Proud To Be A ‘Deplorable‘, or ‘Proud Member of The Basket of Deplorables,’  just to name a few, while Candidate Trump  folded the label right into his campaign at rallies with a huge sign behind him that said “Les Deplorables.”

The Second  – The media was handed an enemy, not just the Republican candidate for president, but his supporters. The media allowed people to come on to their shows and call Trump supporters “rapists,” “racists,” “Nazis,”  “white supremacists,” and a whole host of other deragotory names, as the media jumped on any and all stories that reflected badly on those “Deplorables.”

The media also jumped on every story told about “Trump supporters” attacking other people. No research, no investigative journalism, just mindlessly repeated the claims, made them go viral, yet downplayed or ignored when those claims ended up being debunked, not just by Independet Media, but by law enforcement, as many of the “victims,” ended up being arrested and charged for faking a hate crime and perpetuating a hoax and false police reports.

Recently some of those examples were highlighted by Daily Wire reporter Ryan Saavedra, in a  long Twitter thread.

Since the media loves to do their “Republicans pounce” pieces every time a liberal gets caught in a scandal or says or does something foolish, lets say the “media pounced” on the list of stories below that turned out to be hate hoaxes. 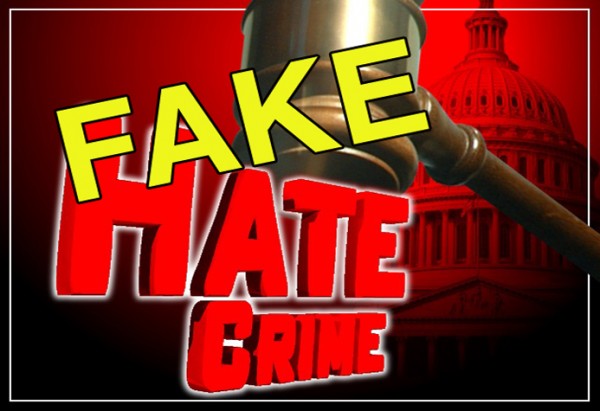 On December 1, 2016, a Muslin-American woman reported that three drunk men attacked her and tried to remove her hijab, while shouting Donald Trump’s name. By December 16, 2016, the woman, “Yasmin Seweid, 18, of New Hyde Park, N.Y., on Long Island, was arrested for obstructing government administration and reporting a false incident, Sgt. Brendan Ryan of the NYPD told USA TODAY.”

In November 2018, the University of Michigan Department of Public Safety and Security issued a crime alert after a young woman claimed she was approached by a man that told her if she didn’t remove her hijab he would light her on fire with a lighter. According to that crime alert, “witnesses,” described the man as a “white male between the ages of 20 and 30.” Towards the bottom of the alert, it even specified that these types of incidents were being reported “Following Election Day and President-elect Donald Trump’s win.”

Say it with me everyone…….the media POUNCED! (Archive.is link here since Wapo is behind a paywall)

Showing  the reason the media jumps on the bandwagon before investigations are complete is this line from the Wapo piece “The investigation comes amid reports of threats and harassment in several parts of the country after the election of Donald Trump. Many of the incidents were directed toward African Americans, immigrants, Muslims and the LGBT community………”

By mid-December, the police declared the incident never happened. “During the course of the investigation, numerous inconsistencies in the statements provided by the alleged victim were identified. Following a thorough investigation, detectives have determined the incident in question did not occur.”

November 2016, a Muslim Louisiana student claimed she was robbed, and one of her attackers were wearing a Donald Trump hat. She claimed they hit her with a metal object, stole her wallet and her hijab.

Yup, you know what is coming….. the media pounced! Here is how Wapo started their story: “A female student at the University of Louisiana at Lafayette was beaten, robbed and had her hijab ripped off by two men, one of them wearing a white “Trump” hat, police and university officials said.”

Bet you know what else is coming, right? Updated reports show that the woman admitted to making up the entire thing.

April 2016, a Muslim woman claimed she was attacked by a white male that called her a terrorist and slashed her cheek with a knife.

I don’t even have to say it, you know what happened……. so we will move along to the fact that her wound was determined to be self-inflicted, she wasn’t attacked and she ended up having to undergo a psychiatric evaluation.

September 2018, another New York woman, 19-year-old Adwoa Lewis, told police she was harassed by four teenagers that told her she didn’t belong here, and yelled “Trump 2016!. She also claimed the next morning she awoke to find her tires slashed and a note that said “Go Home.”

Days later Lewis “was charged with fabricating a story about a Trump-related hate crime.”

In late November 2018, students at Drake University received what the media called “racist” notes. The “media pounced,” and made a big deal about the victims that were targeted.