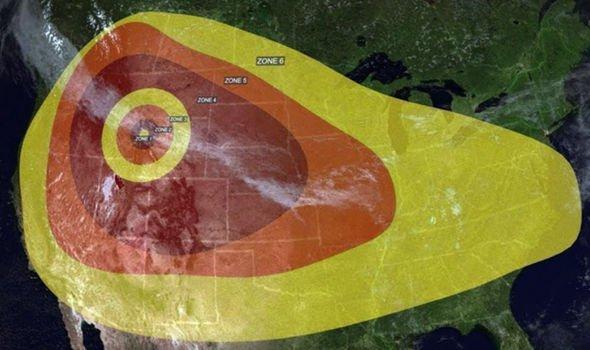 One day it will happen.  Scientists assure us that one day the absolutely massive Yellowstone supervolcano will once again experience a Category 8 eruption, and if it happened today it would “literally tear the guts out of the United States of America”.  That is why what has been happening at Yellowstone in recent months is so alarming.  We know that the ground has been rising and that “a 465-mile-long piece of molten rock” is moving upwards directly under Yellowstone.  And we also know that the major geysers at Yellowstone were more active last year than in any other year in any of our lifetimes.  Are these signs that an eruption is coming?  We better hope not, because as Dr. Michio Kaku recently told Fox News, there is “a sleeping Godzilla underneath Yellowstone”…

“We’re talking about a sleeping Godzilla underneath Yellowstone, that if it erupts in a maximum eruption called Category 8, it can literally tear the guts out of the United States of America.

We live at a time when seismic activity has been increasing all over the world, and Yellowstone has also been exhibiting very unusual behavior.

However, Dr. Kaku says that we shouldn’t worry too much, because he believes that we will get warnings about a Yellowstone eruption in advance…

“Unlike a meteor from outer space, where you get no warning whatsoever, we get warnings.

“If you see movies like Pompeii, you know that there are days, in fact, weeks of eruptions building up, rumbling inside, underneath the pocket of lava.

“So there would be enough time, several weeks, to begin evacuation if and when such an unlikely event were to take place.”

But what if we have been ignoring the warnings that we have already been getting?

For example, Steamboat geyser erupted more times in 2018 than in any other year in history.  The following comes from National Geographic…

The Yellowstone Volcano Observatory reports that Steamboat has now set a record by erupting a whopping 32 times in 2018, a personal best for the geyser for a single calendar year. Previously, this geyser made it as high as 29 paroxysms back in 1964.

Other nearby geysers have also been behaving fairly interestingly of late. Ear Spring Geyser, for example, has been pretty quiet since 1957, but it erupted spectacularly a few months back—and sprayed human garbage from the 1930s everywhere.

Prior to last year, there had not been an eruption of the Steamboat geyser for three and a half years.

In addition, the ground under Yellowstone has been steadily rising for the last few years, and the area was hit by 121 earthquakes in the month of December alone…

“In the area of Norris Geyser Basin, GPS data indicate a minor amount of uplift over the past few months, with a total uplift of about 2cm during 2018, also continuing the trend that has been ongoing since 2015.”

In the same Yellowstone update, the USGS revealed a total of 121 earthquakes were recorded in the Yellowstone area in December 2018 alone.

It is indeed possible that when Yellowstone finally erupts that we will get more of a warning than this.

But it is also possible that we will not.

When Yellowstone blows, life as you have known it will instantly be over.  If you are not in the immediate kill zone, you will have an opportunity to try to survive, but it won’t be easy.  One survivalist expert suggests that everyone should “head east as fast as you can”…

“After the second zone, your chances of surviving increase, but still head east as fast as you can.

“Beyond zone six is where you would be the safest in the US for the short term, but the wind will greatly determine where ash falls.”

Personally, I don’t know if that is the best approach.  The roads will be absolutely clogged, and there is no way that you are going to outrun the volcanic ash.  If you get completely buried in volcanic ash in your vehicle, it will all be over.

Of course the truth is that if Yellowstone experiences a Category 8 eruption most Americans will eventually die no matter what they do.  The following is an extended excerpt from one of my previous articles…

Hundreds of cubic miles of ash, rock and lava would be blasted into the atmosphere, and this would likely plunge much of the northern hemisphere into several days of complete darkness. Virtually everything within 100 miles of Yellowstone would be immediately killed, but a much more cruel fate would befall those that live in major cities outside of the immediate blast zone such as Salt Lake City and Denver.

Hot volcanic ash, rock and dust would rain down on those cities literally for weeks. In the end, it would be extremely difficult for anyone living in those communities to survive. In fact, it has been estimated that 90 percent of all people living within 600 miles of Yellowstone would be killed.

Experts project that such an eruption would dump a layer of volcanic ash that is at least 10 feet deep up to 1,000 miles away, and approximately two-thirds of the United States would suddenly become uninhabitable. The volcanic ash would severely contaminate most of our water supplies, and growing food in the middle of the country would become next to impossible.

In other words, it would be the end of our country as we know it today.

The rest of the planet, and this would especially be true for the northern hemisphere, would experience what is known as a “nuclear winter”. An extreme period of “global cooling” would take place, and temperatures around the world would fall by up to 20 degrees. Crops would fail all over the planet, and severe famine would sweep the globe.

In the end, billions could die.