In this new story over at Zero Hedge they report upon a recent appearance on the Laura Ingraham show made by former federal prosecutor Joe diGenova who didn’t bother to mince his words at all.:

“There’s two standards of justice, one for Democrats one for Republicans. The press is all Democrat, all liberal, all progressive, all left – they hate Republicans, they hate Trump. So the suggestion that there’s ever going to be civil discourse in this country for the foreseeable future in this country is over. It’s not going to be. It’s going to be total war. And as I say to my friends, I do two things – I vote and I buy guns.”

That warning from diGenova came the same week as several other different dire warnings with Conrad Black over at the Center for American Greatness warning our nation is facing the greatest Constitutional crisis since the Civil War while former Trump advisor Steve Bannon also warns that “2019 is going to be the most vitriolic year in American politics since the Civil War“.

With Bannon also predicting that the Demonrats, who long ago sold out America for global government and their luciferian ‘new world order‘, will ‘weaponize‘ the Robert Mueller report against President Trump, the comment below from this Zero Hedge story about diGenova warning of civil war ahead speaks volumes.

Here is incontrovertible reality. The Mueller probe is an attempt to overturn an election by the career non-politicians, those who head up our intelligence agencies. They are the ones responsible for bringing us closer to a civil war. Our MSM has revealed itself to be an arm of the Deep State machine. I wouldn’t have believed it possible until witnessing what they have done and are still attempting to do to Trump.

You have sit back and really reflect on what happened immediately upon Clinton losing. An absolute panic rippled through the social services leadership. They freaked out, they showed their hand. How Mueller can look anyone in the eye is beyond me. He has proven himself to be a hired assassin who thought he could pull this off. The sheer arrogance he and the other traitors who were a part of this should be tried for treason. Every last one of them and I am not being hyperbolic. They ought to be held accountable for their attempted coup. Make no mistake about it, they are all criminals. 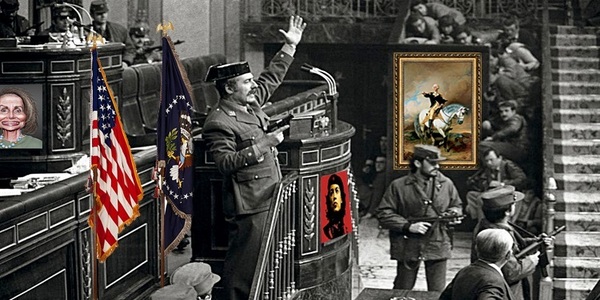 As Black warns in his must-read story also linked to by the Drudge Report several days ago, “the most immense and dangerous public scandal in American history is finally cracking open like a ripe pomegranate. The broad swath of the Trump-hating media that has participated in what has amounted to an unconstitutional attempt to overthrow the government are reduced to reporting the events and revelations of the scandal in which they have been complicit to the misinformed public that this is as routine as stock market fluctuations or the burning of an American flag in Tehran.”

As Donald Trump Jr. recently told Fox & Friends, the tactics used by Robert Mueller’s stasi goon squad upon Trump’s family and businesses are nothing less than ‘Stalinist‘. And we shouldn’t be the least bit surprised with the rapid move towards the left now being made in America nothing less than the culmination of decades of hard work of globalists here in America.

The left’s descent into totalitarianism can also seen in remarks recently made by Congresswoman Alexandria Ocasio-Cortez as reported in this Daily Wire story which shared AOC’s recent tweet: “Yup. If you don’t like the #GreenNewDeal, then come up with your own ambitious, on-scale proposal to address the global climate crisis. Until then, we’re in charge – and you’re just shouting from the cheap seats.”

Also attempting to dictate how many children Americans should have, Republican actor James Woods slammed her back in a tweet that should be a sharp and very clear warning to all ‘wanna-be-totalitarians‘ in America as Woods alluded to the Revolutionary War and “with Americans armed to the teeth, that stuff doesn’t fly here.”

So, you may have missed this, but the way it works in America is YOU work for US. The last time somebody told Americans to sit down and shut up was 1776. If you ever learn to read, look it up. You are not only a idiot, you’re an arrogant idiot, and there is nothing more dangerous.

While Mueller and his witch hunt upon President Trump continue to grasp at straws, leaving almost half of the American people actuallybelieving something will come of this spectacle, Freedom of Information documents obtained by Judicial Watch reveal “the top brass of the Obama FBI went to great lengths to justify their decision not to recommend charges against former Secretary of State Hillary Clinton for mishandling classified information and the agency created a ‘chart’ of Clinton’s offenses.” Via Judicial Watch.:

Three days after then-FBI Director James Comey’s press conference announcing that he would not recommend a prosecution of Mrs. Clinton, a July 8, 2016 email chain shows that, the Special Counsel to the FBI’s executive assistant director in charge of the National Security Branch, whose name is redacted, wrote to Strzok and others that he was producing a “chart of the statutory violations considered during the investigation [of Clinton’s server], and the reasons for the recommendation not to prosecute…”

So why are people such as Hillary Clinton given a free pass despite a laundry list of crimes, including treason, committed against the American people? And with Hillary’s crimes and free pass a perfect example of what diGenova had earlier warned of, how does the left even think this will pass with the American people when our own Declaration of Independence offers us the “immortal declaration and perhaps the single phrase of the American Revolutionary period with the greatest continuing importance”: “All men are created equal.”

Yet Democrats attempt to demonize nearly half or more of the US population as ‘deplorables‘. With the left’s attempt to ‘dictate‘ to Americans sure to blow up in their faces with Americans a free people who’ll never put up with a fully authoritarian government in this country, we thought we’d take a quick look at what might happen in the US should civil war break out here in 2019, a prospect we should all pray never happens as practically everything will change instantly.