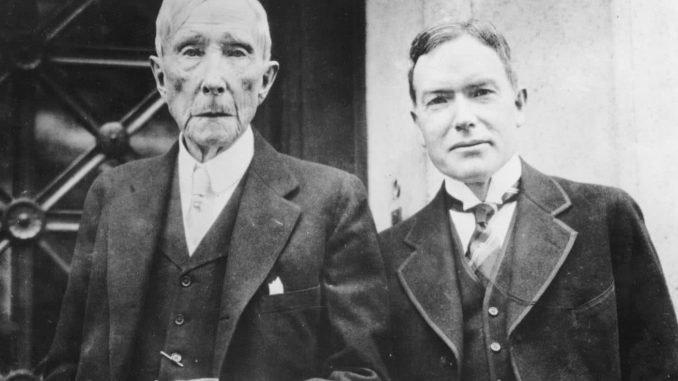 Revelations by the late Dr. Richard L. Day in 1969 may have been shocking at the time, but not so much now as they have started coming true.

Dr. Day was an eminent physician, a professor of pediatrics at the Mount Sinai School of Medicine in Manhattan and Medical Director of the ‘Planned Parenthood’ organization.

He was also described as an ‘insider of the Order’ referring to the ‘Order of the Barbarians’ (as those involved in an elite group committed to the ‘New World Order’ were known as at the time), which are now referred to as the globalist elite.

During a closed lecture to other doctors in 1969, Dr. Day said the cure for cancer was on file at the Rockefeller Institute.

His audience was shocked when he told them: “We can cure almost every cancer right now. Information is on file in the Rockefeller Institute, if it’s ever decided that it should be released.”

Dr. Dunegan recalls what Dr. Day said very clearly because he found it unbelievable (as did the other attendees) that an institute who could effectively treat one of the most destructive diseases known to humanity would withhold that knowledge.

Dr. Day continued “But consider – if people stop dying of cancer, how rapidly we would become overpopulated. You may as well die of cancer as something else.”

He then went on to explain that treatment would be geared more towards easing some of the symptoms and making the sufferer comfortable rather than a cure.

Although the Rockefeller Institute has taken precautions to hide the information within the institute, Dr. Day said that one day it may come to light if independent researchers get close to developing the same technology and cure. But for the time being, letting people die of cancer was a good thing because it would slow down the problem of overpopulation.

As with the attendees at the meeting, any normal thinking person may disbelieve that an organization which purports to research cures and new medical treatments would withhold this vital information. But as we have seen many times before, where there is power and money anything can happen, especially when the supporters of eugenics are involved.

So let’s take a look at the Rockefeller Institute.

The institute was founded in 1901 by John D. Rockefeller, an American business magnate who was one of six children born to con artist/traveling salesman, William Avery “Bill” Rockefeller, and housewife Eliza Davison in Richford, New York in 1839.

Rockefeller made his fortune in the oil and petroleum industries through Standard Oil, eventually developing them to hold significant shares of the petroleum and oil markets in the U.S. until antitrust laws curtained their significant holdings.

At the time of his death in 1937 Rockefeller’s wealth made him the wealthiest person in recent history, far surpassing the fortune of Bill Gates.

The institute was the first biomedical institute in the United States and initially concentrated on biomedical engineering. It became the first institute for clinical research in the U.S. when it opened The Rockefeller Hospital on the campus in 1910.

Some of the scientific breakthroughs attributed to the institute are:

The institute moved into the area of education in 1955 to expand its interests. It granted its first honors degree in 1959, and became the Rockefeller University in 1965, with many students since going on to gain influential positions in other universities, industry, and other fields.

Since the institution’s founding in 1901, 24 Nobel Prize winners have been associated with the university. Of these, two are Rockefeller graduates and five laureates are current members of the Rockefeller faculty.

At the time of writing, David Rockefeller (the oldest living member of the family at 99 years of age) is Honorary Chair of the University. After graduating from the University of Chicago in 1940, and a brief time as secretary, he joined the military at the outbreak of World War 2.

When he left at the end of the war, he joined his uncle’s company, Chase National Bank (primarily a wholesale bank), which is closely associated with the oil industry, especially what was to become Exxon Mobil.

In 1955 the bank moved more into retail banking, changing its name to Chase Manhattan Bank, which is now known as JPMorgan Chase. By 1969 Rockefeller had become chairman of the bank and continued until his retirement in 1981.

Chase Bank has been involved in many controversies in its various guises over the years, including the purchase of Nazi Germany’s Reich Marks and releasing funds to Nazi Germany during World War 2, and refusing to release funds belonging to Jews in occupied France. In more recent times, JPMorgan has been involved in the Enron scandal, guilty of speculative trading, and numerous others. It has been referred to as the ’most controversial bank’ by Forbes.

In 1973, Rockefeller founded the Trilateral Commission together with Zbigniew Brzezinski, as an independent body bringing prominent political and business figures together with the publicized aim of promoting political and economic dialogue across the world at a time of; considerable friction; among governments. The Commission is divided into three regional divisions, European, North American, and Asia Pacific.

The Commission has received considerable criticism since its inception. Most notably claims that the Commission is pivotal (in league with other organizations) in promoting and plotting to instill a world government system as part of a global push by influential organizations (such as major world financiers) towards a New World Order – ruled by a secret elite.

The Trilateral Commission also has very close ties with the Council on Foreign Relations, one of the oldest and most influential think tanks in the USA. There is also some crossover between the memberships of the two organizations. The Council on Foreign Relations’ David Rockefeller Studies Program’ is the hub of the think tank and employs 70 full-time ‘scholars’ and ‘practitioners’ who use their expertise and knowledge in covering issues affecting ‘today’s global agenda’.

THE HORRENDOUS, UNDENIABLE IMPACT OF MRNA INJECTIONS ON MORTALITY