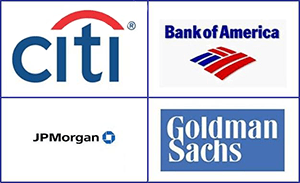 At the end of 1999, the year that President Bill Clinton and his  Treasury Secretary Robert Rubin brokered the deal to repeal the Glass-Steagall Act of 1933 and allow the casino investment banks on Wall Street to gobble up deposit-taking banks, there were 10,220 federally insured banks and savings institutions in the United States. Today, that number stands at 5,397, a decline of 47 percent according to the Federal Deposit Insurance Corporation (FDIC). What exactly happened to those disappeared banks?

The loss of competition in banking services has unleashed an unprecedented concentration of the life savings of Americans being held as deposits at a handful of behemoth Wall Street banks which simultaneously engage in high risk securities and derivatives trading – the very combination that led to the epic Wall Street banking collapses in 2008 and the 1930s.

According to the FDIC, as of September 30, 2018 (their latest data available) there was a total of $13.6 trillion in deposits at all 5,397 Federally insured banking and savings institutions. Of that total, just nine banks represented 40 percent of all domestic deposits. Those nine are the insured banking units of the holding company for JPMorgan Chase which held $1.3 trillion in domestic deposits; Bank of America at $1.36 trillion; Wells Fargo with $1.27 trillion; Citigroup at $504 billion; U.S. Bancorp $314 billion; Morgan Stanley $181 billion; BB&T $161 billion; Goldman Sachs $130 billion; and State Street $108 billion.

Earlier this month, BB&T announced its all-stock merger with SunTrust, which, if approved, would give it approximately $324 billion in deposits. Just what America doesn’t need is more deposit concentration which puts the taxpayer on the hook to bail out these mega banks.

When it comes to U.S. banks, size does matter. The FDIC’s Deposit Insurance Fund has only $100.2 billion as of September 30, 2018. Should one of the mega Wall Street banks get into trouble again, as Citigroup did in 2008, the taxpayer would be back on the hook for another epic bailout. The paucity of the FDIC’s fund is why the Federal Reserve was secretly funneling $16 trillion in low-cost revolving loans to Wall Street banks from the end of 2007 through at least the middle of 2010.

This high concentration of U.S. deposits among a handful of Wall Street banks who are also the largest holders of derivatives poses enormous risks today, just as it did in the 2008 collapse. In 2016 researchers at the U.S. Treasury’s Office of Financial Research (OFR) detailed for federal regulators and the general public the dangers building up inside these highly inter-connected Wall Street banks. The OFR report effectively stated that the Federal Reserve’s stress tests were failing to capture the predominant risk on Wall Street. According to the OFR researchers, the critical issue is not what would happen if the largest derivative counterparty to a specific bank failed. It’s what would happen if that counterparty happened to be the counterparty to other systemically important Wall Street banks. (After the big insurance company, AIG, couldn’t pay its Wall Street counterparties in 2008 and required a $185 billion taxpayer bailout because it was the credit default swap counterparty to the major Wall Street banks, one would think the Fed would have gotten the message.)

The OFR researchers correctly found that the Fed’s stress test “looks exclusively at the direct loss concentration risk, and does not consider the ramifications of indirect losses that may come through a shared counterparty, who is systemically important.” By focusing on “bank-level solvency” instead of the financial system as a whole, the Federal Reserve is very likely dramatically underestimating the fragility of the U.S. financial system in times of stress. 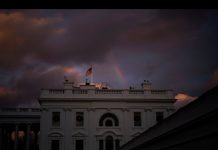