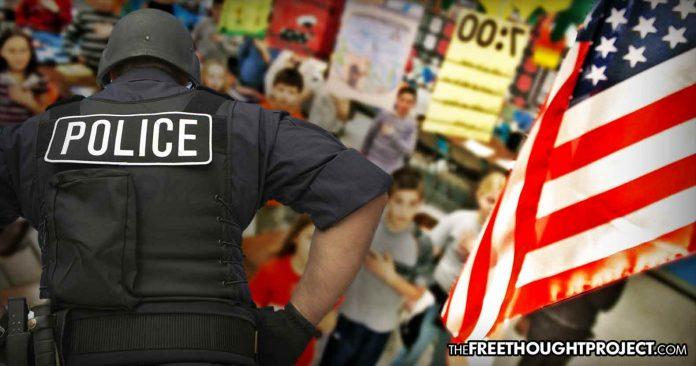 After peacefully refusing to recite the Pledge of Allegiance because he believes it is racist, an 11-year-old boy was arrested and thrown in juvenile detention.

Lakeland, FL — In the land of the free, little boys can and will be thrown in jail after refusing to recite the Pledge of Allegiance in school. Now, a mother is speaking out after this exact same scenario happened to her child who is in the gifted program at Lawton Chiles Middle Academy in Lakeland, Florida.

The incident unfolded earlier this month when Dhakira Talbot’s 11-year-old son politely refused to stand for the Pledge of Allegiance. The class had a substitute teacher that day who felt it was her duty to force this student to pledge his obedience to a flag that he feels is racist. So a conflict began.

When the boy refused to stand for the pledge, the teacher gave the standard statist response of “Why if it was so bad here he did not go to another place to live?” This is the more polite version of “move to S’molia!”

But the boy had an answer ready, saying, “they brought me here.”

Despite the entirely inappropriate conversation with the 11-year-old, the teacher kept pressing the issue, telling the child, “Well you can always go back.”

After instigating the entire debacle, the teacher then called the office to remove the student from class for daring to assert his freedom of speech.

“Then I had to call the office because I did not want to continue dealing with him,” the substitute teacher said.

“She was wrong. She was way out of place,” the boy’s mother said. “If she felt like there was an issue with my son not standing for the flag, she should’ve resolved that in a way different manner than she did.”

When the student refused to be bullied by a system he feels is out to get people of color, like him, the system then proved his claims. The school police officer then responded to the classroom and arrested the child.

He was arrested and charged with multiple misdemeanors and brought to juvenile detention.

The boy admitted to being disruptive because of the situation and being forced to pledge allegiance, but he and his mother both dispute the claim of threatening the teacher.

The teacher has since been removed from the system and the school district says they are investigating the incident. According to a spokesperson from the district, students are not required to pledge allegiance to the flag. Apparently, this teacher didn’t get the memo.

“I’m upset, I’m angry. I’m hurt,” she said. “More so for my son. My son has never been through anything like this. I feel like this should’ve been handled differently. If any disciplinary action should’ve been taken, it should’ve been with the school. He shouldn’t have been arrested.”

“I want the charges dropped and I want the school to be held accountable for what happened because it shouldn’t have been handled the way it was handled,” Talbot said.

As the Free Thought Project previously reported, according to statistics released by the U.S. Department of Education and published by NBC News, in the 2011-2012 school year, teachers called the cops on students a total of 31,961 times in the state of California alone, leading to 6,341 arrests.

If an 11-year-old boy was arrested for being unruly in the 90’s, you can rest assured that this would not fly. Instead, it has become the go-to approach in the land of the free.

Last May, we reported on the video showing a San Antonio Independent School District police officer body slam a 12-year-old girl. In February, the Free Thought Project brought you the story of the Baltimore School cop who was seen beating a student who had done nothing wrong.

In fact, recent videos have revealed a myriad of school cops attacking unarmed students. In December, Officer Rigo Valles was cleared of any wrongdoing after grabbing a student by the neck and slamming him to the floor. In October, Richland County Deputy Ben Fields was fired after students recorded him flipping over a girl’s desk and dragging her across the floor. Oklahoma City Master Sgt. Thomas Jaha was charged with assault and battery in October as well, after repeatedly punching a student in the face for not having a hall pass.

And these are the ones the public knows about. How many more incidents, just like this one, go unreported and unpunished?