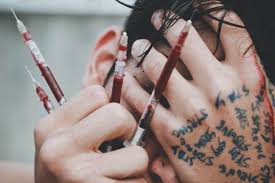 A clinical trial called “Ambrosia” seeks to discover the long-sought Fountain of Youth – and some scientists believe they’ve found it in the blood of young people.

Unlike most clinical trials, people actually paid to participate instead of the other way around. Patients over the age of 35 ponied up $8000 to take part in the experiment where they get transfusions of young blood, run by Dr. Jesse Karmazin.

People are getting transfusions of “young blood” to slow aging.

Unsurprisingly, the  “experiment” is taking place in Monterrey, California, right on the edge of Silicon Valley.

Ambrosia, the vampiric startup concerned, is run by a 32-year-old doctor called Jesse Karmazin, who bills $8,000 (£6,200) a pop for participation in what he has dubbed a “study”. So far, he has 600 clients, with a median age of 60. The blood is collected from local blood banks, then separated and combined – it takes multiple donors to make one package. (source)

Although the results of the “trial,” which has been ongoing since at least 2017, have not been published, Karmizan is so certain of his science that he intends to open a business selling transfusions of “young blood.” (You know, since charging a participant $8000 to be part of a “study” isn’t a business.)

Dr. Karmazin, who plans to open a business selling young blood, says patients who’ve had it say they feel amazing, and he says he’s seen evidence of reversing the aging process in rats.

“Their brains are younger, their hearts. Their hair, if it was gray, it turns dark again,” he said. (source)

Is anyone reminded of that creepy medieval countess who bathed in the blood of 650 of her serving wenches to remain young? Some say that Elizabeth of Bathory was the inspiration for Bram Stoker’s Dracula. The blood of young people as the fountain of youth is far from a new idea.

Studies going back decades show the regenerative effects of one organism being joined to another. In the 17th century, Robert Boyle – he of Boyle’s Law – suggested “replacing the blood of the old with the blood of the young”. (source)

And Ambrosia isn’t the only vampiristic game around.

Ambrosia has some competition on the East Coast. A society gala in West Palm Beach, Florida took place last year to scare a bunch of 60-somethings into dropping some cash to take part an another “experiment” run by Dr. Dipnarine Maharaj. And by some cash, I mean up to $285,000 apiece.

Then there’s the West Palm Beach symposium, held to recruit participants for a study testing what happens when aging people get infusions of plasma (the fluid part of blood packed with signaling proteins and other molecules but no red or white cells) from young people who’ve taken a drug meant to activate their immune system. Maharaj, a Scottish-trained hematologist and oncologist with a flair for salesmanship, plans to run the 30-patient trial at the private practice he owns in Boynton Beach, Fla.

The study, which he describes as a Phase 1/Phase 2 trial, is a first-in-human test, which means that it is designed to evaluate only whether the experimental therapy is safe. But in his remarks at the symposium, Maharaj didn’t hesitate to make bold promises about what the treatment could do to ameliorate the frailty that results from getting older. (source)

The irony of the so-called “young blood project” being introduced within 250 miles of Ponce De Leon’s Fountain of Youth was not overlooked.

“Hopefully, one day we’ll be able to announce that Florida is truly the fountain of youth,” Maharaj told the crowd inside while he talked up his clinical trial. (source)

Who is getting these blood transfusions?

All sorts of people are apparently jumping on the young blood bandwagon.

According to a report from 2017, two-thirds of the participants in this study are men.

The idea has become faddish in tech circles. While anti-ageing products usually hold more appeal with women, two-thirds of the more than 65 participants who have signed up for this trial are men. Mike Judge’s Silicon Valley sitcom recently parodied the notion, with arch-tech guru Gavin Belson relying on a “blood boy” following him around to donate pints of sticky red at inopportune moments.

That fictionalised account may well be based on the real-life adventures of Peter Thiel, the PayPal founder, who has expressed interest in having transfusions (Gawker even reported that he was spending $40,000 (£31,000) a quarter on regular transfusions from 18-year-olds). He, and various other thinkers who radiate out towards the death-evading “transhumanist” movement, are fascinated by “heterochronic parabiosis” – the sewing together of two animals in order to create a living chimera. (source)

That’s some seriously creepy stuff and I’m sure the things we know are only the tip of the creepy iceberg.

Even Google is getting on board the antiaging bandwagon.

The business of promising youth to people who are aging is nothing new. For as long as humans have been in situations where they weren’t constantly fighting for mere survival, many of those humans have tried to delay the inevitable.

But now, with advances in science, it seems that the lines of science fiction and reality are getting blurred. And there’s a lot of money to be made.