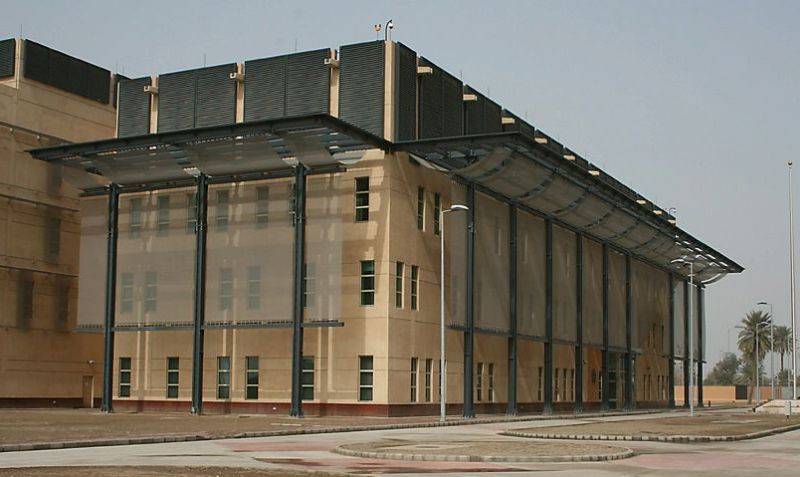 Why is America’s Baghdad Embassy the world’s largest embassy — and the largest by far?

“It’s as if the US Embassy is there not only to protect American interests, but to manage the entire world from the heart of the capital, Baghdad.”

— Iraqi Sheikh Qassim Al Ta’ee, as quoted on 27 December 2011 in Al Iraq News and translated by Ibrahim Zaidan from the original Arabic by Nicholas Dagher

Zaidan’s article went on to say:

The world’s largest embassy is situated in the Green Zone and fortified by three walls, another barrier of concrete slabs, followed by barbed wire fences and a wall of sandbags. It covers an area of 104 acres, six times larger than UN headquarters in New York and ten times larger than the new embassy Washington is building in Beijing – which is just 10 acres.

So, America’s largest diplomatic mission is surrounded by high concrete walls, is painted in black, brown and grey and is completely isolated from its environment. … The United States announced several months ago that between diplomats and employees, its embassy would include 16,000 people after the pullout of US forces.

On January 1st, Will Sillitoe headlined at the Helsinki Times, “What does the US embassy in Baghdad export to Finland and dozens of other countries?” and he reported that:

More than a million kilograms of cargo were shipped from Baghdad to different parts of the world, reveals US embassies procurement documents.

Mysterious cargo shipments from the US Embassy in Baghdad to other American embassies and consulates around the world have been revealed on a Wikileaks’ database. Procurement orders of US embassies are public documents, but Wikileaks put them in a searchable database making it easier to analyse.

The database displaying worldwide US embassy orders of goods and services reveals Baghdad as a postal and shipping centre for tonnes of freight.

Though military freight might be expected between the US and Iraq, records show that embassies across Europe, Asia, the Middle East, the Americas and Africa are all receiving deliveries from Baghdad too.

According to Wikileaks’ database, orders to ship more than 540 tonnes of cargo to the US were made in May 2018. The same document shows other main delivery destinations included 120 tonnes of freight to Europe, and 24 tonnes to South Africa, South America and Central Africa respectively. …

On December 29th, Sillitoe had headlined “Guarded warehouse near airport and mysterious cargos from Baghdad; what is the US embassy in Helsinki up to?” and he opened:

Why does the US Embassy in Helsinki need a big warehouse near Malmi Airport and what are the contents of thousands of kilograms of cargo sent to Helsinki from Baghdad?

A dilapidated warehouse in Malmi is being used by the US Embassy for unknown operations after a Wikileaks release revealed its location.

The anonymous looking building on Takoraudantie is notable only for the new 427 meter perimeter fence that according to the Wikileaks’ database was ordered by the US Embassy in April 2018.

Situated across the street from the main entrance of Malmi Airport, the warehouse with its 3 meter high security fence appears an unlikely location for official embassy business. Neighbouring companies include a car yard and a tyre warehouse.

Helsinki Times visited the perimeters this weekend. Security personnel, young Finns in uniforms with American flags on their arms, appeared nervous and suspicious when asked to comment on the warehouse. …

Sillitoe closed that article by saying: “The searchable Wikileaks database and info about Finland related activities can be found HERE.”

Item 2 there is “Packing of unaccompanied air baggage (UAB) – Throughout Iraq – US Embassy Baghdad, Baghdad International Zone, US Consulate General in Basrah, US Consulate General in Erbil, US Baghdad Diplomatic Support Center, US Erbil Diplomatic Support Center (Note: under the specified unit of measure the US Government contemplates ‘per kilogram’ of gross weight in kilograms)”

There are 11 such categories:

Each one of those eleven will receive 30,000 kilograms, under the contract.

In addition, around another 1,091,287 pounds are going from the Baghdad Embassy to other locations throughout the world.

The RFP, or Request For Proposal, informs its recipient that “The Contractor shall provide the services for the base period of the contract,” but “base period” isn’t defined in the RFP. However, the contract does specify that there shall be “a firm fixed unit price for any contract line item number in the Base Year,” and therefore the obligations under any contract will continue for at least one year, but possibly longer (if renewed). Furthermore, the “Type of Solicitation” here is not “Sealed Bid (IFB),” but instead “Negotiated (RFP),” which means that the US Government officials who are “Soliciting” these offers will choose whom to request to present an offer; and, if two or more recipients are being approached and make an offer, then the US official will select the winner that he or she prefers, and won’t be required to accept the lowest-priced one, but can instead take some sort of kickback, as long as there is no evidence of having done that. It can easily be arranged. Furthermore, private arrangements bond the two parties, even if the arrangement is just a one-time deal, because neither party will want the private arrangement to be made public, and if ever it does become public, then both parties will be revealed as guilty; it’ll hurt both parties. Moreover, since any contract may be renewed, the offeror of the contract, which is the Embassy employee, holds the power to affect that — the length of term, and everything that’s associated with it, will be controlled by the Embassy’s side, and not by the contractor’s side. And no matter how brief a contract-term might be, and no matter how many non-Americans might be signing any particular type of contract during any given period of years, none of the private parties will have any motive to make public any kickback. Consequently, there is every motive to keep these arrangements private; and the Embassy employee will always be the more powerful one in any private arrangement that is made with any contractor.