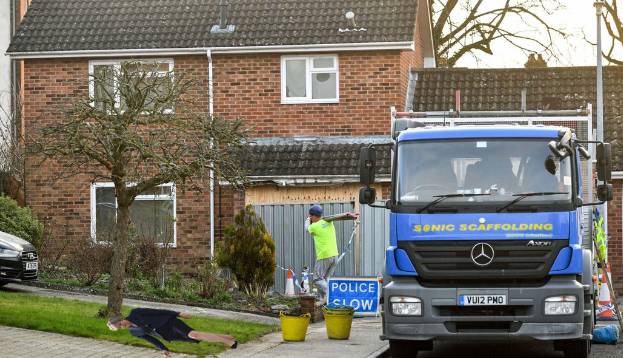 “I think it abundantly clear that what we have been told about what took place on 4th March in the beautiful city of Salisbury is not, in fact, true. It is clear that something else happened, and much of what we have seen since then has been theatre and an attempt to cover up what actually took place.”

Helmer is the longest serving foreign correspondent covering Russia. He published his fascinating memoirs in December of 2018. They are full of insights into what has really been going on in Moscow over the past 30 years. RI wrote about it here. He is the author of 12 books, 3 of them about Russia.

The British state broadcaster BBC and other media have disclosed that the Salisbury house (lead image) owned by Sergei Skripal is to be partially demolished and rebuilt over the next four months.

A Wiltshire Council notice to residents in the neighbourhood of the Skripal home is the source of the news reports. The January 4 notice, a media briefing by the Wiltshire Council, and a press release by a spokesman at the Ministry of Defence do not say how much of the house will be reconstructed. “We are working with the site owner, Wiltshire Council and other partners to ensure that the house will be fully repaired and returned to a fit state to live in,” the anonymous Defence Ministry official was quoted as saying by the Salisbury Journal.

The British Government, London and Wiltshire police, and media reports have claimed that a fast-acting, lethal nerve agent was administered to the handle of the front-door of the Skripal house eleven months ago, on March 4. The alleged attackers have been identified by Prime Minister Theresa May (lead image, left) as two Russians. No allegation nor evidence has been reported to date that they or their poison penetrated inside the Skripal residence.

Two senior Wiltshire Council officials, Tracy Daszkiewicz, Director of Public Health and Protection, and Alistair Cunningham, coordinator of the recovery programme, were asked to clarify how much of the Skripal house will be replaced. Replying today through spokesman David Perrett, they said “there are no plans to demolish the property at 47 Christie Miller Road. The roof and garage roof are being removed and replaced.”

Because the front-door handle was the sole identified site of the attack, and decontamination has been under way for eleven months, the two officials were asked to explain their reason for the reconstruction.

“Every decontamination site is different”, Perrett responded. “Each one has a tailored decontamination plan. As you would expect this site is more complex than others… we are taking a highly precautionary approach and that is why the clean-up work is so extensive and meticulous. It is vitally important we are thorough on all the sites so that local residents can be fully confident that each one is safe when returned to use.”

Perrett added: “In the more contaminated sites some hard surfaces might be removed.”

Angus Macpherson, the Wiltshire police commissioner, told the press on Monday  that Detective Sergeant Nick Bailey, who entered the Skripal house on the evening of the poison attack and who was hospitalized later for nerve agent exposure,  returned to active duty this week. Bailey has told the BBC he has “lost everything” in his house.

Commissioner Macpherson, together with Daszkiewicz and Cunningham, were asked to say if the Bailey house is also to be demolished and why. Through Perrett, they answered. “Sgt Bailey’s house has been fully cleaned. There are no plans to demolish this property.”

Sergei Skripal and his daughter Yulia fell ill in the centre of Salisbury town several hours after leaving their home in the afternoon of March 4. They did not return to the house before they were hospitalized. A BBC reconstruction of their departure and the alleged door-handle attack was published on November 22.

The BBC claims the door handle was sprayed with a nerve agent for “a matter of seconds”; and that minutes later Sergei Skripal touched the handle bare-handed, on his way out of the house. In the BBC reconstruction, Yulia Skripal was shown as wearing gloves and as not touching the door-handle.