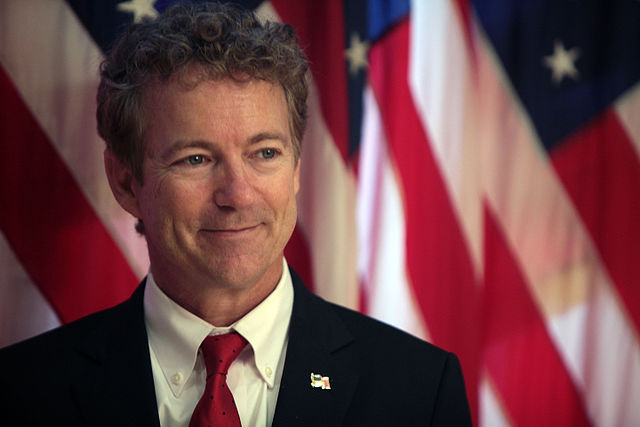 If Rand Paul is to be believed, President Trump is not going to cave into the establishment’s demands that we stay in Syria forever after four Americans were killed on Wednesday but is instead more committed than ever to leaving.

Sen. Rand Paul (R-KY), a leading ally of President Donald Trump, told reporters in a brief conference call after a meeting with the president on Wednesday that Trump is planning withdrawals of U.S. forces from Syria and Afghanistan and will instead reinvest U.S. resources wasted there in rebuilding the United States.

In Syria, U.S. armed forces have been fighting the Islamic State or ISIS, a terrorist group that once controlled significant territory and resources, but the administration insists that ISIS has been defeated. As such, Trump is moving to withdraw all U.S. forces from Syria.

In Afghanistan, U.S. troops have been at war there for nearly 18 years, since the Sept. 11, 2001, terrorist attacks, making it the longest war in U.S. history. While Paul was nonspecific on the details of the timeline and scope of withdrawal from Afghanistan, the senator from Kentucky said that President Trump did make clear to senators and national security officials on Wednesday he intends to end the war there too. Paul said:

I’ve just come from the White House and we had a great meeting there. I tweeted out that I’ve never been prouder of the president and I don’t say that lightly. I’m not the kind to just say something is really great if it’s not. I really am proud of the president for making an argument that no president in recent history has made and that is that we have been at war too long in too many places and that he’s really going to make a difference. This is the kind of stuff those of us who have seen the horror of war and see the horror of those who have lost limbs in war and war that has gone on and on and on. We live for the day that somebody will actually stand up and say ‘I’m going to change history.’ I think the president is that person—and I really am proud of him not only for saying that not only is he following through with his Syria policy but I really do think there will be changes in Afghanistan as well. If you look at the polling data for the American people, I think the American people are with the president and they’re tired of both parties who are unwilling to stand up and say enough is enough. It’s time to spend some of that money at home. He mentioned how much money we spent in Afghanistan on gas stations, luxury hotels, and this and that—our country suffers. We need to be able to spend that money here at home.

I have never been prouder of President Donald Trump. In today’s meeting, he stood up for a strong America and steadfastly opposed foreign wars. Putting America First means declaring victory in Afghanistan and Syria. President Trump is delivering on his promises.

Regarding the specifics of the withdrawal plans, Paul said he will allow the president to detail those for the nation but laid out how Trump has made clear both wars are coming to an end, and soon:

I think the president will have to characterize the specifics, but I think his general—the idea is we’re going to do things differently. We’re not going to stay forever. The Afghans will have to step up. The Afghans will need to begin fighting their own wars and protecting their country. It’s not that we’ll do nothing. I think the president still help them. I think we’ll still actually be there longer than I would like to be, but the president is willing to acknowledge that America’s longest war needs to come to a close and that we need to learn how to declare a victory. I can tell you with each successive conversation that I’ve had with him, I feel that he really is going to try to do something extraordinary for our country. We’ve been at war for so long and so many young men and women have died and so many have given up parts of their body. I think it’s a part of the president that a lot of people haven’t seen publicly, and that’s his concern for those he has met at Walter Reed… He takes that burden very personally that he is in charge and he is the one who now gets to decide whether we’re going to be in this forever or if we’re going to change course. And I think he’s going to change course. And I think he’s going to set his own. I don’t want to talk to the specifics though because I think he has to tell the country that, but I will tell you if you’ll look at his language in his tweets about ‘endless war’ and you hear him talk about how long this has gone on, I think you’re seeing one of the extraordinary things about how people couldn’t figure out how did Donald Trump get elected? Well, it would be because he doesn’t fit neatly in a box. He was a different kind of Republican who actually looked at the issues of war and said you know what? We ought to think of America first, and not spend so much everywhere all the time that really a lot of times just doesn’t work frankly.

Paul added that in addition to a major policy win for the president, the withdrawals from Syria and Afghanistan–ending both wars finally–are major political wins for him,as well, heading into his re-election in 2020.

Paul said when asked by Breitbart News about how important keeping these promises is for his re-election:

I think most people, most political pundits, still haven’t figured out how he won in 2016. I think he did win by being different. He got a lot of working class voters who understand that he wanted to and would stand up to foreign countries to make sure we get a better deal for this country, that he would make even our friends and allies pay more for their own defense and the day of everybody thinking that we were Uncle Sam and going to take care of their every want and wish, that those days were over. That’s also what he was saying with regard to war. He won because he said things—look he will defend America. He said in the meeting that he is for a stronger defense than anybody in the meeting ever imagined and that he will do whatever it takes to defend America but that he’s not going to fight forever or leave our troops in wars forever where it’s not really helping America.