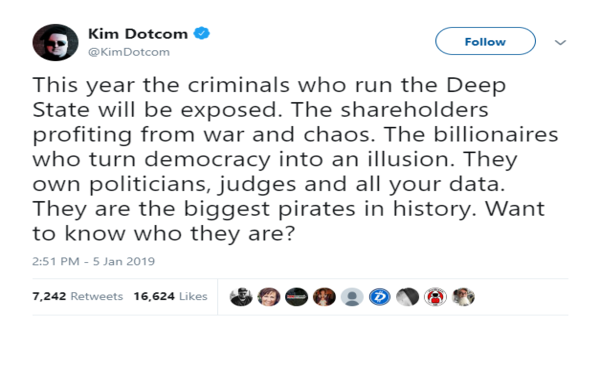 While Democrats continue to scream that a wall or a fence at our Southern border is bad for human rights, going so far as to allow the government to be closed down rather than give President Trump the money he’s asking for to build it, a quick look back to this July 25th of 2016 story over at My News 4 in Reno, Nevada proves to us just how big the Democratic hypocrites are, as videographer Mark Dice also clearly points out in the first video at the bottom of this story.

As was widely reported back in July of 2016, the Democratic National Committee actually had built a HUGE fence all around the Wells Fargo Arena in Philadelphia, Pennsylvania to keep members of their own political party out of the building where the ‘coronation‘ of ‘Queen Hillary‘ was taking place. So why would the same group now be fighting against a wall/fence that would keep dangerous criminals out of the country?

With Clinton crony David Brock of Media Matters fame recently penning this column for NBC News arguing that Democrats can’t allow Bernie Sanders supporters to poison another election, actually coming straight out and blaming Sanders voters for President Trump’s win over Hillary, it’s more clear now than ever who the ‘enemies of America within‘ are and their disdain for voters who don’t toe the party line on the left is almost as bad as their hatred of ‘deplorables‘.

And as we’ll see detailed within this ANP story, part 1 of 2, nothing less than the very future of America is now at stake with the globalists going all-in in their attempts to take down President Trump and his America-1st agenda, nothing less than treasonous sedition, while they attempt to pit brother against brother, neighbor against neighbor and Christians against other Christians here in America as we’ll read below in this story from Tom Horn’s book “Blood on the Altar: The Coming War Between Christian vs Christian“.

(ANP: We’ve added a live video link at the bottom of this story to President Trump’s 9 pm ‘Border Security’ address tonight for those who’d like to watch it live at ANP.) 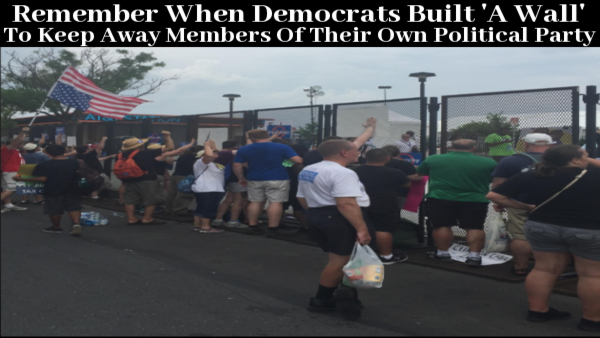 With Brock’s remarks and the Democrats fence proving once again and beyond a shadow of a doubt just how little the ‘establishment’thinks of the ‘little people’, whether we be on the left or the right, we turn our eyes to this must-read new story by Mike Adams over at Natural News in which he argues it’s time for President Trump to declare a national emergency, build the wall and most importantly, round up the traitors who long ago sold out America.


Nothing less than the future of our Republic is at stake Adams warns while asking that all awakened Americans prepare to assist President Trump in defending America. Warning that should we the American people fail in this endeavor to take down the global terrorists within the US who sold America out to the highest bidders, nothing less than an authoritarian government awaits us on the other side, a government which has proven to hate everybody who is ‘not them‘.

And oh the hypocrites the Democrats are with Barack Obama having a huge wall around his home, as do most other Congressional reps as well. In fact, should these open-borders-pushing government public servants think open borders really are good, we challenge each and every one of them at this moment to OPEN UP THEIR OWN HOMES to anybody who wants to come in. Think there’ll be any takers? As Adams reports:

It’s time for President Trump to declare a national emergency. This is the first necessary step in defending America against the domestic enemies and enemy combatants operating within.

Immediately after declaring a national emergency, President Trump must deploy the United States military to build and man the border wall. (Yes, I said “man.”)

It’s time to activate the military police and hand them a list of the deep state traitors who have attempted to carry out a treasonous political coup rooted in illegal government spying under President Obama, the falsification of “evidence” used to deceive the FISA court, witness tampering by Robert Mueller, illegal leaks by James Comey, official corruption by Hillary Clinton, and multiple acts of treason against America approved by Obama and dutifully carried out by Eric Holder and Loretta Lynch.

Arrest the deep state traitors, indict them for crimes against America and prosecute them.

Defend America or we lose America. 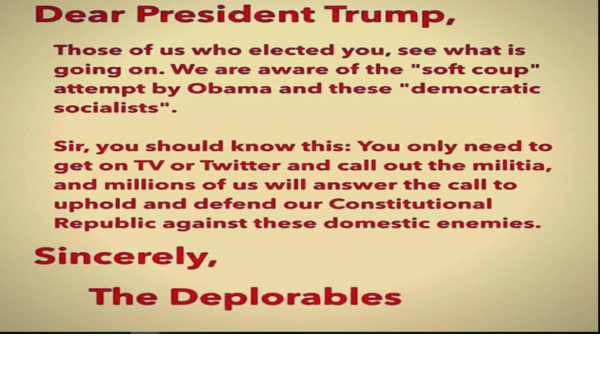 In the photograph seen above which was posted to the twitter page of President Trump’s recent announcement that he will be doing a prime-time address to the nation on Tuesday night on border security and the beliefs of many that he’ll declare a national emergency in an attempt to get a border wall finally built, we see one man’s thoughts on the deep state coup attempt against Trump that has been ongoing now for the first full two years of his Presidency.

With that person’s thoughts echoing the thoughts of Mike Adams that America and our Constitutional Republic are in grave danger and Patriots should be ready to defend our Republic and Constitution against domestic enemies of America within, this January 6th story over at Zero Hedge hints we may soon finally learn the names of everybody who sold out America with hacker Kim Dotcom claiming “the criminals who run the deep state will be exposed” while hinting at a new round of leaks.

While Kim also claimed back in February of 2018 that he could assure us that the DNC ‘hack’ wasn’t even a ‘hack’ and he knew who did it, the most disturbing aspect of that February 2018 tweet was Kim claiming that his attorney had contacted Robert Mueller about the hack not once but twice BUT he never heard back from Mueller.