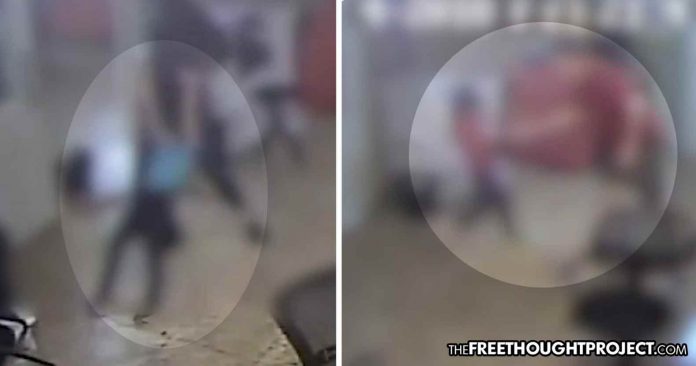 Children that appear to be no bigger than toddlers are dragged, beaten, and thrown around like animals in an Arizona migrant facility.

Youngstown, AZ — Terrifying videos have been released this month showing the level of abuse endured by migrant children at the hands of government contractors. Children that appear to be no bigger than toddlers are dragged, beaten, and thrown around like animals.

Although the videos were recorded in September, they have just been publicly released as part of a Freedom of Information Act request. The Arizona Republic obtained the videos from the Arizona Department of Health Services under state public-records law.

As The Free Thought Project has reported, Southwest Key is a non-profit organization with a federal contract to run the detention facilities to house immigrant children who have been separated from their parents or arrived in the U.S. as unaccompanied minors.

In June, we reported Southwest Key‘s detention facility in Brownsville, TX had denied entry to U.S. Senator Jeff Merkley (D-OR). Then, in August, Southwest Key showed up on our radar again for hiring numerous individuals who have already been convicted of molesting kids, or who now stand accused of sexually abusing the teens and children they were supposed to be protecting.

The video below shows, at least in part, how much abuse these children endured due to these irresponsible hiring practices.

One surveillance video shows a male staffer dragging and pulling a boy into a room, then slapping him and pushing him against a wall. The staffer then recoils when it appears the child strikes him. The staffer then leaves the room, and the boy is seen retreating to a corner, then pounding on the window in a door to an adjacent room.

A second video shows a female staffer hustling a child through a conference room, then dragging the child into an adjoining room because the child had lain down and tried to block the doorway with their legs. It is unclear from the edited video if the child is a boy or girl.

As that is happening, another staffer pulls a child with extended arms into the same room. All the while, workers doing other tasks in the conference room go about their business, with one seen adjusting her ponytail.

A third video shows a disrupted classroom setting, but the exact actions areunclear from the blurry image.

The state agency blurred the videos to protect the privacy of the children depicted.

Despite the horrific abuse seen in the video below, none of the staff faced any criminal charges.

“(T)he investigation determined that while physical force and restraint techniques were used against these minor children, these actions did not rise to the level of criminal charges,” Sgt. Joaquin Enriquez, with the  Maricopa County Sheriff’s Office said in a statement on Friday.

According to the sheriff’s office, the level of “restraint techniques” shown in the video is permitted by state law.

While the abuse in the video above is certainly despicable, many of the children under the care of Southwest Key faced far worse treatment.

As TFTP reported in August, an HIV-positive man, who was a youth worker responsible for caring for immigrant children in Phoenix, was charged with sexually abusing at least eight teenage boys detained over a one-year period between 2016 and 2017.

Levian Pacheco was accused of performing sex acts on two boys who were 15 to 17 years of age at the time they were assaulted. According to Time, several of the boys have elected to be tested for the virus as a result.