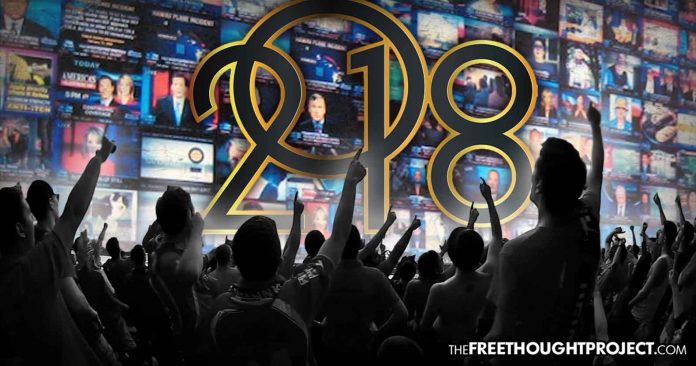 As the clock gets ready to hit midnight, rest assured that the information controllers within the mainstream media and the establishment are preparing an entire year’s worth of propaganda and misinformation to keep you in the dark about issues that really matter in 2019.

As divisive partisan rubbish filled the airways to keep Americans divided in 2018, many very important stories were buried under a sea of misinformation — much of which was likely deliberate.

The Free Thought Project has compiled a list of five of the biggest stories the mainstream media ignored or swept under the rug in 2018.

Kicking off the list at number one is an issue that we watched play out all December long as flags across the country sat at half mass to honor war criminal and mass murder George H.W. Bush. Although countless hours of coverage were devoted to honoring Bush, not a single mainstream media outlet reported on his crimes during his presidency.

Bush was a man “of the highest character,” said his son and fellow former president, George W. Bush. “He loved America and served with character, class, and integrity,” tweeted former U.S. Attorney and #Resistance icon Preet Bharara. According to Barack Obama, Bush’s life was “a testament to the notion that public service is a noble, joyous calling. And he did tremendous good along the journey.” Apple boss Tim Cook even weighed in and said: “We have lost a great American.”

While the establishment praised Bush for opening charities and his legacy as president, the media conveniently ignored the fact that Dubya’s daddy slaughtered women and children in Iraq in the 90’s.

Just like his criminal son, this “great American” lied about weapons of mass destruction to invade and occupy Iraq. During his presidency, he committed war crimes, dropping 88,500 tons of bombs on Iraq which resulted in the utter slaughter of thousands of innocent civilians. According to Human Rights Watch, these attacks were “a serious violation of the laws of war.”

It was George Bush Snr. who ordered the bombing of the “Highway of Death” in 1991. The death toll remains unknown. Robert Fisk, the journalist, said he “lost count of the Iraqi corpses crammed into the smoldering wreckage or slumped face down in the sand”. pic.twitter.com/Fj8cnC4aAi

But fret not, free world, this great American “served” his country proudly and is a hero and advocate of freedom—according to your television.

2. The yellow vests protests, their success, and the fact that police joined in

A grassroots movement made up of citizens who have become fed up with the political establishment in France has been growing since early November and it was largely downplayed by Western media. The movement, known as “gilets jaunes” or “yellow vests” began as an anti-tax protest but then merged folks from the left and the right into a much broader anti-government protest.

Because populist movements reject the left/right paradigm, they are far stronger as they bring in people from all over the spectrum. It also makes them quite rare and what we are witnessing with the yellow vest movement is approaching historical levels of populism.

First of all, the fact that populist movements are directed against the political elite as a whole, without making a distinction, whether it is right or left-wing, is striking. This is the ‘uprising of the periphery of society against its center’.

As the yellow vests protests took place across France, the government slowly acquiesced to the demands of citizens. The protest was so successful that French Prime Minister Edouard Philippe announced a six-month suspension of the fuel tax which triggered the unrest.

Also, police officers were seen in multiple videos joining the protesters. They even threatened a protest of their own after they found that the French government was ripping them off as well.

3. The federal government acknowledged the possibility that explosives were used to destroy WTCs on 9/11

The Lawyers’ Committee for 9/11 Inquiry successfully submitted a petition to the federal government demanding that the U.S. Attorney present to a Special Grand Jury extensive evidence of yet-to-be-prosecuted federal crimes relating to the destruction of three World Trade Center Towers on 9/11 (WTC1, WTC2 and WTC7).

After waiting months for the reply, the U.S. Attorney responded in a letter, noting that they will comply with the law. According to the report:

The Lawyers’ Committee’s April 10th 52-page original Petition was accompanied by 57 exhibits and presented extensive evidence that explosives were used to destroy three WTC buildings. That evidence included independent scientific laboratory analysis of WTC dust samples showing the presence of high-tech explosives and/or incendiaries; numerous first-hand reports by First Responders of explosions at the WTC on 9/11; expert analysis of seismic evidence that explosions occurred at the WTC towers on 9/11 prior to the airplane impacts and prior to the building collapses; and expert analysis by architects, engineers, and scientists concluding that the rapid onset symmetrical near-free-fall acceleration collapse of three WTC high rise buildings on 9/11 exhibited the key characteristics of controlled demolition.

For months after the shooting, the LVMPD refused to release any information. Only after they fought the release all the way to the state supreme court, and were handed down a ruling forcing them to release information, did they ever budge.

Luckily, there are outlets like the Las Vegas Review-Journal who have been persistent in scrubbing the details of this case. However, because the mainstream media no longer reports on this information, it essentially gets buried upon its release.