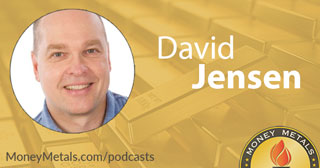 Coming up we’ll hear one of the more important interviews we’ve ever done on the broken nature of the precious metals’ futures exchanges, and what might be the driving force that ultimately destroys the confidence in these markets, paving the way to true price discovery. Mining analyst and precious metals expert David Jensen joins me to talk about how palladium might just be the straw that breaks the back of the paper market. Don’t miss this must-hear interview, coming up after this week’s market update.

As the government shutdown persists, and a declaration of national emergency by President Donald Trump looms, financial markets are unfazed. The Dow Jones Industrials have swung approximately 500 points higher so far this week.

However, the U.S. Dollar Index did hit a 3-month low on Wednesday. That helped boost oil prices in a big way. Crude climbed 10% to $53 a barrel.

The price action in precious metal markets is more subdued. Gold shows a modest gain of 0.4% this week to bring spot prices to $1,291 per ounce. The yellow metal flirted with the $1,300 level last Friday. More backing and filling may be needed before the market is ready to push through that resistance.

Metals markets don’t appear to be getting much of a boost due to investor fears over the government shutdown. So far, the standoff between Trump and Democrat leaders has been perceived by investors as more of a sideshow than a genuine threat to the economy.

But the longer the shutdown drags on without a resolution, the more restless those furloughed government employees will become about the delays they face in being paid. People who are dependent on government programs such as food stamps may also start getting nervous. The government says funding could run out for some welfare programs after next month if Congress and the White House fail to come to terms on a deal to reopen the federal bureaucracy.

It’s unlikely the government will actually stop paying out benefits as a result of the present political stalemate. But the risk of a default on government promises will grow in the years to come as the government’s financial condition steadily worsens. A deeply divided and polarized political system that cannot find the will or the way to compromise on a modest allocation to border fencing cannot be expected to get a handle on the rapidly growing $22 trillion national debt.

The masses have been placated in recent years by a strong stock market, relatively tame inflation, and a seemingly strong economy. But the good times won’t last forever. They may even now be behind us. The Federal Reserve is concerned enough about a potential bear market in stocks and slowdown in the economy that is likely to end its rate-hiking campaign.

Elsewhere in the world, the natives are growing restless. France is now on the brink of revolution. Its Yellow Vest protestors refuse to back down until unpopular French leader Emmanuel Macron steps down from power.

Yellow Vest leaders are now calling for organized bank runs. Here’s a brief rundown of the situation from an independent geopolitical analyst known on the internet as Black Pigeon Speaks:

Black Pigeon Speaks: The fortunes of President Emmanuel Macron have gone from dim to bleak. We are now more than eight weeks into what could be called an anti-government rebellion, by what have been dubbed the Yellow Vest Movement. Reports are now emerging that the Yellow Vest Movement has the banks squarely in their sights, and in what is perhaps the first ever planned and voluntary bank run. The idea was first floated on social media as a legal and nonviolent way to rebel against the state. The post in part read, “We all know that the powers of the country are not in the hands of the government but in those of the banks. If the banks weaken, the state weakens immediately.”

The fractional reserve banking system is inherently vulnerable to an abnormally large scale of withdrawals. At any given time, banks are only able to pay out a fraction of what customers hold in their accounts as deposits. In effect, account balances represent nothing more than unsecured claims on banks that are technically insolvent.

In a financial crisis, the banking system could become functionally insolvent – meaning customers would be unable to withdraw funds. They might even find themselves in the position of having to “bail in” failing banks by taking losses on their accounts. This happened a few years ago during the financial panic that hit Cyprus.

Cypriot account holders learned a tough lesson in counterparty risk. Investors can mitigate that risk by holding assets outside of the banking system and not depending on promises from bankers, brokers, or politicians. Assets that entail zero counterparty risk include physical gold and silver bullion products that you can hold in your hand and own free and clear.

Coming up now… our discussion on another type of fractional reserve system, that being the metals futures markets. Yes, it’s looking like the futures markets are losing some control over the pricing of the metals. So, let’s get right to this week’s exclusive interview.

Mike Gleason: It is my privilege now to welcome in David Jensen of Jensen Strategic, a highly-studied mining analyst and precious metals expert with close to two decades of experience in the mining industry, and it’s great to have him on.

David, thanks so much for the time today and nice to finally talk to you.

David Jensen: My pleasure, Mike. It’s good to touch base with you.

Mike Gleason: Well, David, you’ve been closely following the palladium market, and that’s where I wanted to focus much of our conversation today, because that’s obviously where most of the fireworks are happening in the metals these days. Now, for the most part over the last few years, gold and silver prices have been bouncing around and have been basically in trading ranges. But palladium has been a different story, however. The metal has been climbing steadily for most of the past three years. Things got off to a rough start in 2018, but since the middle of August, prices have rallied more than 30% and we’re back to all-time highs.

You have been watching the palladium market closely and you have some important insights. So, let’s get started by talking a little bit about palladium supply. You have some background in mining and metals. Can you first talk, briefly, about where palladium is produced and why supply could become a serious issue?

And of that six and a half million ounces, about 40% comes from Russia and about another 40% comes from South Africa. And then the other nations, Canada, the United States and other places fill out the last 20%. So it’s a very concentrated supply from two primary sources.

Mike Gleason: The market for palladium is relatively tiny compared to gold and silver, as you just laid out. But what’s happening there could have major implications for precious metals markets generally. The bullion banks have a bad habit of selling vast amounts of paper metal that will essentially create fresh new contracts for any buyer who shows up wanting one, sopping almost any amount of demand without prices being forced higher, as many would expect. They never seem to get called on it, but the bullion markets are essentially fractional reserve, and the fraction of physical metal backing all of this paper seems to just keep diminishing. However, the palladium market may represent a serious problem for the bullion banks. If you would, explain what a palladium lease is, what sorts of people or institutions lease metal, and why.

David Jensen: Okay. Well, the leasing of metal is typically a stop-gap measure to secure physical metal if you can’t get it from a refinery or from a mining supply source. So, it’s usually a stop-gap measure. And we’ve seen that leasing cost … and by the way, the leasing rate is a percentage and has to be paid with metal, not with fiat money or paper money at the end of the lease. And because you have to store and insure precious metals, typically when the market is flush, you see a negative rate so that the holders of the metal are actually paying you to take the metal off their hands.

And what we’ve seen now is, over the last, oh about 18 months, is that the palladium has gone from a negative lease rate. It spiked a couple of weeks ago to about 30% for a one month lease. And it’s around 21% today. So, what that signals to us: it signals that you can’t get adequate physical metal in the market right now and that there’s a dearth of supply.

Now, that shortage has not been quick to arise. The CEO of Johnson Matthey, which is one of the world’s largest refiners of Platinum Group Metals, he warned the market in 2017. He said that there had been a decade of ingrained or structural deficit where they had burnt down the above ground inventories through a supply deficit. And he said that the stockpiles are not all gone now, but if we continue along this path, that they certainly will be. And sure enough, now we see these very, very large lease rates signaling that there’s a real problem with supply.