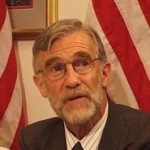 In his efforts to uncover the Iran-Contra plot and the machinations surrounding Russia-gate, Bob Parry was in the forefront of journalists exposing the inner workings of the Deep State, recalls Ray McGovern during our Winter Fund Drive.

A year ago yesterday, it became fully clear what was behind the feverish attempt by our intelligence agencies and their mainstream media accomplices to emasculate President Donald Trump with the Russia-gate trope.

It turned out that the objective was not only to delegitimize Trump and make it impossible for him to move toward a more decent relationship with Russia.

On December 12, 2017, it became manifestly clear that it was not only the usual suspects — the Military-Industrial-Congressional-Intelligence-Media-Academia-Think-Tank Complex, namely, the Boeings, Lockheeds, and Raytheons profiteering on high tension with Russia; not only greedy members of Congress upon whom defense contractors lavish some of their profits; not only the TV corporations controlled by those same contractors; and not only the Democrats desperately searching for a way to explain how Hillary Clinton could have lost to the buffoon we now have in the White House.

No, it was deeper than that. It turns out a huge part of the motivation behind Russia-gate was to hide how the Department of Justice, FBI, and CIA (affectionately known as the Deep State) — with their co-opted “assets” in the media — interfered in the 2016 election in a gross attempt to make sure Trump did not win.

This would become crystal clear, even to cub reporters, when the text exchanges between senior FBI officials Peter Strzok and girlfriend Lisa Page were released exactly a year ago. Typically, readers of The New York Times the following day would altogether miss the importance of the text-exchanges.

Readers of Robert Parry’s article on December 13, 2017, “The Foundering Russia-gate ‘Scandal,” would be gently led to understand the importance of this critical extra dimension explaining the the media-cum-anonymous-intelligence-sources frenzied effort to push the prevailing Russia-gate narrative, and — and how captivated and unprofessional the mainstream media had become.

Please give to our end-of-year fund drive by clicking Donate.

Bob Parry did not call me frequently to compare notes, but he did call on Dec. 12, 2017 for a sanity check on the release of the Strzok-Page texts. FBI Agent Peter Strzok interviewed Hillary Clinton on her servers (and led that investigation); he was the hand-picked FBI agent who took part in the Jan 2017 light-weight intelligence “assessment” that blamed Russia for the 2016 election result, and he was on special counsel Robert Mueller’s staff investigating alleged Russian interference. Bob and I agreed on the texts’ significance, and I was tempted to volunteer a draft to appear the next day. But it was clear that Bob wanted to take the lead, and it would turn out to be his last substantive piece. He had already laid the groundwork with three articles earlier that month. (All three are worth reading again. Here are the links. 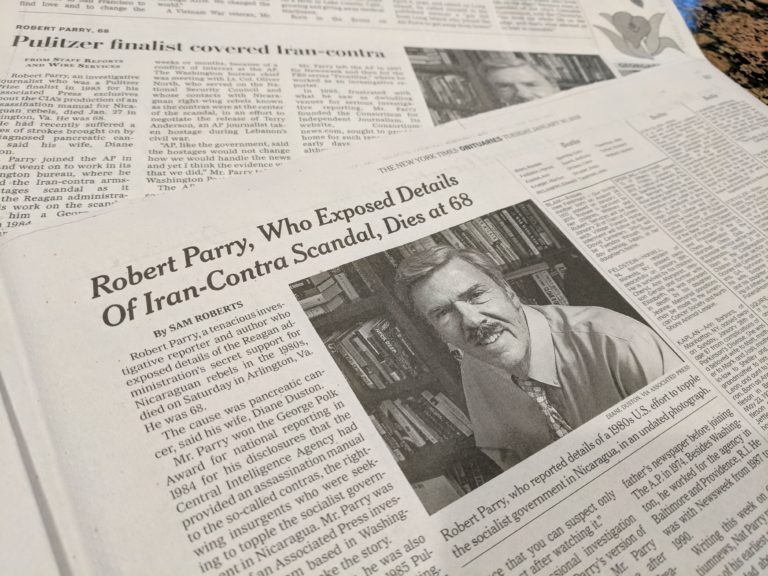 Here’s how Bob began his article on the Strzok-Page bombshell. (Not a fragment of it seemed to impact mainstream media.):

“The disclosure of fiercely anti-Trump text messages between two romantically involved senior FBI officials who played key roles in the early Russia-gate inquiry has turned the supposed Russian-election-meddling “scandal” into its own scandal, by providing evidence that some government investigators saw it as their duty to block or destroy Donald Trump’s presidency.

“As much as the U.S. mainstream media has mocked the idea that an American ‘deep state’ exists and that it has maneuvered to remove Trump from office, the text messages between senior FBI counterintelligence official Peter Strzok and senior FBI lawyer Lisa Page reveal how two high-ranking members of the government’s intelligence/legal bureaucracy saw their role as protecting the United States from an election that might elevate to the presidency someone as unfit as Trump.”

Fast forwarding just two weeks, Bob had a stroke on Christmas Eve, which seriously affected his eyesight. By New Year’s Eve 2017, though, he was able to “apologize” (typical Bob) to Consortium News readers for not filing for two weeks.

In January, he had additional strokes. When I visited him in the hospital, he was not himself. What is indelible in my memory, though, is the way he kept repeating from his hospital bed: “It’s too much; it’s just too much, too much.”

What was too much?

Since Bob told me how hard he had to struggle, with impaired vision, to put together his Dec. 31 piece, and since what he wrote throws such light on Bob and the prostitution of the profession he loved so much, I include a few excerpts below. (Forgive me, but I cannot, for the life of me, pare them down further.)

These paragraphs from Bob are required reading for those who want to have a some clue as to what has been going on in Washington, and the Faustian bargain Strzok — sorry, I mean struck — between the media and the Deep State. Here’s what Bob, clear-eyed, despite fuzzy eyesight, wrote:

“On Christmas Eve, I suffered a stroke that has affected my eyesight (especially my reading and thus my writing) although apparently not much else. The doctors have also been working to figure out exactly what happened since I have never had high blood pressure, I never smoked, and my recent physical found nothing out of the ordinary. Perhaps my personal slogan that ‘every day’s a work day’ had something to do with this.

“Perhaps, too, the unrelenting ugliness that has become Official Washington and national journalism was a factor. It seems that since I arrived in Washington in 1977 as a correspondent for The Associated Press, the nastiness of American democracy and journalism has gone from bad to worse. …

“More and more I would encounter policymakers, activists and, yes, journalists who cared less about a careful evaluation of the facts and logic and more about achieving a pre-ordained geopolitical result –and this loss of objective standards reached deeply into the most prestigious halls of American media. This perversion of principles –twisting information to fit a desired conclusion – became the modus vivendi of American politics and journalism. And those of us who insisted on defending the journalistic principles of skepticism and
evenhandedness were increasingly shunned by our colleagues … Everything became ‘information warfare.’ …

“The demonization of Russian President Vladimir Putin and Russia is just the most dangerous feature of this propaganda process – and this is where the neocons and the liberal interventionists most significantly come together. The U.S. media’s approach to Russia is now virtually 100 percent propaganda. Does any sentient human being read the New York Times’ or the Washington Post’s coverage of Russia and think that he or she is getting a neutral or unbiased treatment of the facts? … The American people and the West in general are carefully shielded from hearing the ‘other side of the story.’ Indeed to even suggest that there is another side to the story makes you a ‘Putin apologist’ or ‘Kremlin stooge.’

“Western journalists now apparently see it as their patriotic duty to hide key facts that otherwise would undermine the demonizing of Putin and Russia. Ironically, many ‘liberals’ who cut their teeth on skepticism about the Cold War and the bogus justifications for the Vietnam War now insist that we must all accept whatever the U.S. intelligence community feeds us, even if we’re told to accept the assertions on faith. …

“The hatred of Trump and Putin was so intense that old-fashioned rules of journalism and fairness were brushed aside. On a personal note, I faced harsh criticism even from friends of many years for refusing to enlist in the anti-Trump ‘Resistance.’ The argument was that Trump was such a unique threat to America and the world that I should join in finding any justification for his ouster. Some people saw my insistence on the same journalistic standards that I had always employed somehow a betrayal.

“Other people, including senior editors across the mainstream media, began to treat the unproven Russia-gate allegations as flat fact. No skepticism was tolerated and mentioning the obvious bias among the never-Trumpers inside the FBI, Justice Department and intelligence community was decried as an attack on the integrity of the U.S. government’s institutions. Anti-Trump ‘progressives’ were posturing as the true patriots because of their now unquestioning acceptance of the evidence-free proclamations of the U.S. intelligence and law enforcement agencies.

“Hatred of Trump had become like some invasion of the body snatchers –or perhaps many of my journalistic colleagues had never believed in the principles of journalism that I had embraced throughout my adult life. To me, journalism wasn’t just a cover for political activism; it was a commitment to the American people and the world to tell important news stories as fully and fairly as I could; not to slant the ‘facts’ to ‘get’ some ‘bad’ political leader or ‘guide’ the public
in some desired direction.”

Robert Parry, who exposed Deep State skullduggery in the Iran-Contra affair, died on January 27, 2018. Our corrupt media, though, live on in infamy. Strokes and pancreatic cancer were the cause. But I think Bob was also a casualty of the stress caused by the Faustian media/Deep State bargain. It was just “too much.”