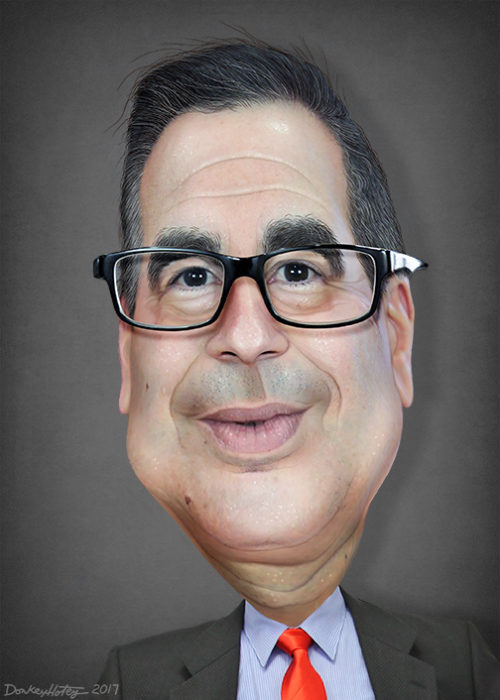 Before Trump was even inaugurated, I said he was clearly draining the swamp directly into the White House. That was obvious as soon as he nominated a Goldman-Sachs roster to fill all the financial cabinet positions. Some wishfully said he was playing 4-D chess by keeping his enemies close. I called baloney. He was simply being Sached. One of those from the Goldman roster was Steven Mnuchin.

Today we got a prime example of how the mobsters are going to spin the current market train wreck for their own gain … and they will probably succeed. Munchkin, as I prefer to call him, because he lives on Goldman’s sacks of gold, stolen pavers from the yellow-brick road

… has weighed and measured the recent destruction that put the Dow Jones Industrial Average on track for its worst December since 1931, and he appears to have drawn his own conclusions as to the impetus. Mnuchin during a Tuesday interview with Bloomberg News in Washington said that the effect of the financial-crisis-era Volcker rule and high-frequency trading have combined to sap liquidity in the market and insert an unprecedented measure of volatility in assets. (MarketWatch)

Yeah, that makes sense! It couldn’t possibly be that the Federal Reserve, by extracting $50 billion from the nation’s money supply every month, is draining liquidity. No, draining tens of billions of dollars out of official money supply couldn’t possibly be the liquidity drain. It MUST be the Volcker rule — a banking regulation that Bankster Munchkin hates, that is the problem.

WHAT A SHAMELESS CROOK! Naturally, he isn’t going to blame himself for the horrible tax breaks he helped engineer that are causing the federal government to suck up all available credit in order to fund the gap. Nor is he going to blame his squiddish friends at the Fed for sucking money out of the economy like the Titanic sucked water out of the sea and into its own bilge. Instead, the whole problem is that we kept a tiny bit or regulation inside of the shell that’s left of the new banking regulations. If only we had stripped that out, too, the banksters could be saving us now. We tied their hands.

The Volcker rule was put in place after the last financial crisis to limit banks from gambling with their depositors money (technically it was to keep them from gambling their own money, but try to find the difference in terms of where it leaves your security). Sure that’s why the stock market is now crashing. It’s because banks cannot gamble as much as they would like to, although they still gamble plenty.

Never mind that the cause-and-effect of the Fed’s Great Recovery Rewind tracks perfectly with the breakup action of the stock market, while Munchkin cannot show any evidence that connects the autumn failure of the stock market to the Volcker rule, nor the previous nose-dive in January through February. The Volcker rule did not kick in on January 26th when the stock market took its first big jolt. What happened then was the Fed doubled its rewind speed. The Volcker rule did not change this autumn when the market again fell to pieces. What happened then was the Fed’s rewind finally got up to full speed. He makes this completely absurd connection because he hates the Volcker rule and is looking to use the stock market’s failure as a way to get rid of the rule. He doesn’t even attempt to connect the dots. Just proclaim it, and it’s a new fact to feed the mainstream media. From the media’s point of view, it must be a fact because they got it straight from the resident expert.

I have always said the reason I predict the timing of events like these and then make a big noise about it when the they happen exactly as predicted is to stand against nonsense like this. I KNOW that the banksters will leap in when things crash to find anything to blame but themselves. They will say, “You couldn’t see something like this coming.” Yes, you could, and how it would come and when was recorded here in advance. They will say, this is due to this cause particular cause, but it was recorded here in advance that a certain other cause that was already scheduled by the Fed would be the thing that would cause this event at this time. So, who are you going to believe?

Sadly, the answer is that most people will believe the person with the big reputation.

However, if you can predict the effect that will precipitate from a particular cause; then the cause happens and the effect immediately ensues, there ought to be good reason for people to listen to that explanation. The worst part is that, if they do not listen, then the cycle will repeat … again (for this is not just the second lap we are about to go into).

So, I predicted the market would crash in January (which turned into the worst one-day point-drop in Dow history and which left us in a year of stock turmoil) and that it would, then, take its second big leg down in summer. (Although the early summer breakup of the FAANGs happened right on schedule, they didn’t start sucking the market down until fall, which clouds the issue slightly.) Why early summer? Because that was when the Fed was making another increase in its rewind rate. (Why not Spring when the Fed also made an increaser in its rewind speed? Because, I said, the market would be in the midst of a  big rally fueled by the Trump tax breaks and a dead-cat bounce from the January jolt.) That should make it clear that one can see in advance that the great sucking sound of liquidity going down the drain is the Fed’s Great Recovery Rewind in action. (Yet, the famous fakers of false facts like Munchkin cannot even see that in hindsight.)

Even in giving my summer timing for the second leg down, I stated in several articles that summer would be nothing compared to what would come in the fall when the Fed hit full Great Recovery Rewind speed. That, I said, would start cataclysmic failure, while I referred to the summer as the appearance of major cracks. (And I think the busting off of the five stocks that relentlessly led the bull market up its ramp for nearly ten years is a pretty major crack! Even if the rest of the market waited until fall to start to fall with them)

Yet, it is Mnuchin’s explanation that gets all the coverage on Bloomberg and MarketWatch, not mine. Mine is a small voice, and that’s why I need you to help me keep it alive. Someone has to speak out against the establishment because the Mainstream media certainly isn’t going to, but I can’t keep it up without some support. The White House isn’t going to say it. The Federal Reserve isn’t going to.

Ah, but there is no honor among thieves:

Fed Gov. Lael Brainard in a speech earlier this month said … in contrast to President Donald Trump’s Treasury secretary … the post-crisis banking laws have not contributed to liquidity problems.

He only says that because he’s got other things to blame it on, not because he recognizes the true cause. You see, it couldn’t possibly be that the Fed’s Great Recovery Rewind is popping the Everything Bubble for the simple common-sense reason that the Fed is doing the exact opposite of what it did to inflate the bubble in the first place. I inflated the bubble in stocks to, as the Fed said, “create a wealth effect.” Guess what? You do the reverse, you get a reverse wealth effect. Should be easy to see that is how that will turn out. We are simply going, as I have maintained from the start of this blog seven years ago, right back into the Great Recession because the Fed’s “unwind” will rewind us back to where we started going down this road.

The Fed, of course, won’t get that far into their rewind before everything is crashing everywhere and they have to stop, but I’ve always maintained that, by the time they figure that out, the downward momentum will be too great and it will be too late to arrest the fall. They are incapable of learning from their mistakes, no matter how big the losses to everyone, because it can never occur to them they are wrong from the very outset! So, times like the present market breakup just become an excuse to ditch one more banking regulation. “If you just allowed us a freer hand we’d be able to solve these problems.”

All I can say is, “Thank God the market fell off another cliff today as soon as the Fed came out with its interest rate announcement” because that drums the point that the market’s moves are all about the Fed’s actions, not about some nefarious banking rule. Volcker did nothing today, but the market fell off a cliff the instant the Fed stayed the course on its unwind, took a dead-cat bounce off a ledge and then fell as fast as it could all the way to the market’s close.

Regardless, the point will be lost on the Munchkins of this world, which includes everyone who sits on the Fed’s FOMC. The market is drumming them on the head today, and they still don’t get it. That is why I have always maintained, this wreck will happen at this time because they’ll never identify themselves or their own actions as the cause. Human ego prevents that. They have committed themselves to a school of thought all of their careers, and it will never occur to them that their entire way of thinking is flawed. It is why they did not see the Great Recession coming. It is why they always tighten until they cause recession. The few in the Fed who do get it, won’t do so in time.

Not surprisingly, to me anyway, today’s move by the Fed caused longer-term interest rates to fall by creating concerns of recession, taking the yield curve (the ratio between short-term interest rates and long-term rates) deeper into inversion — the stage it almost always enters before a recession, making the yield curve one of the most-watched make-or-break gauges of impending recession. The Fed is, as it always does, tightening right into recession. Fed chairs have demonstrated in the past (Ben Burn-the-banky) that they can be standing right in the middle of a recession and still tell the world they see no recession anywhere in sight, even when it is the biggest recession in the lifetimes of most people living and even when the Great Depression was the subject of their doctoral thesis.