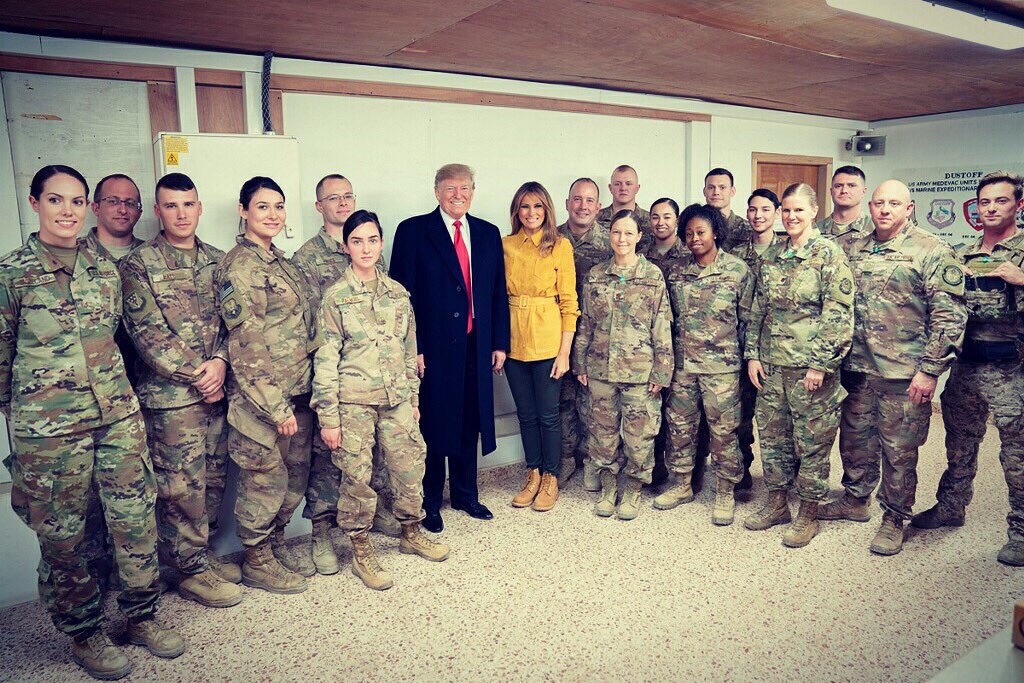 President Donald Trump reiterated his commitment to pull out of Syria while visiting our troops in Iraq on Wednesday saying the US “cannot continue to be the policeman of the world.”

“I will tell you that I had some very good talks with President Erdogan, who wants to knock [ISIS] out also,” Trump said. “And he’ll do it. And others will do it, too, because we’re in their region; they should be really sharing the burden of cost, and they’re not.”

“So these people are going to have to start doing a lot of their own work, and they’re going to have to start paying for it, because the United States cannot continue to be the policeman of the world. We don’t want to do that. We want to protect our country. These people want to protect our country. They’ve been here a long time.”

Trump also said his mission in Syria was not nation building.

“I made it clear from the beginning that our mission in Syria was to strip ISIS of its military strongholds; we’re not nation building,” Trump said. “Rebuilding Syria will require a political solution. And it’s a solution that should be paid for by its very rich neighboring countries, not the United States. Let them pay for it. And they will. They will.”

Nonetheless, Trump said he has no plans to pull out of Iraq and may use it to strike ISIS in Syria and “watch over Iran.”

Asked whether he has plans to pull forces out of Iraq, Trump responded: “No plans at all, no. In fact, we could use this as a base if we wanted to do something in Syria. If — I will say this, if you take ISIS and if we see something happening with ISIS that we don’t like, we can hit them so fast and so hard, they won’t — they really won’t know what the hell happened.”

Our presence in Syria was not open-ended, and it was never intended to be permanent. Eight years ago, we went there for three months, and we never left. But now we’re doing it right, and we’re going to finish it off.

The men and women who serve are entitled to clear objectives, and the confidence that when those objectives are met they can come home and be with their families. Our objective in Syria was always to retake the territory controlled by ISIS. Some people said we’ve already retaken 99 percent. That’s a number that comes up a lot. And if you look at the map, before and after, it looks like 99 percent.

Now that we have done so, the nations of the region must step up and take more responsibility for their future. And also, they have to confront those remnants of ISIS and take them out very easily — if, after we’re totally finished, they’re even left at all.

There will be a strong, deliberate, and orderly withdrawal of U.S. forces from Syria — very deliberate, very orderly — while maintaining the U.S. presence in Iraq to prevent an ISIS resurgence and to protect U.S. interests, and also to always watch very closely over any potential reformation of ISIS and also to watch over Iran. We’ll be watching.

While American might can defeat terrorist armies on the battlefield, each nation of the world must decide for itself what kind of future it wants to build for its people, and what kind of sacrifices they are willing to make for their children. America shouldn’t be doing the fighting for every nation on Earth not being reimbursed, in many cases, at all.

If they want us to do the fighting, they also have to pay a price — and sometimes that’s also a monetary price — so we’re not the suckers of the world. We’re no longer the suckers, folks. And people aren’t looking at us as suckers. And I love you folks because most of you are nodding your head this way. We’re respected again as a nation. We’re respected again.

America is safer, and peace is more possible because of the incredible courage and devotion of every patriot here tonight. Some people say, “Well, maybe somebody comes from the area, and they hit us on our homeland.” If that happens, they will suffer consequences over here like nobody has ever suffered before. (Applause.) Let me just tell you. And I hope they hear that loud and clear. And that’s not a threat; that’s going to be a fact. If anything should happen at all, nobody will ever have suffered the consequences that they will suffer. Just remember I said it.

THE PRESIDENT: We will honor — you’re welcome. You’re welcome. (Laughter.) We will honor your service by doing everything in our power to defend our homeland and to stop terrorists from entering America’s shores. And that includes the strengthening of our borders.

I don’t know if you folks are aware of what’s happening. We want to have strong borders in the United States. The Democrats don’t want to let us have strong borders — only for one reason. You know why? Because I want it. (Laughter.) If I said — you know, I think, just standing here looking at all these brilliant, young faces — these warriors. You’re warriors. You know, you’re modern-day warriors. That’s what you are.

No, we have to have it. And, you know, not only human trafficking; drugs; illegals; a lot of criminals — bad records. We’ve seen murderers come in through the — you saw what happened with the caravan, as we call it. A caravan of thousands of people.