Washington is once again gripped by the specter of a government shutdown, as Congress and President Trump negotiate an end-of-year spending deal. A main issue of contention is funding for President Trump’s border wall. Sadly, but not surprisingly, neither Congress nor the administration is fighting to cut, or at least not increase, spending.

A big beneficiary of the Republican spending spree is the military-industrial complex. Republicans have increased the “defense” budget by eight percent in the past two years. President Trump and congressional Republicans claim the increases are necessary because sequestration “decimated” the military. But Congress, with the Obama administration’s full cooperation and support, suspended sequestration every year but one, so the planned cuts never went into full effect. Congress and Obama also “supplemented” the official military budget with generous appropriations for the Pentagon’s off-budget Overseas Contingency Operations fund. Spending on militarism increased by as much as 600 billion dollars over the amounts allowed for under sequestration.

President Trump has proposed reducing the projected military budget for fiscal year 2020 to 700 billion dollars. This would be a mere two percent cut, yet the usual voices are already crying that this tiny reduction would endanger our security. If history is any guide, the military-industrial complex’s congressional allies and high-priced lobbyists will be able to defeat the president’s proposed reductions and convince President Trump to further increase the military budget.

This huge military budget has little or nothing to do with America’s legitimate security needs. In fact, as candidate Trump recognized, America’s military interventions in the Middle East have endangered our security by empowering terrorist groups like ISIS and al-Qaeda.

While the warfare state has been a big beneficiary of the Republican spending spree, the GOP has hardly neglected the welfare state. Domestic spending has increased seven percent since 2016. Except for a half-hearted attempt to repeal Obamacare and some food stamp reforms that were included in and then dropped from this year’s farm bill, Republicans have not made any effort to roll back or even reform the welfare state.

The farm bill, which Congress is expected to pass this week, will spend as much as 900 billion dollars over the next ten years. Much of that spending will be on taxpayer subsidies for wealthy farmers and even “farmers in name only.”

Trump’s budget deals have been supported by the majority of Democrats. Even those who have called for the president’s impeachment are more than happy to vote with him when it comes to increasing spending and debt. These Democrats are the mirror image of 1990s Republicans who made a big spending deal with President Clinton while simultaneously trying to impeach him. 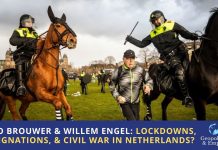