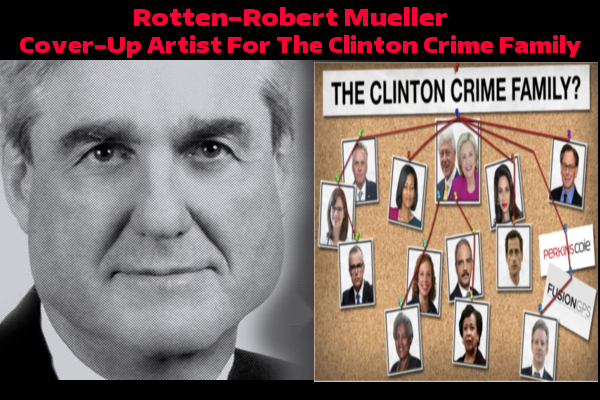 If the US Justice Department under Loretta Lynch and the FBI under crooked cop James Comey had spent as much time, taxpayer money and serious effort investigating the crimes that were continuously being committed by Barack Obama and Hillary Clinton against America and the American people as they are now upon President Donald Trump, Obama and Hillary should have both long ago been tried, convicted and executed for treason.

With President Trump once again calling out the total and utter hypocrisy we’ve been witnessing from the Special Counsel office of crooked cop Mueller, we thought we’d turn our eyes today to this December 13th story over at the Washington Times written by former Illinois governor Rod Blagojevich, whose friends and family were also terrorized non-stop by Mueller and his gang of stasi terrorists. And as we hear from Rod, a Democrat mind you, it’s long past time to put a stop to rotten-Robert’s witchhunt against President Trump as he’s using the same kind of stasi tactics against him.

As Rod tells us in his story, nothing less than freedom in America is at stake if rotten-Robert gets away with what he’s doing now to President Trump, a very real attack upon our Constitutional Republic in America. And as we learn further below, one of the business associates that Mueller terrorized in Blagojevich’s case was driven to suicide by Mueller. We thank ANP reader Maria for making us aware of this story that should make your blood boil. From the Washington Times.:

For too long, the Department of Justice and the FBI have pursued high profile investigations with virtually unlimited power. They often intimidate and humiliate subjects and terrorize their family, friends and associates. And the courts have even allowed them to use trickery and deceit as a legal tool during interrogation. But as the saying goes, “power corrupts and absolute power corrupts absolutely.”

Dec. 9 marked 10 years to the day since then-FBI Director Robert Mueller directed federal agents to arrest Rod during that now infamous predawn raid. And it was only recently that we learned that they brought with them a SWAT team and a hostage negotiator. (ANP: Rod’s wife Patti co-wrote this story, hence the reference to ‘Rod’ instead of ‘I’.)

In a recent interview, the FBI agents involved in the arrest revealed for the first time that they had prepared for an armed standoff with our State Police security detail. This kind of firepower is only warranted when the subject of the arrest is a danger to the community or constitutes a flight risk. As the sitting governor of Illinois, Rod was neither. And despite their unnecessary and ridiculous preparations, he surrendered peacefully.

Later that morning, they locked Rod in a cell after he refused to agree to plead guilty to their nonexistent crimes. Rod’s refusal to cooperate, locking him in a cell and the labeling of the charges with a catchy name like the “selling of the Senate seat” were all a part of the psychological warfare they used to try to break his will to resist.

First bring the shock and awe. Then, later at the press conference, tell the big lie. This wasn’t mere prosecutorial overreach. This was a deliberate effort to intimidate us to get what they wanted. The fix was in, and the smear campaign was in high gear. History would later prove that discussions related to the Senate seat were perfectly legal and, during an appeal, judges threw those charges out.

We’ve since learned that federal prosecutors can lie, cheat, manipulate and minimize evidence. If you think this can’t happen in the courtroom or during an investigation, look it up. They also suppress, hide and cover up exculpatory evidence — evidence that shows innocence. And they put gag orders on evidence they created like taped conversations. In our case, they prevented the jury from hearing most of the tapes because they prove innocence. To this day they won’t let the public hear them. And along with our attorneys, we are still under acourt order to not tell anyone what is on them. 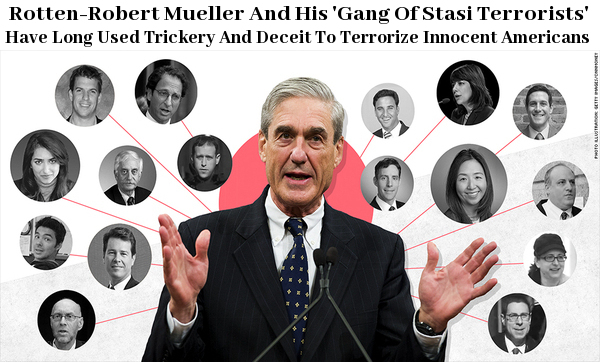 As mentioned above, Blagojevich’s story goes on to detail for us how Mueller’s stasi terrorizing one of his associates actually led to this man committing suicide, proving once again that very real lives were ruined by Mueller, just as he’s ruining very real lives of good people such as General Mike Flynn in his witchhunt against President Trump.

He goes on to call Mueller nothing less than a political hit man with total immunity to do whatever he wants to anybody and as Jerome Corsi recently mentioned, Mueller’s gang of paid terrorists has unlimited power to destroy as many lives as they want while they themselves can lie through their teeth with complete immunity. How long will rotten-Robert continue to get away with terrorizing innocent Americans standing in the way of his mad stampede to nowhere? Once again, from Blagojevich in this Washington Times story.:

So today, we offer this warning to the American people and call for the special counsel investigation to end immediately. Here’s why.

Robert Mueller and his team of prosecutors are unelected bureaucrats with fancy law degrees who have made their careers as political hit men. They are armed with unlimited and unrestrained power and can do almost anything they want in their capacity as prosecutors because the law protects them with immunity.

And they are masters of the political witch-hunt through the use of nonexistent crimes and the setting of perjury traps. It’s an art that they’ve perfected over a long period of time. And their politics of personal destruction have real-life consequences. After a close friend and trusted adviser refused to cooperate with prosecutors and testify against Rod, they went after his private business dealings and for tax evasion, and sentenced him to nine years in prison. When he still refused to cooperate, they threatened to add additional new charges and more prison time. Tragically, the stress was too much for him and he took his own life, leaving behind a beautiful family.

This isn’t a Democratic issue or a Republican issue. This is an American issue. These rogue, uncontrollable prosecutors are a real threat to our democracy. And if they keep getting away with what they are doing, they will destroy our freedoms.