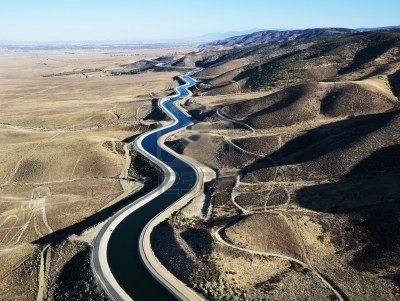 As a researcher, I have come to appreciate the importance of timing. There are times when I have uncovered something that poses a threat to America, but the context of the threat does not yet exist, so the event is in limbo. Often, hears later, events crystallize and the outlying fact becomes obvious to all that have eyes to see.  i have come across such an event and it involves the weaponization of water.

Before walking the reader down the path of contrived water shortages for political gain, there is something that has to be said about the California State Legislature and Governor Jerry Brown. California is a state that is complete rebellion from the United States. The CALEXIT movement is move designed to not only exit California from the Union under the control of the United Nations, they are a state that can be accurately classified as a sanctuary state. They harbor murderers, rapists and drug dealers. The exit of California from the United States would destroy retail and agriculture on a national basis. Most California legislators need to be arrested for sedition.

CALEXIT if failing and proponent, California Governor Jerry Brown, is leading the charge to empty California from anyone who would oppose the globalization of America as expressed in the CALEXIT desire to make California so unliveable, that the upper and middle classes exit the state.

Republican U.S. Rep. Devin Nunes, R-Tulare, didn’t link to the post, but he expressed his frustration on his private blog that Californians would face “draconian” showering and laundry restrictions because of “environmental extremists and the Democrats.”

“Californians don’t want to have to choose between doing their laundry and taking a shower,” he said.

Joe Walsh, a conservative radio host and former congressman shared a link to the blog post Monday and added: “California is awful. Just awful.” And he’s right. California has indeed weaponized water in order to achieve a political goal.

How much is the fine if you dare to take a shower, do laundry, AND run your sprinklers all in the same day?

Assemblywoman Laura Friedman, D-Glendale, the author of AB 1668 perpetrated a bill that gave California the power which made it illegal to take a shower and do laundry on the same day. $1,000 fine if you go above your allotted 55 gallons of water per day. Utility companies are encouraging neighbors to spy on neighbors to ensure compliance.

The liberal establishment has minimized the effects of the law, but offer no facts in opposition. Here is an analysis:

The restrictions are omnipresent:

This bill became law last summer. However, recent events have taken this to an entirely new level.

Deborah Tavares maintains a sight called Primary Water. On the sight are numerous articles which destroy the myth that California has a water shortage. Emphatically, and more important, empirically, the water shortage claim is blatantly false.

Speaking of Deborah Tavares, I recently interviewed her. The interview will air this coming Sunday. During the course of the interview Tavares emphatically made the point that nobody will be able to water outside their house. This will turn arid and semi-arid areas into a tinderbox. This is Governor Brown’s prescription for more fires and the dry brush will act as a lightening rod for the wild fires.

From my personal perspective, I see water being used in a variety of ways. First, people of any means will seriously consider leaving California which plays right into the hands of the CALEXIT group. They are happy with the notion of using migrants as a replacement population.

On a more ominous note, Tavares believes that severe fires are coming to every state. One thing is for sure, Governor Brown,he California State Legislature and CALEXIT are indeed weaponizing water for political purposes.

The world is full of examples where food and/or water are weaponized for political purposes.

Venezuela Is The Canary In The Mine

The real story in Venezuela is not the declining dollars, but the emerging water crisis. The situation is turning very threatening to well-being of the population. If the socialist leaders in Venezuela continues to serve the banksters and the preferred insiders, the water crisis could lead to a civil war, if the existing food crisis doesn’t. In fact, there are widespread water shortages across the planet that threaten to push the entire planet into a state of perpetual state of social unrest and even war could break out over control of this most precious resource.

According to the United Nations research and scientific studies, nearly two-thirds of the entire population inhabiting the planet will face severe, life-threatening water shortages by the year 2025. The reasons most often cited for the water shortages are waste and poor planning which will result in uneven distribution.