But no letup in freight rates yet.

In November, according to transportation data provider FTR, orders for new Class-8 trucks — the heavy trucks that haul the products of the goods-based economy across the US — plunged nearly 50% from July and August, 35% from October, and 15% from November 2017, to 27,500 orders, the lowest all year.

This chart shows the percent change of Class-8 truck orders for each month compared to the same month a year earlier, which eliminates the effects of seasonality: 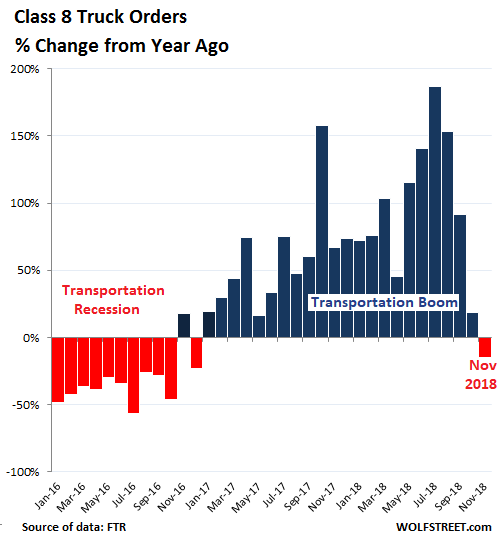 Red-hot demand for transportation services this year and late last year, especially by truck, caused shortages, spiking freight rates, shipping delays, and more gray hair among shippers, while truckers were scrambling to order new trucks to meet the demand, and truck makers, swamped with orders saw their backlog balloon to 11 months, and records were broken on a monthly basis. But suddenly the hot air is hissing out of the market.

The chart above shows just how cyclical this business is:

Truck makers aren’t going to hurt just yet. Over the past 12 months, Class-8 truck orders have reached nearly 500,000 according to FTR data. Truck makers are running at capacity, building trucks at an annual rate of about 320,000 units. Some cancellations have started to come in, but the backlog extends way into next year. The chart below shows that orders in November plunged from the super high levels that had peaked in July and August at 52,000, but were still above the levels of the transportation recession: 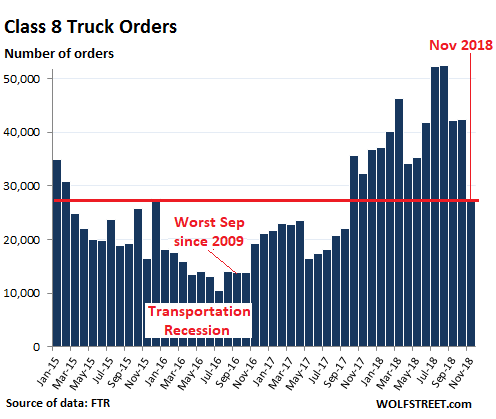 “27,500 is not that bad of a number,” said Don Ake, FTR vice president of commercial vehicles.

Truckers were motivated to put in these record orders earlier this year because freight demand had been enormous, and there wasn’t enough equipment to move it, and they were able to raise rates and make more money. Now they see demand backing off, and overcapacity, created during boom times is precisely why this industry is so cyclical.

And growth of demand for transportation is now stalling. Freight shipment volume across all modes of transportation – truck, rail, air, and barge – was essentially flat in November compared to November 2017, and about flat with November 2014 (the other recent banner year), according to the Cass Freight Index. This year-over-year no-growth is down from growth in the double-digits earlier this year. The index covers merchandise for the consumer and industrial economy but does not include bulk commodities, such as grains or chemicals: 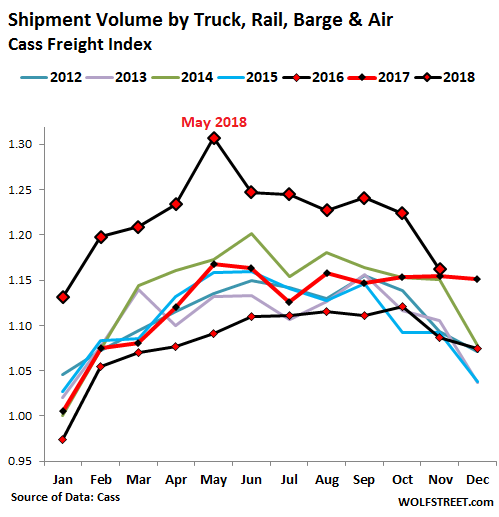 The chart above shows just how powerful the boom in late 2017 and in the first three quarters of 2018 had been. Note the seasonal drops starting in October every year – except in 2017 (red line). This was the beginning of the boom that has now run its course, with shipments still strong, but flat with November 2017 and November 2014.